“Where do you want to go for your birthday?” asked Mr Rooster Cluck. “Or, more to the point, what would you like to eat?”

“How about some roast human?” Master Cluck, whose given name was Cock, answered. “It’s been a long time since we had any.”

Mrs Hen Cluck, his lady mother, made a face. “Roast human?” she asked. “Couldn’t you think of something more...decent? Like sweet roasted wheat or something?”

“Oh, all right,” Rooster Cluck said. He squeezed his wife’s wing sympathetically. “We can always go out again on the weekend and have that wheat,” he told her.

“It’s just that I worry about him,” she answered. “Roast human! It’s so common. I worry about the kind of friends he goes around with. They’re ruining his mind.”

“What’s wrong with his friends?” asked her husband, but absently, not listening to her answer. He bent his head in the mirror and thought about exactly how he ought to adjust his crest. Just a little over to the left, he decided, and the wattles to hang naturally. After all, it wasn’t as though they were going to some posh place. Roast human didn’t merit too much dressing up, and for that he was secretly grateful.

They drove over to the Kentucky Fried Human outlet on CockADoodle Avenue. Mr Cluck drove, as usual, somewhat flashily. He hadn’t, he would tell his wife when she tried a bit of back-seat driving, scrimped and saved to buy a car just to slink along as though he was ashamed to be seen in it. He pulled up in the parking lot in a spray of chickenfeed.

“Three servings of Premium Grilled Human, extra crunchy,” he allowed Master Cock Cluck to tell the waitress. It was his birthday, after all. The waitress glanced at Rooster to confirm the order, which he did with a nod. She went back to the kitchen hatch.

“This place needs a bit of doing up,” Rooster Cluck observed.

“Careful, dear,” Rooster told her. “You know that isn’t the right thing to...”

Just at that moment there was a loud explosion and part of the front wall fell in. Three big chickens wearing green crest-covers and masks ran in through the dust and smoke, firing at the ceiling with assault rifles. “Don’t move and nobody loses a feather!” they crowed over the sounds of screaming and the automatic fire. “Freeze, or you’ll wish you’d never been hatched!”

“What the hell?” Rooster Cluck began, but he never finished, because he found himself with the barrel of an assault rifle at the tip of his beak. He looked up the length of the weapon at the glaring yellow eyes of a furious green-masked chicken.

“I thought I told you not to move,” the green-masked chicken said.

“You said I wasn’t to move,” Rooster explained. “I didn’t. You never told me not to speak.”

“What are you, a lawyer?” the chicken clucked in disgust. “I might have known,” he said, as Rooster nodded. “That’s all we needed.”

“Who are you chickens anyway?” Rooster asked. “Is this a robbery? Is that what it is?”

“Silence!” one of the other chickens yelled, and fired a burst into the ceiling to emphasise his point. He sprang up on the countertop. “We’re taking this place over,” he yelled, “in the name of Chickens for the Ethical Treatment of Humans.”

“Yes,” the two other chickens cackled. “It’s the beginning of the war for the soul of the chicken race!”

“You chickens,” the green-masked chicken on the countertop said, “make me sick.” He paused a moment. “Make us sick,” he amended. “The way you scrunch, crunch and gobble down human meat, with never a thought about the conditions under which those humans are raised.”

“And slaughtered,” the chicken with his gun at Rooster’s beak reminded.

“And slaughtered. Have you visited the human farms recently? Well?”

There was a brief pause. It grew to be a long pause.

“You told us not to speak,” Rooster said when the pause seemed all set to become interminable.

“You told them not to speak,” his masked chicken passed on.

“Anyway,” said the countertop chicken, “it doesn’t matter. We have videos. And we have Cluckella Cluck, the actress, on our side.”

“Cluckella Cluck?” Rooster rose from his seat. “But...”

“I’m not going to warn you again!” his masked chicken screamed.

“But Cluckella Cluck is my sister,” Rooster shouted. “You contact her and see what she says about what you’re doing here.”

“You idiot, Rooster,” the third armed chicken yelled, pulling off her green mask. “I’m right here, and if you open your beak one more time...”

“Aunt Cluckella?” Cock Cluck burst out laughing. “Weren’t you eating human right along with us the last time you visited us?”

“Is this true?” the chicken on the countertop enquired in a terrible voice, glaring at Cluckella. “Have you contaminated yourself with the taint of human flesh?”

There was a sound of sirens from outside, and the engines of many cars. “Come out with your wings up!” someone crowed through a megaphone. “This is the Cockapolice!”

“I suppose you’ve had human too?” the chicken on the countertop asked Rooster’s masked chicken, ignoring both the megaphone and Cluckella.

“Well, just once,” the chicken confessed. “Or it may have been twice...”

“I give up.” The chicken on the countertop pulled off his mask and flung it down. “I’m surrounded by hypocrites and incompetents!” He jumped off the counter and dropped his gun. It fired and put a neat hole through the Kentucky Fried Human logo of the smiling Cockerel on the wall. “I’ve had enough of this,” the chicken said. “I’m going over to the non-violent path.” His voice became dreamy. “I can just see the new, peaceful CETH,” he said. “Chapters in every nation of the world. Thousands of members. We’ll picket places like this and send people on guilt trips. We’ll dress up as humans and lie around on street corners. We’ll rope in vegetarian celebrities. We’ll claim vegetarian chickens have better sex and lay stronger eggs. We’ll get funding from the vegetarian food companies.” He turned a dreamer’s eyes to the other two. “Let’s surrender and get it over with, then.”

“Why not?” All three chickens looked at him. Every chicken in the place looked at him, even those who had sheltered under the tables at the first explosion and were yet to emerge. “Why can’t we?”

“What about us?” Cock Cluck said. “You have to at least wait until the TV cameras turn up and make this an international spectacle. That way all of us at least can make a fortune selling our stories to the networks. How I survived the terrorist siege, and so on.”

“Watch whom you’re calling a terrorist.”

“Sorry,” said Cock contritely. “But my point’s still valid. You ought to wait till they bring in hostage negotiators and a SWAT team.”

“Besides,” Cluckella said, “it’s going to inform the whole world about our agenda.” The ex-countertop chicken glared at her. “I’m just saying,” she mumbled.

“Ohhh...” a hen across the room groaned. “I’m laying, I’m laying. The contractions are beginning.”

“Is there a doctor in the coop?” her male companion shouted. “My girlfriend’s in trouble!”

“I seriously doubt that,” Hen Cluck muttered. “She’s about to lay her golden egg, that’s what it looks like to me.”

“Excuse me, dear.” Rooster Cluck rose from his place and went over to the groaning hen. “Ma’am,” he said. “I’m a contract lawyer, and I strongly suggest you let me handle your negotiations with the networks. After all, you must realise that laying an egg under such circumstances means that you’re a valuable media property now.” He fished around in his pocket. “Here’s my card.”

“Look here,” the former countertop chicken said, jerking his beak at Cock. “You go out there and tell them that we’ll be sending out a female hostage who’s been taken ill.”

“No!” Rooster Cluck yelled. “Ask them to send a doctor in. My client’s not going anywhere without a signed contract for her first-hand story!”

“Do as he said,” the ex-countertop chicken said, shrugging. He thought. “And tell them we’ll be coming out with our wings up...but only when we get signed contracts from the TV networks. Do you understand?”

“I do.” And Cock Cluck emerged from the shattered door of the Kentucky Fried Human outlet into the lenses of a hundred TV cameras. Even the hardened network bosses agreed he looked good.

“Get the SWAT teams,” he told the police. “And interview me, damn it!” he told the TV cameras. “I’m media gold, if only you had the sense to see it!”

And that, cockerels and hens, is the real inside story of how the Great Big Siege of the Kentucky Fried Human franchise all began, which you’ve been reading about in the papers and watching on TV, and which is now in its third day. Apparently, agents from both sides are in consultation over movie rights, and aren’t far from reaching an agreement.

A surrender is expected tomorrow, just as soon as the international news networks all get here. 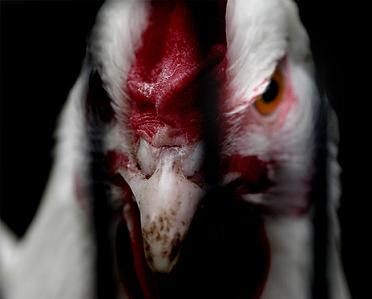