All Pentagon On The Hollywood Front

Or, Why Hollywood isn't remaking "All Quiet On The Western Front". 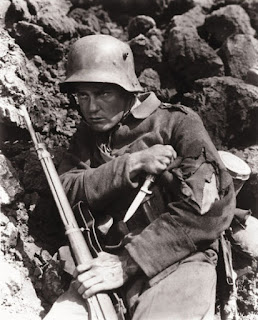 
It is an immensely important scene, one of the high points of the book and the movie; the other is when Bäumer goes home on leave and finds that the civilians at home not only understand nothing of the war but are still pressuring their children to join up and go to the front.
These are not themes that will be popular with the Pentagon today.
Even the description of combat in the book is brutal. The original 1930 film (and a not too bad 1979 made for television remake) both totally sanitise the violence, but the book doesn't. During an attack, Bäumer trips over "an open belly, on which a fresh new officer's cap was lying". His friend uses a sharpened spade to cleave a giant French soldier down to the shoulder. Bäumer's friend Haie Westhus has his back blown open so his lungs can be seen as he breathes; he's still not only alive but conscious, biting his hands in agony. So it goes.
If Hollywood were even remotely true to  its alleged liberal reputation, which of course it is not, it would have remade All Quiet for the 21st century, maybe in 3D. Rats, mud, corpses, the doubtful affections of French prostitutes, roasting stolen duck in a former kennel, crouching in a dugout under a barrage while new recruits go insane from fear, all of it.
Not one bit of it would have brainwashed one single person to get into uniform, so of course it will not happen.
The original German title of "All Quiet On The Western Front" is "Im Westen Nichts Neues", which is much better translated as "Nothing New In The West."
Im Hollywood Nichts Neues either.
Posted by Bill the Butcher at 4:48:00 pm 1 comment: