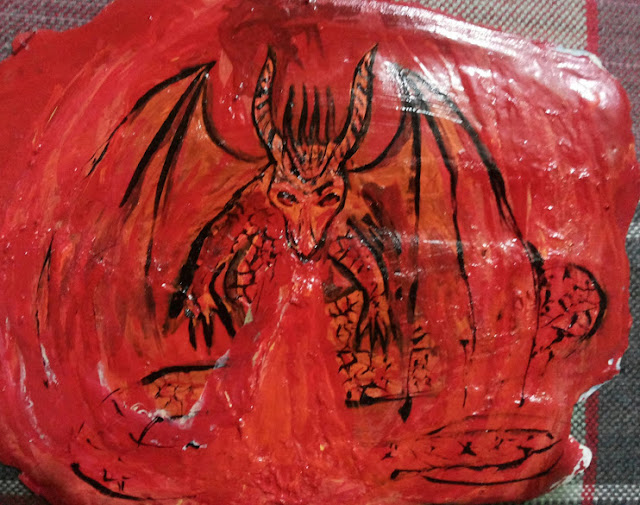 Title: FiredragonMaterial: Acrylic on PlasterCopyright B Purkayastha 2015
The problem with surfaces other than paper is that one can't scan them and things like texture (on which I spent a lot of time here, layering paint) aren't visible on photos.I'm posting two versions - one as photographed (below) and one
Posted by Bill the Butcher at 8:07:00 am No comments:

Somewhere inside my head, in the depths of my cranium, there lives a monster.

If I could draw this monster, I would give it a beak like an eagle, claws like a giant anteater, and the predatory instincts of a hyena. I would clothe it in armour-plated scales, and give it a tail with a spiked end like a scorpion. I would give it venom, and the patience to wait for decades for its moment to come.

What I would not need to do is make it hate me.

Yes, it hates me, this monster. It hates me for confining it inside the bony prison of my skull, where it has not the space to spread its membranous wings. It hates me for being me. And so, quite logically, it does its very best to destroy me.

I remember the time I first realised the monster existed. I was eighteen, and lying in a hospital bed after a series of suicide attempts, and I could feel it inside there. Slithering around in the bloody darkness, infuriated that it had not escaped, and determined to try again.

If I could talk to the monster, I would say, I did not confine you. I did not imprison you.

I cannot tell the monster this – or anything else. It does not listen to me.

And why would it? I am its enemy, and it wants to be free.

So it crouches, and it waits, for its time to come round again. We both know it, and we both know that someday it will claw its way free. But not yet, not now. I am not ready to grant it its freedom.

Poor monster. If I could let it go, I would. It gives me no pleasure to hold it inside me.

Last night I had a dream. I dreamt of a journey on a train, to a destination that I did not want to reach – and yet, I could not stay where I was either. I got on the train, and I had a sudden doubt whether it was even the same train as I wanted. By then the train had stopped at a small station, and I tried to get off. I could not get off because of the huge number of people trying to get on. And the train started again.

Then I was at a house with my grandmother, who was alive and well. It was night, and I could only be with her a few minutes. She took me past her garden to show me her beehives – her tiny beehives, made of earthen pots. She took one of them up, and covered it with a little net. All the bees flew into the net except for a few stragglers, which did not sting.

And I looked in the pot, expecting to find fish fillets in honey. Instead, there were entire fish, packed side by side, and they were alive, and moving sluggishly, struggling to breathe in the honey. My grandmother, who would literally not hurt a fly in her life, was drowning fish in honey.

Somewhere in my skull, the monster was laughing.

Don’t be so impatient, monster.

I’m in no hurry to let you go. There’s still too much of living in me.