Urgent! Stop Putin Before It's Too Late!

Ladies and gentlemen, these are perilous times!

As you know, the evil half naked tyrant of Russia, Vladimir Putin, is determined to conquer and enslave the entire planet, and to that end, has weaponised everything from elections to cartoons to laughter!

Not satisfied with this, the vile Russian dictator has linked up with the most evil and unscrupulous despots in the world today, like the unspeakable Assad of Syria, who spends his spare time gassing his own people with sarin for fun, or the just as evil Maduro of Venezuela, who tries to behave as though the oil reserves of his country belong to its people, and not by birthright to American Wall Street corporations!

But wait - I'm not even scratching the surface of the vileness of the Putin regime's crimes!

Just a few days ago, the mass murdering tyrant sent four long range planes, including two supersonic Tupolev 160 heavy bombers, to Venezuela in a show of support for the Maduro regime, which spends its time starving its own people for fun, just like the Assad regime gases its own people with barrel bombs full of sarin. 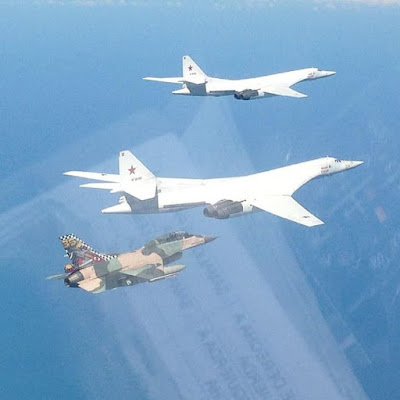 This was done in a blaze of publicity, because, of course, the evil Putin regime wants to distract the attention of its own people from the fact that they are all freezing or starving or being tyrannised to death!

Of course, that was not the only reason, as you can well imagine.

One of the excuses given by Putin apologists for the Russian deployment of the bombers to the Venezuela regime is the absurd claim that the only purpose of the visit was to serve as a deterrent to an American "invasion" of that country. As though America ever "invades" anyone instead of just engaging in wars of liberation where it drops humanitarian bombs which bring people freedom from the cares and toil of life. And as though taking oil that is America's by birthright would be illegal in any way! I ask you! 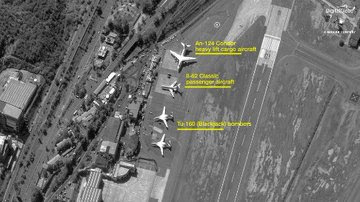 Now, and interestingly enough, these aeroplanes were swiftly withdrawn back to Russia after only a couple of days, instead of permanently occupying the Venezuelan airport like any red blooded NATO air force would have. 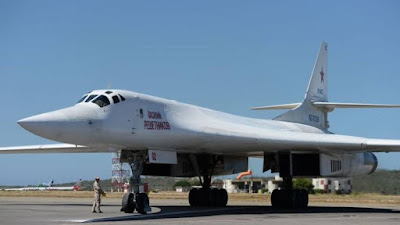 The absurd narrative of the Putin apologists is that Russia was making the point that in case of a planned or attempted "invasion" (that is, a freedom-loving American liberation) of Venezuela, the bombers, and others like them, could be back within hours, and this time to stay.

Wrong! Their purpose was far more evil and sinister than that!

Here, for the first time, we can reveal the actual plan of the Putinite KGB Communist regime against the freedom-loving people of the West!

As exposed by a defector by the name of Pladimir Vutin, who is obviously the exact opposite of the Russian tyrant in every way, and who sneaked out of the back door of the Russian embassy in London, this is what really happened!

A few weeks ago, a Russian expedition in the forests of Venezuela, comprised of GRU spies pretending to be "zoologists" and "botanists", encountered a living female Tyrannosaurus rex in a cave. This dinosaur had somehow survived the 65 million years since the extinction of its species, and was even larger and more fearsome than anyone can imagine. With great difficulty they captured the beast, after it had only eaten three or four of the team, and brought it back to their secret base in Caracas,  the so called capital of the country, and informed their overlords in Moscow.

You can, I am sure, imagine for yourself what happened next. The vile Putin regime already weaponises anything and everything, and at once saw an opportunity. It sent the bombers to Venezuela on the excuse of a deterrent exercise, but that was only a camouflage for the real purpose.

That purpose? To bring back the captured Tyrannosaurus to Russia in one of the returning Tu 160 bombers, in order to clone the beast and make eggs from it. Many, many eggs.

And what would be done with those eggs, you ask? Isn't that obvious? Those eggs are to be seeded in Western cities, to hatch into more Tyrannosaurs, which will then eat freedom-loving Western civilians left, right, and centre, MAGA hats, rainbow flags and all, until there is nobody left!

Here is undeniable evidence: a photograph provided by Pladimir Vutin, showing the dinosaur being transported from Moscow airport to the secret Putinite regime biological warfare base outside the capital!

It is essential that we all ask our regimes to start WWIII at once! Russia must be destroyed before it is too late!
Posted by Bill the Butcher at 1:35:00 pm No comments: