The Troll Under The Bridge

Once upon a time there was a troll who lived under a bridge.

The troll didn’t like living under a bridge. It was always damp there, and shadowy, and the banks overgrown with weeds apart from being plentifully decorated with rubbish thrown off the bridge by people crossing it. The water of the little river the bridge spanned was also turbid and smelt of mud and algae, and sometimes the effluent of chemical plants upstream, making the troll’s sensitive nose burn. And the place was always buzzing with mosquitoes, which feasted on the troll’s blood despite his immensely thick skin.

It was therefore with excellent reason that the troll hated living under the bridge.

The troll was very young, and his name was Fungy. The name had been inscribed, as it always is with trolls, on the inside of the egg in which he was laid, so that it had been the first thing he’d seen when his eyes had developed. It had annoyed him immensely that he hadn’t even been able to choose his own name, and he’d been determined to demand a new one as soon as he’d hatched.

The only problem was that when he’d hatched there was nobody to demand it from.

Fungy, in fact, had never known his parents, and had no idea how his egg had ended up where it had. Perhaps some human, finding it elsewhere, had thrown it away. Perhaps it had floated down the river and lodged under the bridge. Perhaps his mother had laid him there and then gone away, meaning to return. It was impossible to tell.

So Fungy had grown up alone and friendless. He’d never even had anyone to teach him the rules of troll behaviour. He therefore didn’t destroy anything he didn’t understand, including the occasional boat that came down the river. If three billy goats gruff were to come tripping over the bridge, he wouldn’t have tried to eat them; he would rather have helped them on their way. He didn’t eat people who crossed the bridge either, not a single one, not even if it were a fat capitalist oppressor of the proletariat. He only knew that he was lonely and he hated living under the bridge.

One night, Fungy was sitting on the river bank, under the bridge, looking for rats to catch and eat. He saw a particularly large and juicy rat emerge from a hole under a bridge piling, and was just about to pounce on it when the rat squeaked, jumped backwards, and dived back into its hole. Trying to see what had frightened it, Fungy found himself face to face with a large owl.

“What did you scare my rat for?” he demanded. “I was just about to catch it.”

“Your rat!” the owl hooted. “I like that. It was my rat, and if you hadn’t been a gluttonous troll you’d have let me get it.”

“Gluttonous troll?” Fungy repeated angrily. “How dare you call me that?”

If the owl could have shrugged she would have done so. Perching on a bush that grew on the bank, she set to preening her wing feathers. “All trolls are gluttons. Don’t tell me you aren’t. You eat people who cross the bridge, you eat people who come down the river on boats, and you still want to rob an honest, hardworking owl of her rat. Of course you’re a glutton.”

Fungy’s eyes were bugging out during this litany of accusations. “Eat people?” he squeaked. “I never did.”

The owl regarded him with her great eyes. “You know,” she said at last. “I even believe you. You look like you don’t know a thing about anything. Didn’t anyone ever tell you about how to be a troll?”

So Fungy told her about his life, and by the time he finished she was shaking her head. “You poor thing. Well, there’s only one thing you can do: go to the Great Troll under the Bridge to Nowhere and ask him to help.”

Fungy frowned. “How do I get there? I don’t know the Great Troll and I’ve never heard of the Bridge to Nowhere.”

The Bridge to Nowhere starts at the Edge of the World, and leaps out into the void. Under the near end, in a cave just below the Edge, lives the Great Troll. He is so large that he never leaves his cave; if he did, he could never get back inside again.

To reach this cave from Fungy’s bridge would normally have taken a trek of centuries through forests and deserts and the cities of Man. But the owl, who knew the paths of moonbeams, taught him how to walk along them, and so the two of them came to the Edge of the World in the space of a single night.

There stood the Bridge to Nowhere, arching out over the Void, and at its near end the steps that went down to the Great Troll’s cave. Nearby there grew strange trees with fruit that had faces and eyes and teeth, and these the owl told Fungy to gather as a gift to the Great Troll. Everyone who visited him had to bring a gift of food, for he, being too large to leave his cave, had perforce no way to get any for himself.

Then, climbing down the stairs with his arms full of the fruit, which jabbered and tried to bite him, Fungy came to the cave. Still preceded by the owl, he then entered.

The Great Troll’s cave is a curious place. It twists and turns, always to the left, but somehow never manages to double back on itself. And though there are no lamps, there is always light, white and red and green and blue, from great diamonds and rubies and emeralds and sapphires set in the walls and the ceiling. The smallest of those stones would require a pickup truck to carry; but the Great Troll is not worried by thieves. None, be they ever so skilful, are stupid enough to try.

In the furthest, leftmost, reaches of the cave sits the Great Troll himself, on a throne carved from the skull of a dead god. The Great Troll slew the god in single combat; he has earned the right to such a throne. By his side sits his great cudgel, large enough to crush the mightiest war machines of Man; not even a god, after the last one, dares brave that cudgel.

When Fungy and the owl entered the chamber of the throne, the Great Troll had been meditatively tapping his cudgel with one claw, while thinking that it had been a good long time since he had had reason to use it; and smiling horribly as he caressed the throne with the other hand, remembering how he had used it last. So he was in an exceedingly good mood, and genially greeted his visitors with a voice that was only like slightly muted thunder.

“What is it you want?” he asked, after accepting and swallowing the fruit, which were still jabbering and screaming and trying to bite.

“Honoured Great Troll,” the owl said, “my friend here has never been taught about how to live as a troll. He would like to express his troubles to you, and beg for a solution.”

The Great Troll looked at Fungy, and made a terrifying attempt at an encouraging smile. “Tell me everything,” he said.

So Fungy did. The Great Troll listened, his head tilted on one side, and remained silent until the discourse was finished.

“To take your problems in turn,” he rumbled eventually, in a tone like a volcano about to erupt, “first, your name. If you do not want to be called Fungy, that is easily remedied. I hereby rename you Zkhrrp Rateater. Is that all right?”

Zkhrrp Rateater gulped and nodded. “Then,” said the Great Troll, “you do not want to live under a bridge. Now, it is an unfortunate but inescapable fact that there has always been a connection between trolls and bridges. We cannot exist without bridges. It is not known whether bridges can exist without us.”

“Therefore,” the Great Troll continued, “while I sympathise completely with your desire to not live under a bridge, it is impossible for you to liberate yourself from the cursed contraptions. There’s nothing I can do about it.”

“But I don’t want to eat humans,” Zkhrrp Rateater protested.

“You don’t have to. It’s not part of the job description. It’s just that if there’s a bridge, humans are likely to have built it, and if humans built it then they’re going to use it, so that they’re a readily available food source.” The Great Troll swallowed the last fruit. “It’s been a while since I last ate a human,” he said, meditatively. “Come to think of it, it’s been a while since I even saw a human. But even I have to live under a bridge, as you see.”

Zkhrrp Rateater said nothing for a minute. He was getting the beginnings of an Idea. He got Ideas rarely, and they never came easily, so he spent some time scratching his head and frowning as he worked his way through the process. “You said, Honoured Great Troll, that trolls have to live in connection with bridges. But do we have to live under them?”

The Great Troll stared at him. He stared at him so long that the owl grew concerned, and half opened her wings for a quick getaway. And then the Great Troll erupted in an immense burst of laughter, like a volcano that has finally erupted. “By Blong,” he said, “first and greatest of trolls, I never thought of that before! Of course we just assume that trolls have to live under bridges, though there’s no law forcing us to. We can as easily live on bridges. But,” he added reasonably, “with all the traffic, who would want to? You’d have to keep destroying vehicles just to stop yourself from being run over.  And I thought you didn’t want to eat humans.” He shuddered. “Think of all the wasted food.” He shook his head. “I’m sorry,” he said, “that your journey has been wasted. I do wish I could have helped you.”

“Honoured Great Troll,” the owl hooted, “I would like to make a suggestion, if I may.”

Ruffling her feathers silently, she began to talk.

The Bridge to Nowhere is a silver thread that stretches from the Edge Of The World into the Void. All around it, below it, over it, the Void stretches, now transparent, now filled with colours, now dark as the space between the stars. Entire universes might rise and fall but the Bridge would still stretch across the Void, its span untouched by time or decay.

Nobody knows how it came to be. Nobody knows where it ends, or if it ends. Nobody has ever attempted to cross it. Until now.

Steadily along its timeless span, below and above and through the births and deaths of universes, Zkhrrp Rateater, and the owl perched on his shoulder, walk towards the eternal future.

Someday they may even reach it. 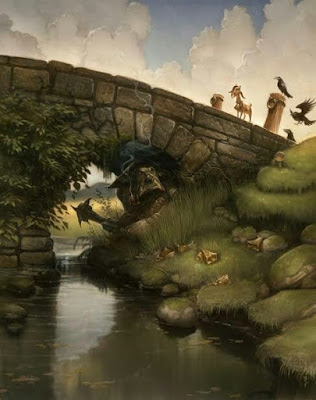