On a Case of Internal Bleaching

(This is the text of an article I wrote for the annual magazine of the state chapter of the Indian Dental Association. I'm not going to attempt to translate any of the terminology. Read it if you want, or not.)


ON A CASE OF INTERNAL BLEACHING


Aesthetics, as we all know, have become an increasingly vital part of contemporary dentistry. We still occasionally come across anterior restorations done, invariably by quacks, with silver amalgam; but in standard dentistry even such materials as silicate cements and self-curing composites are now so obsolete that nobody even remembers them any longer.


In addition to restorations, the options include veneers and crowns, and, of course, the internet makes patients aware that such treatment modalities actually exist – and that they could benefit from them.


We’re also familiar with the experience of encountering patients who want their “teeth whitened” (or, as one particular young man once told me, “whitewashed”) not just to get rid of stains on their teeth, but to lighten the colour. And invariably they know, or have heard of, someone who has had this done.


Today, therefore, the patient has not just a choice of multiple treatment modalities but knowledge that they exist, and more often than not an exaggerated idea of what that treatment might be able to achieve. This becomes a problem when it comes to situations where the patient imagines one particular treatment can work miracles, but the dentist is well aware that it will not....and, try as he or she might, he or she can’t convince the patient of this.


This is especially the case with bleaching. As we all know, bleaching has the following limitations:


First, and the patient usually will refuse to accept this, the amount of bleaching achievable is not predictable. Especially with regard to very dark stains, any lightening of colour that can be achieved will still be far short of satisfactory.


Second, it is not permanent, and with patients who are heavy smokers or tobacco/betel nut chewers, any effect achieved can disappear within an extremely short period of time.


Third, it’s of course not without side effects, most importantly sensitivity, which the patient will more likely than not blame on the dentist even if he or she has been repeatedly warned of this possibility in advance.


Keeping these factors in mind, many teeth are veneered or even crowned that otherwise might have been treated by bleaching. This is expensive in terms of time for the dentist and financially for the patient. And, keeping the average oral hygiene standards and substance chewing habits of people in this part of the country, this creates its own problems in the medium to long term.


On the other hand, there are single discoloured teeth that can be relatively safely, reliably, and economically treated by internal bleaching. This is, of course, only possible in endodontically treated teeth, thereby precluding its use in most instances; but in particular cases it can give very satisfactory results indeed.


First, it acts from within the tooth, and thus the oxygen does not have to penetrate through the hydroxyapatite barrier created by enamel. The dentinal tubules are easily accessed by the oxygen, which can therefore spread to the entire coronal section of the tooth from within.


Secondly, since it can only be performed in endodontically treated teeth, there is no question of tooth sensitivity.


Third, since the action is entirely inside the tooth, as long as there is no further insult to the integrity of the tooth by abrasion, attrition, or caries, any result achieved is long lasting and may be permanent.


In this article we shall discuss such a case.


The patient was a 28-year-old male who presented with a badly discoloured maxillary left central incisor, which he was extremely self-conscious about. He gave a history of having had endodontic treatment performed on it elsewhere several years ago, following which it had got progressively darker, until he thought he had no other option than to have it extracted and get an artificial replacement.


On radiographic examination the tooth showed an incompletely and poorly obturated root canal, but lacking any periapical pathology. There was caries on the lingual fossa of the tooth. This, with leakage of fluids into the incompletely obturated pulp chamber, causing extensive secondary caries inside the coronal section of the tooth, was responsible for the staining.


After discussion, the patient agreed to have the tooth treated by a combination of endodontic therapy and internal bleaching.


In the first step, the gutta percha that had been used elsewhere to obturate the root canal was removed. The canal was cleaned, shaped, enlarged and obturated (with Gutta Percha cone size F3).


In the second step, the carious dentine within the coronal section of the tooth was removed with a round diamond point on an airotor handpiece, being careful not to penetrate the enamel on the facial surface at any point. This also removed a great part of the staining.


In the third step, the gutta percha in the coronal part of the pulp chamber and the apical third of the canal was removed. A cotton wool pledget soaked in hydrogen peroxide was inserted into the pulp chamber and sealed inside using Cavit temporary restoration material (in order to prevent oxygen ions escaping into the oral environment instead of penetrating into the dentinal tubules). This procedure was repeated every alternate day for a period of three weeks.


After three weeks, the patient professed himself satisfied with the amount of tooth lightening achieved. In the fourth step, therefore, the pulp chamber and apical third of the root canal was restored with light cured resin of appropriate shade.


The patient has since reported by telephone that the tooth has given no trouble and that the colour remains completely satisfactory.


Here is the photographic evidence, because seeing is believing: 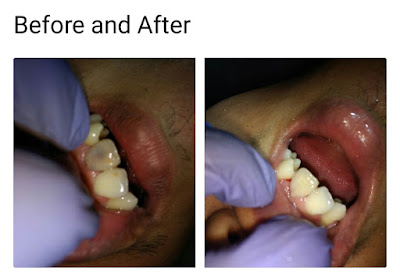 It’s to be noted, of course, that this is not a suggestion to endodontically treat a vital tooth in order to perform an internal bleach on it. That’s all kinds of malpractice, and we don’t do malpractice.