With additional reporting by Peppa Chamatthu

Researchers at the Department of Parasitology, Hops Johnkins Medical Institute, Washington DC, today announced that they had found a major new parasite of human nervous systems.

The creature is the larva of a microscopic wasp, the smallest ever discovered, smaller than some single celled organisms. It has yet to be issued a formal biological name, but the Hops Johnkins Parasitology Department has shortlisted one for consideration.

“The animal is truly remarkable,” the head of the Department of Parasitology, Dr Hector Oaks, told Rueters over the telephone. “Not only is it so small, but its mode of infection is more like a virus than an animal.”

The parasite, Dr Oaks said, is, like other wasps and bees, a member of the order Hymenoptera of Class Insecta, Phylum Arthropoda, the group that includes butterflies and cockroaches, crabs and lobsters, spiders and millipedes. It is the larva of the adult, which itself is so tiny as to be invisible to the naked eye.

“The adult wasp,” Dr Oaks said, “has evolved drastically away from the original form but only in size; it can still handily be recognised for what it is under the microscope. It is, however, the larva that is parasitic. This larva, which is white, is sharply curved except for its tail end, so that it closely resembles a sickle in shape. It is so tiny that it can enter the body of the nerve cells, the neurons, and gestate inside them before moving to other cells. 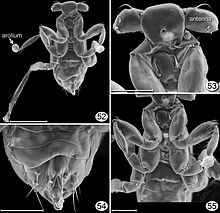 “This animal,” Dr Oaks continued, “has developed parasitic tactics hitherto unknown among other multicellular organisms. The wasp lays its eggs on the surface of a person’s skin. The larva hatches on the skin, and crawls down the duct of a sweat gland until it reaches the inner skin layer, the dermis. There it bores its way out of the sweat gland and crawls around until it finds a neuron, which, of course, is not difficult since the skin is richly supplied with nerve endings. It bores its way into the neuron with its sharp sickle end, and there, inside the cell, it settles down to feed and lay eggs.”

Dr Oaks went on to say that the wasp larva is the only multicellular organism known in which the juvenile form also lays eggs. “It is one of the most remarkable evolutionary adaptations ever seen,” he said. “The larva is born pregnant, and is in fact little more than a bag of eggs. Once it settles down in a neuron, it absorbs nutrition from the cell cytoplasm, and swells up until it bursts open, releasing the eggs. These eggs resemble tiny blue rods with a blob at the end, so that they look rather like a hammer. Each hatches within hours, releasing more larvae, known as Stage II larvae. These Stage II larvae are externally identical to the first, or Stage I, larva, but are of course even smaller. They burrow out of the neuron and move along the body of the nerve, absorbing nutrients as they travel, until, eventually, they reach the brain.

“Once they arrive at the brain, each larva begins to secrete chemicals called neurotransmitters. Neurotransmitters, of course, are naturally produced by the human brain, but the parasitic wasp produces mimics which override the genuine neurotransmitters and significantly affect the behaviour of the host. Parasitic wasps are well known for their ability to convert their hosts into “zombies” which obey the commands of the parasites, but this is the first instance where such an action has been seen in a human being.

“The effect in a human is to drive the afflicted person to seek out others, both affected and unaffected, and to congregate with them in large numbers. Meanwhile, some of the larvae, but not all, crawl out of the brain and back down the nerves until they reach the closest skin, usually that of the face. They then burrow out of the nerve endings and wander around the dermis until they find a sweat gland. Each larva that has survived up to this point immediately curls up and secretes a capsule around itself, which has five points, which under the microscope resembles a star and is dark red in colour. Inside that capsule the larva pupates and emerges as a new adult wasp, which crawls up the sweat gland duct until it reaches the surface of the skin. There it waits, secreting chemicals known as pheromones, which attract wasps of the opposite sex. After mating on the skin, the males, which have no wings or functional mouth parts, die; the females, which are now pregnant, fly off to find new hosts on whose skin to lay eggs and begin the cycle over again.

“Meanwhile, the larvae that have remained in the brain continue to produce neurotransmitters that modify the host’s behaviour in drastic ways. First, as already stated, the parasite compels the infected person to congregate with other people, both infected and otherwise; the sufferer will, in fact, be driven to organise such meetings, by the internet if necessary. This means that the pregnant female wasp has more potential hosts to infect, while the male has the opportunity to mate with females from other hosts and avoid the risks of inbreeding. Secondly, it drastically changes, for reasons so far unknown, not just the behaviour but the political beliefs of the affected person.

“And in what way does it do this? You only have to look at the shapes of the various stages of the larval parasite. While the adult female looks like a very, very tiny wasp, with wings like tendrils, and the male similar but with no wings at all, the larva looks, first, like a white sickle. Then it produces eggs that resemble tiny blue hammers. And in its final stage, the pupa, it looks like a dark red star.

“Is that not enough? The larva in its various forms looks like a white sickle, a blue hammer, and a red star. Clearly there is only one way it can affect the political beliefs of those it infects!

“Yes,” Dr Oaks concluded. “We have confirmed that this parasitic wasp turns its victims into Russian bots, trolls, agents, and zombies. And we therefore suggest that it can only have one name appropriate to it – Moscowaspus vladimirputinii - after the evil Russian dictator, who must in some way be responsible. And we will recommend to the Pentagon that the United States must start World War Three at once!"