Some days ago I faced an interesting, and somewhat distressing, realisation.

I was looking for media – movies, novels, graphic novels, anything at all – from the Iraqi perspective. And I found nothing. Zero. Nothing at all.

The invasion of Iraq must rank as the single greatest war crime of the entire post-Second World War era. It was an incredibly cynical, evil aggression by the Imperialist States of Amerikastan and its vassals on a totally defenceless and blameless country on the other side of the world. It was worse than Vietnam or Korea, which at least had the excuse of “great power politics”. Iraq was simply Amerikastani bullying, an attempt to prove might was right, and the first step to rolling across all of Asia, which was to become a source of raw materials and labour for, and a captive market for the products of, the Amerikastani Empire.

Only, of course, it did not turn out that way.

It did not turn out that way because of one thing, and that was the ordinary Iraqi human, and his bloody-minded determination not to give up.

If there is one person I could call the Human of the 21st Century, it is the ordinary Iraqi resistance fighter. With his government overthrown, his country occupied and in ruins, barely armed, hardly trained, with little or no leadership, faced with the most overarmed, overhyped, destructive military the world has ever seen, knowing that he faced nothing but torture or death, he fought the Amerikastani Empire to a standstill, and then forced it into defeat. But for him, after Iraq, Iran would have been invaded, and then the triumphant Amerikastani Empire would have marched on Syria. And then North Korea would have been the next country to be attacked, before Pyongyang could acquire the nuclear arsenal that it now has to protect itself. And once those had been colonised, China and Russia would have been boxed in, and Amerikastan would have been in a position to demand they surrender or be annihilated.

Armed with light mortars, RPG 7 rocket launchers, and AK series rifles dating back to the Iran Iraq war, with cheap improvised landmines and booby traps, hunted by planes and drones overhead, threatened by traitors and collaborators in his own cities, faced with the possibility that his wife or sweetheart, mother or children, would be arrested, maimed, raped, or murdered by sadistic occupation troops, he fought on. His blood and courage against their steel and electronics and concrete walls, their money and propaganda services.

The Amerikastani invader had it all planned out. Iraq was to be colonised. It was to be demilitarised, its army reduced to a light border protection force. Its economy was to be handed over to Wall Street. Even its black-white-red-green flag was to be replaced with one in blue and white, deliberately designed to be similar to that of the illegitimate zionazi pseudostate in Occupied Palestine. The invader was to permanently garrison Iraq, its tanks crushing millennia-old temples to dust under their tracks, its occupation troops guaranteed immunity from Iraqi law no matter what crimes they might commit. And all this was to be paid for by the Iraqis themselves.

It seemed hardly an equal match.

It was not an equal match. In one of the most remarkable feats of arms ever, in the teeth of ridicule about being a “dead ender” or a “terrorist”, or, most ironically, an “anti-Iraq force”, he won.

And I wanted his story.

I did not find it.

Oh, I found films. I found reviews of novels. I found graphic novels aplenty. There was only one problem with all of them.

Not one of them was from the Iraqi perspective. All, without exception, existed to hammer home one single, endlessly repeated message:

Iraq was an American Tragedy. The Iraqis, such as there were any, existed only for one single purpose: to serve as the background for the American Hero/ine’s life. If they had any kind of major role (as in the graphic novel Sheriff Of Babylon), they were on the “good” side – collaborators and stooges of the Amerikastani occupation. Any Iraqi who fought that occupation was obviously evil. There was no reason to ask why they were evil – they so obviously were that there was no need to prove it.

Obviously, this was the polar opposite of what I was looking for. This was a cultural as well as a literal imperialism, which denied the victimised the right to their own tragedy.

It was at that point that I was given a link to David Rovic’s song Fallujah. One listen and I was in love with it for life.

Here it is, and before you go further, you should listen to it.

As I said, I fell in love with this song. One listen and I knew immediately that this was what I’d been looking for, and that I had to provide visual images to go with it.

My first idea was to draw cartoons to go with the song, but that was not enough. A few seconds’ more thought and I knew what I had to do.

I would paint scenes from the song. And all at once I knew exactly what I would paint, and how.

Before I post the paintings themselves, let me explain something about my self-imposed rules for painting, which are totally different from my rules for cartooning.

In my cartoons, I draw first in pencil, with reference photos, keeping in mind such things as perspective and a semi-realistic style. I use pencil, rubber, then ink, rulers, and finally software to correct, enhance, colour, and anything else I can think of. In paintings, I do nothing like that.

My rules for painting are as follows:

First: Go for mood, not realism. Mood and emotion are what I’m looking for, not the angle of a building or the relative size of a hand.

Second: Do not use any kind of pencil outline or other aid. Paint directly on whatever you are using (in this case, paper) with whatever medium you choose (in my case these days, acrylics). Your only instrument is the brush. Any corrections you need to make will be achieved by painting over, not by erasure or digital manipulation.

Third: The only kind of software manipulation permissible is to crop out ragged margins of paper. That is all.

Yes, these rules make things a lot more difficult, but they also impose a discipline that prevents me from wandering off into frivolities like irrelevant background buildings or the details of vehicles, foot positions, and so on, which is something I spend a lot of time on in cartoons. I stick to my main point, which is transmitting emotions. Whether I am painting a nude or a war scene makes no difference.

Also, it’s a good excuse, because I am not really a very good painter. I find painting intellectually satisfying, emotionally relaxing, and validating my creative instincts, but I am not going to fool myself: I am a pretty bad painter.

At this point that does not matter at all.

So, before we get to the actual paintings, they are all painted on plain white children’s art paper with acrylic paint. Instruments used: cotton swabs and paintbrushes. Copyright B Purkayastha 2018, naturally.

Before each image, I will write the portion of the lyrics of David Rovics’ Fallujah they represent (the images are not necessarily from Fallujah; the first two are of Baghdad). 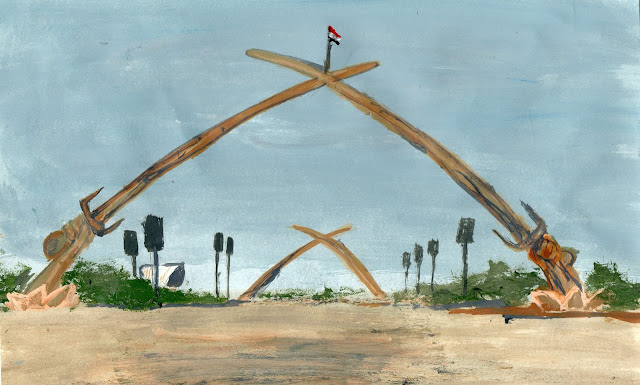 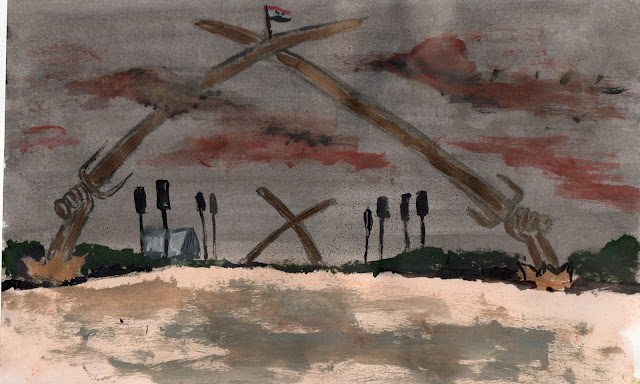 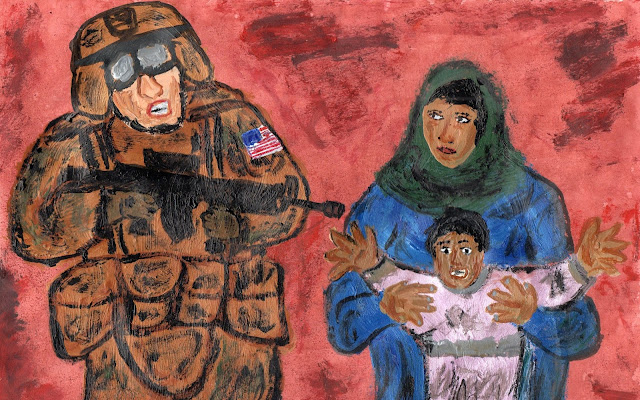 When you torture my brother at gunpoint On his head a canvas sack All I can say to you, soldier Is you'd best watch your back 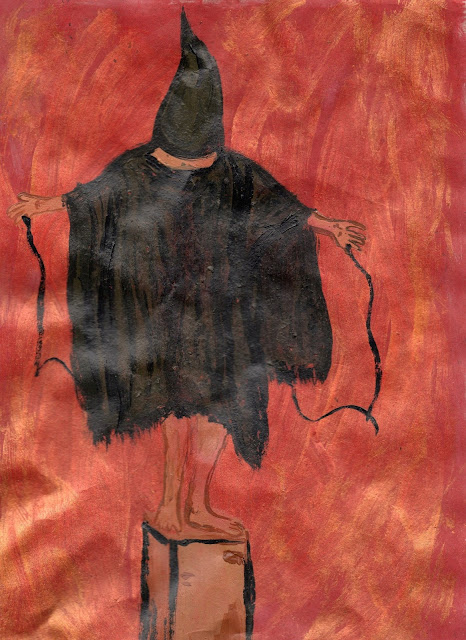 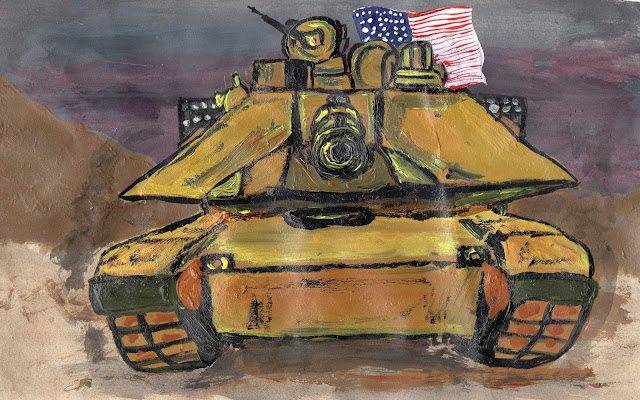 When you have gunned down my child in Fallujah You needn't wonder why I look at you through the blades of your 'copter and say... 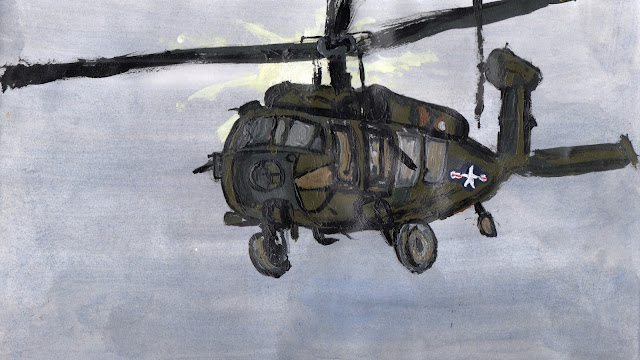 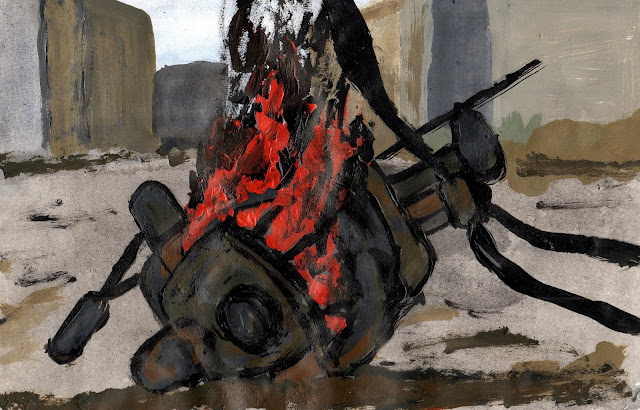 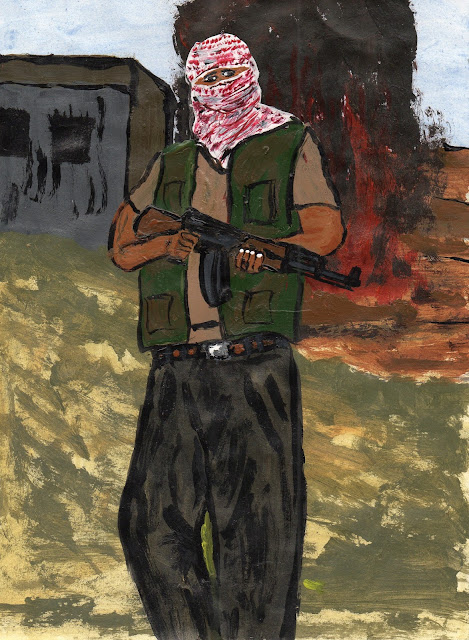 All thanks are, of course, owed to David Rovics, not me.

This is what I wrote elsewhere:

“We’ll kill you if you raise your head,” these foreign ‘liberators’ said
“We’ll raise a firestorm if you dare strike a spark.
The smoke that’s carried on the breeze from the Tigris to the Euphrates


Will signal the final destruction of the cities of Iraq.”

And resistance was their answer. 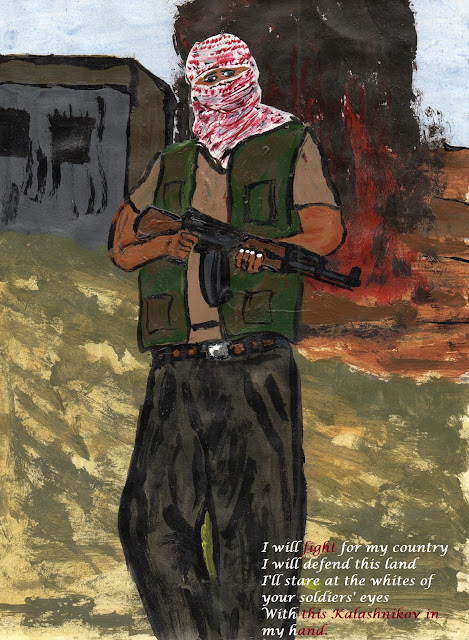 Every night she waited in the cave, waiting for the Cyclops to come and get her.

She could hear him stamping around the outside of the cave, making the floor shake with his footsteps, the walls vibrating with his weight. She could smell him, too, the mixture of anger and alcohol and frustration and despair. She had a name for that smell.

She called it gunpowder. It only needed a spark to explode.

Her cave was small and dark and lonely, and every day it grew smaller and lonelier and darker still. The smaller it was, the safer it was, she thought. There was always a chance that the Cyclops would not notice it.

Though, of course, he would. Each night, she knew that this was the night he would.

Every night the Cyclops stamped around, making things creak and jostle, and then he would make his way heavily over to the bed, and she waited, knowing that on his way to the bed he would turn aside and come to her, that he would come and get her tonight. Then he would strip her, first of her clothes, then of her skin, and then of her flesh and bone, all while she screamed, knowing what was happening to her, but nobody else would hear. Every night she knew that tonight it would happen. Surely it would happen tonight.

But he never did.

And every night that he did not punish her merely increased the guilt she bore, and, therefore, the measure of her punishment.

Crouching in her corner of the cave, she trembles, waiting. Tonight he did not come. Tomorrow, surely, he will come. Her heart measures her fear with every beat.

Tomorrow night, tonight. But she is afraid that he never will. That this is her punishment.

And, sometimes, worst of all, she wonders if he is real.

She wants to beg him to come.