I keep hearing terrorist fanboys whining that in Idlib "only 0.5% of the population are terrorists", and that "according to the UN there are three million people" there.

All right. Let's ignore the fact that in Aleppo and in Daraa and in East Ghouta the actual number of civilians present turned out to be a tiny fraction of the so called UN estimates.

Let's ignore America's own statements of last year that al Qaeda controls every facet of life in Idlib. Let's give America amnesia about that.

Let's also accept for the sake of argument that groups like Harakat Nour ad Din al Zenki (which chopped off a sick 12 year old Palestinian boy's head in Aleppo), Ahrar al Sham (which has repeatedly allied with ISIS) and the other Islamist Muslim Brotherhood inspired groups in Idlib aren't "terrorists", but moderate democratic rebels. In fact, let's accept that they're civilians and deserving of the same protection as civilians. Let's accept, then, that 99.5% of the 3 million people present in Idlib are civilians, with only the members of the two al Qaeda fronts (Hayyat Tahrir al Sham and Hurras ad Deen) being terrorists.

So, where does that get us?

0.5% of 3 million people are individuals who even the terrorist fanboys admit to be terrorists.

How many al Qaeda did America invade Afghanistan to dislodge, again? 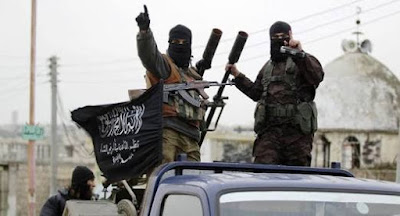