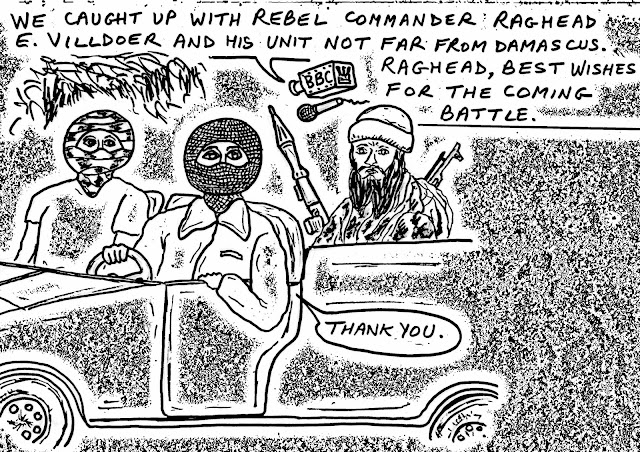 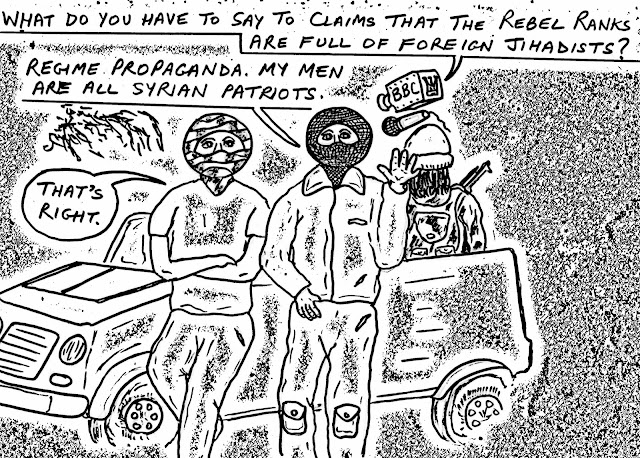 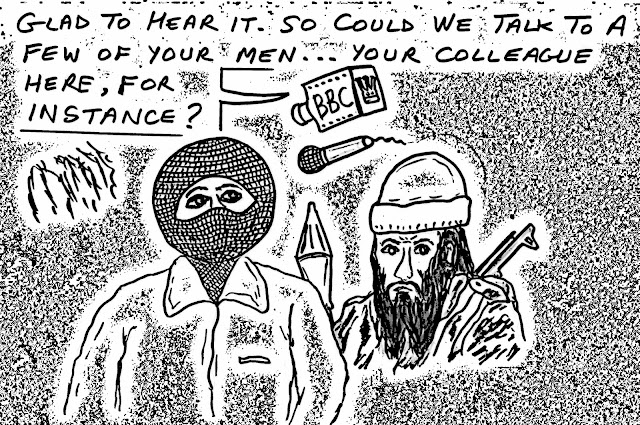 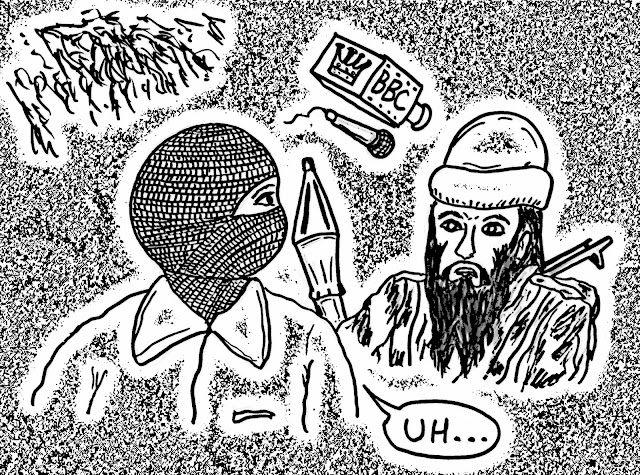 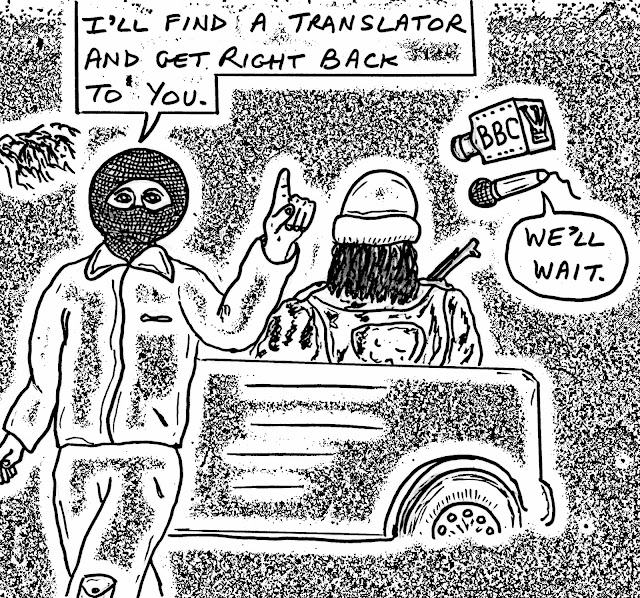 This is the first time I've done a five-panel Raghead strip. I could have done it in four, but in my opinion it works better with the extra panel. I don't intend to make a habit of it though.

Digging as he is ordered
Digging the grave of his dreams.

Perhaps he raises his eyes to yours.

Or the old rusted spade he uses
To dig the grave.

You did not care.

But perhaps this time
The grave he digs

Will be your own.

Back when I was a kid, nobody had ever heard of sliced bread.

This wasn’t that long ago, really – the mid-seventies - not exactly the medieval era. But the only bread in the shops back then comprised heavy unsliced loaves which, when you cut it with a knife, stubbornly refused to cleave into thin or evenly-sized pieces until it got slightly stale and hardened a bit.

And, you know what? That bread was good. It was aromatic and tasty, and as long as it hadn’t been cut it stayed fairly fresh inside its crust. And if you finished it off fairly quickly you didn’t give it a chance to get stale. But everyone was so used to it that they didn’t know that they had it good. Most of them even ate the crust, though I don’t know how many enjoyed it. I did – but with that bread, if you tried to cut the crust away, you lost a deal of bread with it, and the thrifty middle-class soul of the time rebelled at the very idea.

Then, sometime in the late seventies, sliced bread appeared on the market and took it by storm. Suddenly, those lumpy loaves of unsliced bread looked provincial and uncouth. If you were “modern” (or, as most people pronounced it, “mordern”) – and one of the brands was even called Modern Bread – you spread your jam or butter on paper-thin slices of white bread. Suddenly, it was fashionable for parents to cut the crust away saying their Bunty or Pinky or whatever the kid’s name was didn’t eat it. And before you knew it, nobody wanted to be seen eating the old thick bread slices anymore.

And you know what? Those slices, thin as paper, tasted like paper as well. Half the time it would already be stale when you took it out of the packet and once in a while you’d find mould growing here and there in little patches. Of course, if that happened, whoever it was – the mom, usually – would cut away the patch of mould and use up the rest of it. (And, no, it wasn’t confined to bread – back then, Bunglee middle class people even had culinary recipes for rotting fish. But I digress.)

The next thing you knew, then, the unsliced bread had virtually vanished from the market. For years thereafter, it was almost impossible to find a loaf. Meanwhile, having driven the old king out, the sliced bread manufacturers began fighting each other for the market share. So you began to find fads suddenly springing up, like cylindrical bread in the mid-nineties, which grabbed everyone’s attention for a few months and then quickly faded away. All of these innovations were short-lived, and all of them soon gave way to the same old tasteless stuff. I suppose it wasn’t economical to keep using them.

I need to mention something: all this bread, sliced and un-, was invariably white.  Brown bread was, at least in this part of the country, almost unheard of, and when it could be found it was far more expensive than the equivalent white. I don’t know the reason; maybe they began making bread with white flour and only came to know of the existence of brown bread at a later date. Even today, it’s not easy to find brown bread and it’s never fresh, unlike the white.

Personally – if you haven’t got it yet – I love unsliced bread, and I am one of those who were never into the sliced stuff after the first few bites. These days, it’s evident that I’m not alone. In fact I’m so far from alone that there’s a market catering to the likes of me. A few shops around town have begun carrying unsliced bread again. These are invariably outlets for local bakeries, not grocers who get their stocks from wholesalers, so the bread isn’t branded or wrapped in fancy packaging; and it arrives on the shelves straight from the ovens. 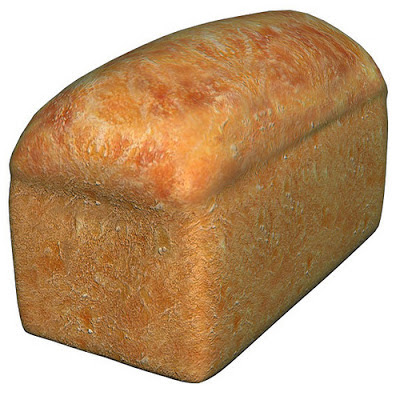 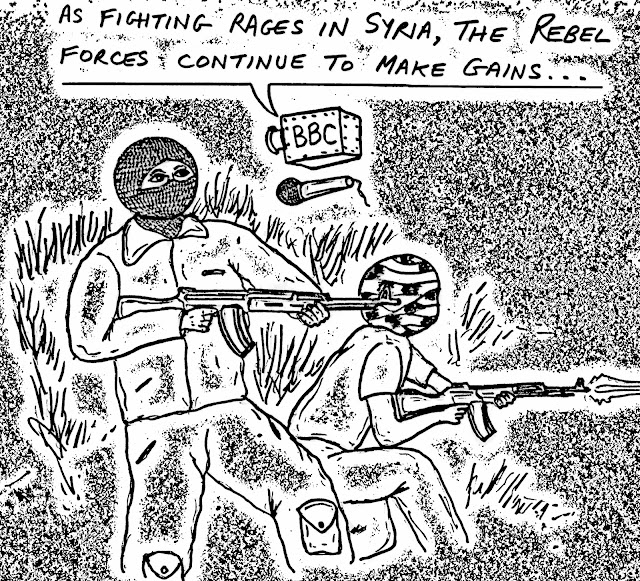 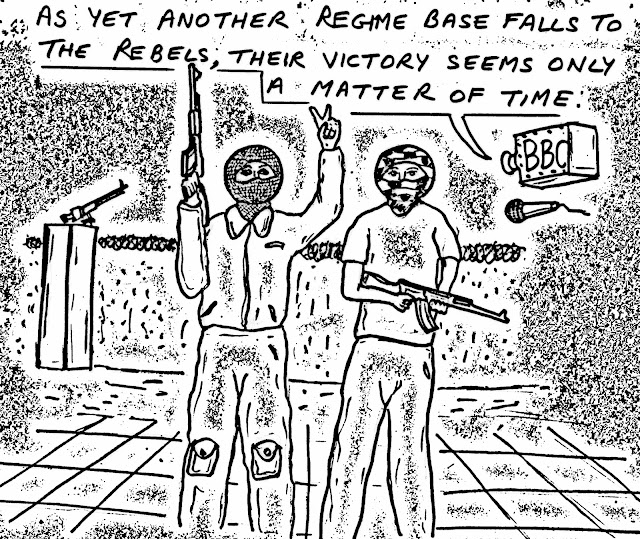 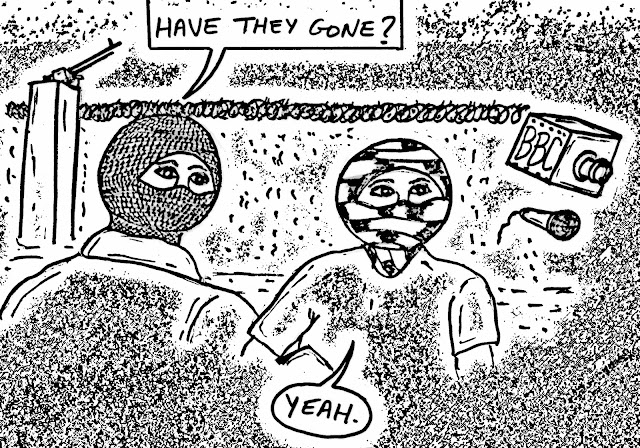 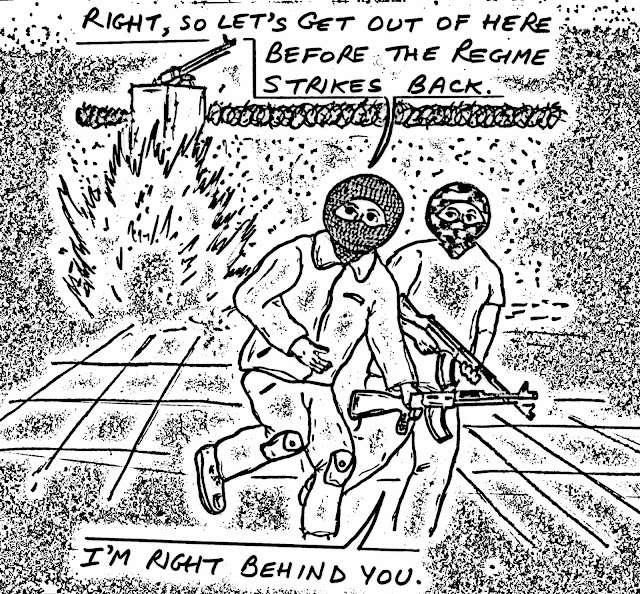