When you see the Kashmiri
Hate him.

For decades he has been
A stain on the nation

His insistence that he, too
Is human, and has desires
This must not be allowed to be.

Tie him to the bonnet of your car
To use as a human shield
Teach him a lesson.
Blind him
With pellet guns
Shoot him
And burn his house to ashes

The way the British treated us all
Him and her,
You and me.

He deserves it, even though
It is all the fault of Pakistan
Simultaneously.

When you see the Kashmiri
Spurn her.

She deserves it, because
Her husband, her brother
Her mother, her sister, her father
Breathe the pure air of your
Hindu nation,
And her children grow up

To be the Other that must not be.

Even though it’s all the fault of Pakistan 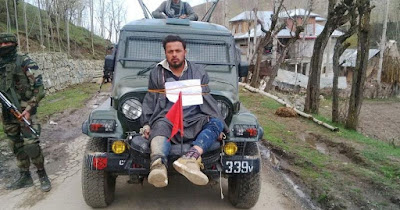 Review Of An Article On Kashmir

Instead, it doubled down on its treatment of Kashmir as a de facto colony with results that are obvious for all to see.

In other words, this article is for readers who don't know the history of Kashmir. If you do, you won't believe more than one word of five in it.