Shot At Dawn: The Case Of Mata Hari

One morning, over a hundred years ago, a woman was shot by firing squad on the outskirts of Paris.

She was called a spy, a whore, the killer of fifty thousand French children. Movies have been made about her. Books have been written about her. There's at least one graphic novel on her.

Her name is Mata Hari.

This is her story.

The term Mata Hari has almost become synonymous with "woman spy", but the real story is anything but a tale of espionage. It's a story of French incompetence, evil, and judicial murder.

Mata Hari was a Dutch woman called Margrethe Zelle who was born in 1876 to a relatively wealthy family. Her father however was in debt and went bankrupt in Margrethe's childhood, and later abandoned her mother and her to run off with another woman. While Margrethe was still in her mid teens and at school her mother died, leaving her without means and unable to earn a living. So she answered an advertisement for a wife posted by a Dutch officer, one MacLeod (I assume of Scottish descent) who was on leave from Dutch-enslaved Indonesia. He was twice her age but they immediately got married within a week because he was going back to Indonesia. On the voyage by ship there he gave her syphilis. Later she had two children, one boy and a girl, both born with congenital syphilis. The boy was accidentally murdered by a colonial regime doctor trying to cure his syphilis. The girl barely survived. By this time Margrethe and MacLeod openly despised each other. He started having multiple affairs, she retaliated in turn, and they finally moved back to Amsterdam and divorced in 1904. Though the courts gave Margrethe custody of her daughter, she had no money and the girl was actually brought up by her ex-husband.

In 1905, penniless and with no prospect of a job, Margrethe decided to reinvent herself. She changed her name to Mata Hari (which in Hindi would mean Mother Krishna, or Mother of God, but she didn't take it from Hindi. In Malay and Bahasa Indonesia Mata Hari means "eye of the morning", that is, the dawn or rising sun.) She claimed to be, at various times, Indian or Malay, and that she had been trained in sacred temple dances in the East.

Mata Hari was, despite her background, extremely intelligent, fluently multilingual (she could speak English, French, Dutch, Italian, Spanish, Malay and "probably" German), and she was a good if not exceptional dancer. She soon became extremely famous for her dancing, mostly because it was a thinly disguised striptease in which she would take off everything except her bra (because she was self conscious of her small breasts). At that time striptease would have landed her in jail for obscenity, but she was very careful to get round that by announcing before every performance that she was going to perform sacred temple dances, so it was a religious affair. She became famous throughout Europe; from Paris (where she lived) to Germany and Russia, she performed everywhere and earned enormous amounts both in money and gifts of jewellery from her lovers and admirers. This lasted all the way through the 1910s until the start of WWI.

Here is an actual photo of Mata Hari dancing: 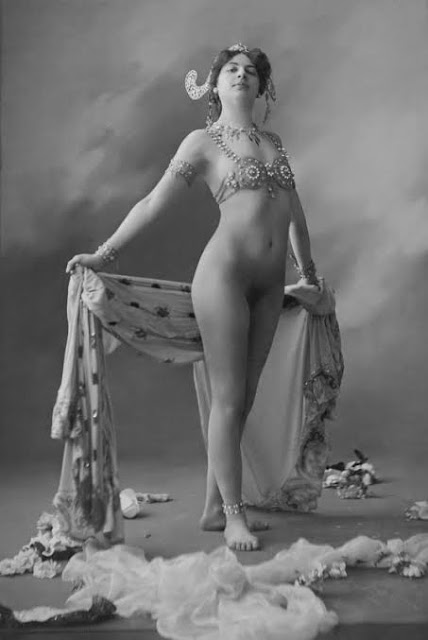 When WWI started Mata Hari was still in Paris. As a Dutch citizen, since the Netherlands was neutral, she could actually travel to both France and Germany through the Netherlands, and she continued performing. But by this time she was growing older and other, younger women had begun copying her and dancing naked, so instead of dancing her income mostly came from being a high class courtesan for very rich men. Then the Germans seized the furs and jewellery that she had in Germany for "wartime requirements". Mata Hari never forgave them for this. And, as we'll see, like her fluency in languages, this was to come to be used against her later.

The French soon became suspicious of this Dutch woman who was intelligent, fluently multilingual, had rich and powerful lovers, and being a citizen of a neutral country could go to Germany if she wished. They also desperately needed a scapegoat by 1916 because they were losing battle after battle because of the incompetence of their own generals. The French soldiers no longer wanted to fight. On at least one occasion three soldiers were even picked out at random and shot by firing squad to "encourage" the others to fight; this was later to be made into a famous film, "Paths Of Glory". So the French needed someone to blame and Mata Hari seemed a good choice. Her extravagant lifestyle when France was at war was already making her notorious in any case.

While on a journey to Netherlands via Spain, Mata Hari's ship halted at Brutain and she was interrogated and searched as a "possible spy"; one of the reasons recorded as being against her was that she could speak so many languages. Then back in Paris she was again followed, and then the French intelligence agency summoned her, accused her of being a spy, and when she denied it, made her an offer that they would pay her expenses if she would actually spy on the Germans for them. They said she could go back to the Netherlands via Spain and England (couldn't go directly because Belgium was half under German occupation and direct routes were cut). Actually the French had absolutely no intention of using her as a spy; it was an entrapment operation.

Mata Hari, accordingly, went to Spain and took ship for the Netherlands. When it stopped in Brutain the Brutish took her off the ship, took her to London, interrogated her (in all the languages she could speak), and accused her of being a spy. She protested that she was on a mission from French intelligence. The Brutish contacted the French, and the very same officer, one Major something (I forget his name and I'm not interested in looking up the nomenclature of such a maggot, let's call him Major L) said he had never heard of her. The Brutish deported her back to Spain. There she was approached by a German diplomat, who offered her money to spy for Germany. She took the money but never did any spying. The reason she took the money was because she considered it compensation for her things that were seized by Germany when the war broke out. She then, because there was absolutely nothing she could do in Spain and because she loved Paris, went back to France. At this time she was forty years old.

In Paris Mata Hari soon found that the Major L who had employed her now acted as though she did not exist. He didn't pay her, he didn't answer her letters; his agents however kept following her. She began running out of money and started moving from one hotel to a cheaper one and a cheaper one still (but still very luxurious, such as from a 5 star to a 4 and then a 3). At the same time she met and fell in love with a Russian officer, one Captain Maslov, who was deputed to the French army. Maslov loved her too and invited her to his frontline post. She had to pretend that she had health problems and needed to visit a spa in the area in order to get a permit to visit him and when she did she found that he had been badly injured in a gas attack and was in danger of losing his eyesight, yet she proposed marriage to him and vowed to remain with him throughout life.

This visit to the frontline would later become another "proof" in the case against Mata Hari.

Meanwhile Major L claimed (this was in February 1917, when the French army was beginning to fall apart and entire divisions were mutinying) that his signal station on top of the Eiffel Tower had intercepted messages from the German diplomat in Spain claiming that Mata Hari was a German agent, H-21. It's extremely likely that the messages were totally fictional because the original messages were never found, just the alleged French translation. There is a source that claimed that the German diplomat considered her a liability and may have sent a message in a code he knew the French had broken in order to get rid of her, but in that case the original messages should have survived. Based on the message, in any case, Mata Hari was arrested in her hotel in April 1917, accused of being a spy, and confined in a prison for prostitutes. As a punishment, she was regularly moved into filthier and filthier, more vermin infested, cells, while the case against her was fabricated in a military court. The chief of the tribunal was a French officer (Bouchardon, if I remember correctly, but let's call him B) who hated sexually liberated women and who in any case was also determined to find a scapegoat for France's military defeats. Mata Hari was only permitted a civilian solicitor who was a former lover and who knew nothing about military law; he wasn't even allowed to cross examine witnesses. Letters from Maslov were deliberately withheld from Mata Hari and when her solicitor wanted to call him as a defence witness he wasn't permitted to. The Dutch embassy ignored the letters she wrote protesting her innocence. The French regime media was also whipped up to a frenzy, claiming that Mata Hari was responsible for the deaths of "50000 French children" (soldiers who were children of French parents; this was a brilliant propaganda move, one must admit). No evidence was ever presented for any of this, of course; one of the tribunal members would later admit there wasn't enough evidence against her to "flog a cat". In July she was sentenced to be shot by firing squad, and was executed at dawn one day in October 1917 at the age of 41: she was shot by a firing squad of Algerian troops in red fez caps in service of the French. She refused a blindfold and refused to be tied to a stake to be shot, and one of the firing squad later said "the lady knew how to die".

After her death her body was sent to a medical college to be dissected because nobody would claim it.

Ironically, a few days after her murder, the Major L who had framed her as a German spy was arrested....on suspicion of being a German spy.

In 1930 the German government officially announced that Mata Hari had never, at any time, been a German spy.

To this day the French regime has made no such announcement.
Posted by Bill the Butcher at 9:19:00 pm No comments: