As we all know, the Imperialist States of Amerikastan can never lose.

It didn’t lose in Vietnam, for example, or in Somalia, or Iraq, come to that.

What? You thought the Imperialist States lost in Vietnam and Iraq and Somalia? Obviously you didn’t watch any of the many, many Hollywood films dedicated to proving the opposite for Vietnam, or Black Hawk Down for Somalia, or American Sniper for Iraq, and that’s just the list I can be bothered to dig up.

Anyway, to get to ye olde pointe: Amerikastan can never, ever lose. I mean, Hollywood says so! Who are you going to believe, Hollywood or reality?

So: Since Amerikastan cannot have lost in Afghanistan yesterday, it is not possible, despite all evidence to the contrary, I decided to help Hollywood out and write a script for it. I mean, I am literally creating history here!

So, coming up: the new Hollywood blockbuster on Afghanistan, Bloodhawk Down.

The heartbreakingly beautiful mountains of the Hindu Kush (the Pamir Knot will do nicely as a substitute, thank you, do you think the target audience for this kind of thing can differentiate between Afghanistan and Tajikistan anyway?). The purple shadows of evening lie deep in valleys.

Enter the shadow of a helicopter, along with the noise of its engine. Pan up to the cockpit, where we have our GRIM-FACED HANDSOME HERO, who is the pilot.

This is Major Bloodhawk, USAF. The camera moves up his body, hesitating briefly on his uniformed chest, which has his name in clearly visible BLOCK LETTERS, as well as the requisite stars and stripes badge.

Major Bloodhawk is, of course, played by Tom Cruise. It is always Tom Cruise as the aging, handsome, instantly relatable hero. Of course it’s Tom Cruise. Who else could it be, Arnold Schwarzenegger? Give me a break.

FLASHBACK to Major Bloodhawk’s many years in Afghanistan, starting with his service as a young gunship pilot back in the glory days of the invasion in the mid 2000s, then moving on to training Afghans to fly helicopters so they can do some gunshipping of their own (insert manly tears when one of his pupils is killed in a crash). He has friends among Afghans, including a brave translator who saved his life during a Taliban ambush. This translator’s name is Quislinguddin, and he has stayed in touch with Major Bloodhawk ever since.

Back home, naturally, Major Bloodhawk has a lovely and loving wife, and the requisite two children, male and female. This wife’s name is immaterial, call her Laura if you want, but she’ll be, naturally, played by Angelina Jolie. She was in Kabul, too, of course teaching Afghan women to read and write, but in recent days she’s gone back home. This is an opportunity to show her lovely, palatial home in a leafy suburb somewhere in California, with the compulsory swimming pool in the backyard, complete with a golden retriever who goes swimming with brat and bratess.

So both Bloodhawk and Laura are – are you getting this? You are? Good – absolutely genuine heroes, as everyone can see. And the Afghans love them! (Insert shots of profoundly grateful Afghans, begging him to bomb their villages some more and her to teach them some more to read and write.)

But times have changed, and it’s 2021, and the Taliban are threatening Kabul. (Gasp! Who could ever have seen that coming?) Major Bloodhawk is past his glory days as an Apache gunship pilot. He now flies a Chinook transport, and he’s been tasked to stay ready to evacuate Americans from the rooftop of the embassy in Kabul, exactly as President Bidet had sworn would never happen.

You’re still with me, right?

Bloodhawk has a trusty sidekick, who mans a heavy machine gun set in the Chinook’s door. (Never mind whether Chinooks have door gunners, door gunners and helicopters go together like napalm and Vietnamese villages, this has been holy writ since the first Vietnam movie came out, dammit.) I can’t be bothered to come up with a name for him, but he is played by the guy from Jurassic World.

So! The evil, vengeful, misogynistic, bearded, turbaned Taliban are battering at the gates of Kabul, when Major Bloodhawk gets a call on his mobile phone! Who can it be? Who??

His old mate Quislinguddin, that’s who.

Quislinguddin, and I don’t care who plays him as long as it’s a smallish round-faced man with a moustache and a pakol cap, is calling from a village near Kandahar. This village is ruled over by an Evil Taliban Warlord. (Maybe played by Danny Trejo in a beard and black turban? I think it should be Danny Trejo in a beard and black turban.) ETW has his eye on a beautiful young girl in the village, played by anyone, damn it, what does it even matter at this stage. ETW has decided to celebrate the impending Taliban victory by kidnapping the BYG, and intends to marry her as soon as Kabul falls.

“Bloodhawk,” the translator says, “the evil Talib has kept her confined within his dastardly fortified house in the village, guarded by the evillest Taliban guards in all Kandahar! You must save her!”

Bloodhawk’s orders are to wait and be ready to evacuate the embassy but... (Flashback once again to the moment that Quislinguddin saved him from the Taliban ambush, diving on him and wrestling him to the ground at the risk of his own life.) He calls Laura and explains his dilemma, and in an emotionally charged scene over the phone – he in his helicopter seat, she looking at her (very symbolically empty) bed, a photo of the two of them on the side table, they decide that he must Do The Right Thing.

Tom...I mean Bloodhawk...turns to his door gunner, GFJW. “What do you think, Guy?”

Guy, as anyone who’s watched Jurassic World is aware, is capable of just one expression, so he doesn’t move a facial muscle. “Let’s go get her! Hooah!”

So, without orders, the Chinook clatters into the air and heads off to Kandahar. (Insert more scenic mountains while dramatic swelling music plays, etc.)

Cut to the village, where the ETW has been taunting the BYG with her inevitable fate. Suddenly, from his window, he sees the helicopter clattering over the village roofs. Leaning from the aperture, he shouts at his army of guards to alert them to this threat! Bloodhawk, look out! The enemy knows you’re coming!

It’s Quislinguddin! Running from one spot to another, mobile phone at his ear, he directs Bloodhawk, telling him where the Taliban are! The heroic American helicopter – roundels and USAF legend boldly visible – makes several low passes over the village, GFJW mowing the Taliban guards down with his trusty machine gun, American firepower defeating evil! Then, in a great gust of sand and wind, the Chinook starts descending into the village square.

But what is this?!? The dastardly ETW has taken the opportunity to barricade himself in his evil fortified residence! He knows that Bloodhawk can’t stay long, and he’s determined to wait it out! Whatever will Bloodhawk do?

In the helicopter, Bloodhawk and GFJW exchange glances. “Do it, Major,” the latter says...I mean, grinds out between clenched teeth. “Do it!”

So, in a remarkable action sequence never before committed to cinema history, Bloodhawk flies his helicopter at almost ground level right up to the ETW’s house. His front rotor’s immense blades crash through the wall of the dastardly residence, sending a mass of rubble falling into the dusty street. Then he backs away and begins to swing around for another go.

But, look! Who is this slim, lovely figure who dashes from the broken house? Why, it’s the BYG! She’s free! But only for the moment, for behind her lumbers the form of the ETW! He wants her back! He’s too close to her for GFJW to use his machine gun! She’s almost caught!

And here comes Quislinguddin, armed with a piece of wood from the ETW’s own demolished house! He hits the ETW alongside the turban with the half-plank! ETW’s down for the count!

Bloodhawk, delicately as a feather, lands his helicopter next to Quislinguddin and the BYG. GFJW urgently beckons them aboard, but the girl’s afraid to climb on. Quislinguddin has to push her from behind and GFJW pull her by the arms to get her into the chopper. Finally she’s in, and Quislinguddin begins to clamber aboard himself.

But, wait! The ETW has recovered! Clambering to his feet, his mad eyes glaring, he reaches inside his sleeveless jacket and brings out a (Russian, this was given to him as bounty for killing US soldiers!) Tokarev pistol. Just as the helicopter lifts off, he shoots at it, and the bullet, going through the door, takes Quislinguddin through the chest.

As GFJW pilots the Chinook towards Kabul, Quislinguddin looks up at Bloodhawk kneeling over him on the chopper's floor. “We did rescue her, didn’t we?” he whispers, a heroic trickle of blood seeping photogenically from the corner of his mouth.

“I should never have saved your life,” Quislinguddin says, and grins painfully in the best buddy war movie tradition. “You just keep getting me into trouble.”

“I won’t do it again,” Quislinguddin says, and dies in Bloodhawk’s arms.

Swelling music as Bloodhawk weeps bitter tears over Quislinguddin’s corpse. Then the girl lays a comforting hand on his shoulder. He looks up at her and smiles.

The American-flag-bedecked runways of Kabul Airport appear in the distance. 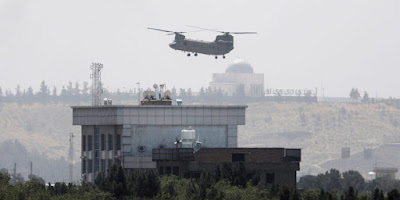