Little Baghdadi Sat In A Wadi

"How dare you try to take my spoils
Baghdadi is my hero too
And I'll gladly ally with this bugger
Before I settle with you.
And if you think I'm alone
Look over there and think again
Those tons of arms from Trump's closet
Didn't just come up through the drain.

"ISIS, Kurds, America, we're together
When it comes to you,
We'll take Raqqa and the oilfields
And we'll keep Kirkuk too."

But the roar came slamming
From the Syrian lion here
And the Iraqi lion shook his mane
Bared fangs and rose up there.

And now Baghdadi and Kurds alike
Will be eaten by the way
Nobody knows, where this story goes
But we're finding out, day by day. 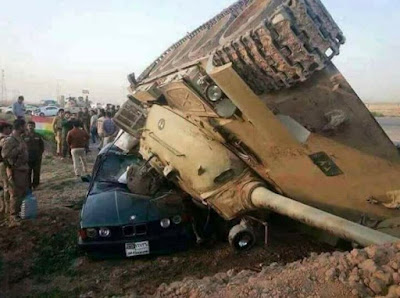 Fast ran the car through the night. The highway was empty, the sky clouded over, devoid of moon and stars. The only light came from the twin headlights, painting the road with a pale wash of yellow – and the tip of the driver’s cigar, glowing red like an inflamed eye.

The driver was in no hurry. He had far to go, but the night was long, and he did not have to be there before morning. He could even have a bath, a shave, a snooze and breakfast before presenting himself to the underboss at his office.

Yes, the police might know that he was coming. The police might track him, and might even try to find some excuse to search him. But they wouldn’t get anything. They never had, and they never would.

Especially not this time. This time he was on the most important mission of his career. By this time tomorrow night, billions would have been made – and he, Robby the Mook, would have earned enough to be a millionaire himself, several times over.

No longer would he be a lowly bagman and gambling runner. By this time tomorrow, Robby the Mook would be among the rich and mighty, the hardships and dangers of his life all behind him.

In his head, buried where no policeman could get to it, were the details of every single bet placed over the past week in the Great Big City – every single bet riding on the results of the Grand Election tomorrow. Robby the Mook, who had a brain cursed by a literal inability to forget figures, had long ago found a way to make it work for him. And not just for him, but for the Organisation.

The Organisation was not ungrateful.

But this time it was more than this. Robby the Mook had placed discreet bets this time, carefully spread out among the Great Big City’s illegal bookies, in many false names – each a small bet in itself, nothing to draw any attention, but together they would pay out a massive sum if he won.

And he would win. Careful work over the years, payments made and contacts sedulously cultivated, had all finally borne fruit. Robby the Mook knew exactly who had been selected to win the Grand Election tomorrow. He even knew exactly by how many votes, within the nearest thousand, the final total would be.

Oh, Robby the Mook would be a rich man indeed.

Puffing at his cheap cigar, contentedly reflecting on the fact that by this time the day after he could afford better smokes and a better car, he roared on through the darkness, and switched on the car radio to listen to some music.

He’d have to keep it quiet for a while, of course. The Organisation would have no mercy if it discovered that he’d known what was about to happen and not tipped it off. But after a few months had passed, he could arrange to disappear, change his name, and turn up with false papers in a South American country. It would not be hard, when he had money. He might even get plastic surgery to change his appearance. He’d always disliked his nose...

But he would not delay in buying a better car and better cigars. And new shoes. He loved new shoes. Black, gleaming, with pointed toes and that leather smell.

His dreams of the future were so absorbing, and so comforting, that he did not notice until it was too late the brilliant light lowering through the clouds above him.

The caab-ship from Glnthorr had passed the orbit of the moon before the captain summoned her second in command to the control tub.

“Senior Lieutenant Vicious Rimmer,” she snorkled, moving her tentacles in the tub’s green and purple liquid. “How was the harvest this time?”

Senior Lieutenant Vicious Rimmer opened his voice flap. “Excellent, Most Honourable Caab-Captain,” he bloggered back at top volume. “We have never had a better one.”

“Really?” Caab-Captain Lindispercy thrashing around her tentacles in confusion. “I thought you’d said that it was shaping up to be a really poor harvest this time.”

“That was true enough, O Honourable Caab-Captain,” Vicious Rimmer blooted.  “The first collections were severely stunted, almost useless. As you may recall, I decided to make one last attempt. And we struck, as the apes on that planet call it, gold.”

“Gold.” Caab-Captain Lindispercy’s left front upper tentacle flicked some of the fluid so high that it splashed on the ceiling. A crawling tiktiki lizard instantly slurped it down before it could dribble back into the tub. “That heavy yellow metal. Oh yes, I remember that these apes like it. So it went off well?”

“Most well, O Delicious and August Mistress Caab-Captain,” Vicious Rimmer gnokked, his voice-flaps distended at full opening. “This last collection was better than all the rest put together. The harvest collection tanks are filled to brimming, and the memoworms and mathafungi are already seeded and growing.”

“Very good.” Caab-Captain Lindispercy smacked her beak appreciatively. “It’s been a long time since we could eat our fill of memoworms and mathafungi. With full tanks we will all get medals and promotion. Set course for home.”

Lying back in the tub, she watched the tiktiki on the ceiling and dreamt of the honours to come.

“Reports of UFO activity have increased over the last few days,” the radio said. “People have reported seeing strange lights in the sky, and some of them have alleged that their vehicles stopped working, after which they remember nothing.

“Scientists have explained away these as mass hallucinations arising from anxiety over the results of tomorrow’s election, which has been stated to be the most significant in a generation. In political news, the candidates...”

Robby the Mook blinked. The car radio blattered meaninglessly. He looked out blankly through the windscreen at the empty highway, and at the steering wheel in front of him. There was the burnt end of a cigar on the dashboard. He looked at it, picked it up, bit it, and threw it away.

He was still sitting there when the police car stopped beside his and a torch shone in through the open window. “You,” a voice said. “Who are you? What are you doing sitting in your car in the middle of the highway? Are you ill, or drunk, or trying to cause an accident?”

Robby the Mook stared at the torch. “Blub?” he inquired.

“I said,” the policeman repeated, his voice rising in exasperation. “Who the hell are you and what are you doing?”

“Glop,” Robby the Mook said. He raised his hand and grabbed at the light, surprised when he couldn’t catch it. “Brok?” he asked. “Brok dok mok?”And then, with an effort: "Who are you? Where am I?" He frowned. "Who am I?"

And it was at that point that the policeman began to scream.