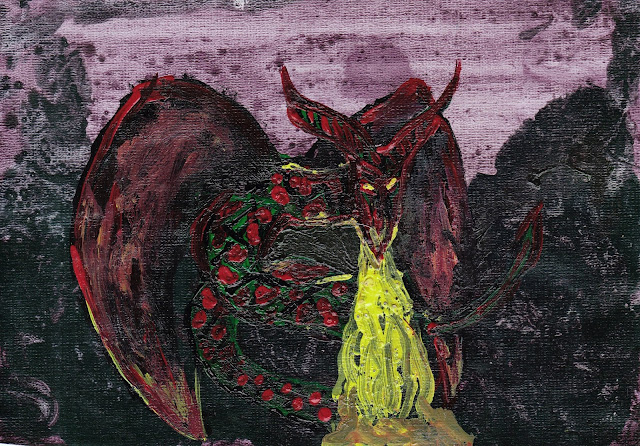 Title: Dragon At DuskMaterial: Acrylic on PaperCopyright B Purkayastha 2016﻿
Posted by Bill the Butcher at 8:41:00 pm 2 comments:

The Prophecy of the Gorks

Long, long ago, in the Land of What-If, there was a Gork named Hala’fet, that is, Who Is Mighty.

As I’m sure you know, Gorks are vicious, utterly malevolent creatures which love nothing more than to kill and eat any human they meet, and not necessarily in that order. You do know that, right? If you’ve listened to the town criers and to the announcers after the gladiatorial fights at the local baronial estate, I don’t see how you could possibly avoid knowing it.

Only, of course, none of that is true.

The Gorks knew quite well that it wasn’t true, but were content to let it go on that way. They didn’t eat humans, but as long as the humans thought they were evil man-eating monsters, they were too scared to push into the lands of the Gorks; and the latter had already seen what happened to those whose lands the humans pushed into.

So they went on with their lives, eating fruit, vegetables, and, if they had meat cravings, only the flesh of creatures which had died of natural causes. It is absolutely not true that they helped the process along with a tap on the head, as has sometimes been alleged. Gorks aren’t hypocrites, whatever else they may be.

Who Is Mighty was the son of G’afa’ghoin, that is, Life Of Abstention, and grew up in her house in the Gork town of Future Hope. You didn’t know Gorks have towns? Of course they have towns – they don’t live in caves. They aren’t savages. They have perfectly normal towns, with streets and houses and temples and theatres, too, only they’re all made of glass. That’s because the Land of What-If is full of volcanoes, and the Gork part of Land of What-If more than all the rest.

So Who is Mighty grew up in Life Of Abstention’s glass house, and from the start he had problems. You see, living in glass houses means that Gorks have no privacy whatsoever. Of course, they could use frosted glass, but they only used that in their bathrooms and screens around their beds. It is a point of honour to the Gorks that their lives are open to public view, and they have nothing to hide.

Who is Mighty, though, had from the start an extremely strongly developed sense of privacy. This is, obviously, a most inconvenient quality for a Gork to have. Even while a child, he’d try to hide himself even while playing with his toys. In a toddler this was perhaps understandable, but when he grew a little older he began covering his food with his arms and turning his back to the street at mealtimes.

This was not only not understandable, it was intolerable.

Finally, Life Of Abstention had to talk sharply to her son. She called him to her room, and ordered him to stand facing the street. To any other Gork, this would be a matter of pride, because to face the street meant showing the world that you had absolutely nothing to hide. But to Who Is Mighty this was the direst punishment.

“The neighbours are complaining,” she said. “They say you’re going unacceptably against tradition and customs, and that they can’t accept this anymore.”

“But, Mum,” Who Is Mighty whined, “I can’t stand the stare of all those eyes. It makes me feel as though I’m a lab specimen. I literally can’t eat unless they can’t see what I’m doing.”

Life Of Abstention tried her best. She cajoled and begged and then, in a fit of desperation, even ordered him to stay in his bedroom until further notice. It was only later that she realised that this wasn’t a punishment where he was concerned, it was a reward.

So, being unable to think of anything else, she finally dragged him – literally, by the arm, because he didn’t want to go – to the High Temple, which is, of course, made of the most transparent, clearest glass in all of the Land of What-If. There, she demanded an audience with the Top Priest.

The Top Priest came tottering along on his glass shoes, moving most carefully so as not to shatter his glass-fibre robes. “What is it?” he demanded peevishly. “I can’t be at everyone’s beck and call.”

Life of Abstention explained, expecting the Top Priest to threaten her son with the wrath of all the gods unless he corrected his ways. Obviously, nobody would want to be the target of the wrath of the gods. To her astonishment, though, the Top Priest drew up a glass stool and asked Who Is Mighty to sit on it, watching him with great interest all the while.

“You, boy,” he said. “Suppose you were to be given a chance to live so that nobody could see what you were doing, would you take it?”

“Of course,” Who Is Mighty answered immediately. “That’s the only thing that would make me happy.”

“Even if,” the Top Priest continued, “it meant that you would have to leave everything and everyone whom you’d ever known?”

“Yes, even then,” Who Is Mighty answered immediately.

The Top Priest nodded. “I thought so.” He turned to Life of Abstention, who’d been watching open-mouthed. “You know well,” he said, “that we have no contact with the human world.”

“There is a prophecy, though, that one day we will again. One day, one of us will go of his own volition to the human world.”

“But why would anyone want to go to the humans? They’re...” Life of Abstention turned to her son. Her mouth fell open. “Him?”

“Who else do you know who’s so alienated from our society, so strange, that he would want to give it all up for...privacy?” The Top Priest’s face twisted as he spoke the alien word. “Who else could it possibly be?”

“In that case, shouldn’t we stop him?”

The Top Priest was astonished. “Stop him? Why should we stop him?”

“But why should anyone go to the humans? They have nothing but hate for us.”

The Top Priest smiled thinly. “I mentioned the prophecy. It says the one who goes to the human world will bring us great benefit. How this will happen will only be revealed when he gets there.”

“Is this true, Who Is Mighty?” Life of Abstention asked her son. “You would really go to the humans?”

“They claim to value it quite a bit,” the Top Priest responded.

“In that case,” Who Is Mighty said, “I most certainly will go to them.”

And so it was that a few weeks later, watchers on the walls of the nearest human cities watched a young Gork walk across the fields towards them.

At first the guards intended to kill him immediately, but cooler heads prevailed. “There’s only the one of him,” their sergeant said, “and he isn’t even armed. We can at least find out what he wants.”

So they went out and brought him under escort into the city, and if he noticed the spears pointed at him from all sides he didn’t mention them. His attention was reserved for all the wonderful, solid, opaque stone walls around.

“Such opacity,” he murmured. “Such lack of transparency! Such privacy!”

They threw him in a cell while they went to get the Chief Executive of the city. He’d made himself very thoroughly at home by the time the soldiers discovered that the Chief Executive wouldn’t be available owing to an important meeting. It was the same meeting that he was always busy at whenever anyone wanted him to do anything, so it wasn’t a surprise. But it did present the soldiers with a problem.

“What do we feed the monster?” they wondered. “We can’t let it starve to death before the Chief Executive gets out of his meeting, and that might be weeks.”

“They only eat human flesh, don’t they?” another soldier replied. “How can we get some of that?”

They began discussing the point, more and more loudly, until the newest and rawest recruit found the courage to speak up.

“Why don’t we just ask him what he wants to eat?” he asked.

This was such a novel idea that even though he was the newest and rawest recruit, they didn’t just laugh him out of the room. And in the end they went to ask the Gork what he ate.

“Fruit and vegetables, of course,” Who Is Mighty answered straight away. “And could you please not watch while I’m eating? I don’t like it.”

“If they eat fruit and vegetables,” the humans asked each other, astonished, “why does everyone call them ferocious maneaters?”

“We needn’t be scared of them any longer,” the others said. “We can advance into their territory, and take it from them.”

So the next day they all set out, in an immense army, to take Land of What-If by storm. The sun shone on their banners and glittered on their spears, and they marched with the easy confident steps of those who knew, without a shadow of doubt, that they were going to win.

And then the Gorks ambushed them, and massacred them, and ate them all – and not necessarily in that order, either. It was the greatest feast the Gorks had ever known.

What? I didn’t ever say they couldn’t eat human. I just said they didn’t.

Until Who Is Mighty came to the human world, they’d just never been able to lay hands on any, that’s all.