For several days, I had been grappling with a problem that was getting on my nerves: how to get across my ideas about imperialism, war crimes and capitalist evil in a way that communicated what I wanted to say without writing 5000 word essays which nobody read. Also, I had been itching to try out cartooning again.

Way back in the mid 2000s, I’d drawn a very short lived comic strip called Dana The Dozer Driver, which I published on Multiply. It was, even by the standards of amateur comic strips, hopelessly amateurish, and died a swift and deserved death. Now, six years after I’d given up cartooning, I thought about starting it again.

And so, sitting down to draw, I put pencil to paper, and Raghead the Fiendly Neighbourhood Terrorist was born.

This was how he appeared, right out of my imagination, the first panel I ever drew: 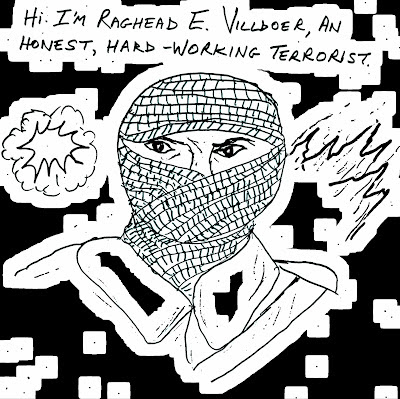 At that time I never thought I’d stick to cartooning. In fact it was strictly something I’d done to work off some frustration. But for some reason it struck a chord with people who used to read me then (now I know what that chord was: plummeting attention spans and the switch from reading to visual oriented media). And so I began drawing more and more. And the next day I set up a WordPress site, purely for cartooning.

Soon I realised that Raghead, alone, wouldn’t be enough: he’d need a foil, a sidekick. And so Towelhead came along. And once he was there, the rest, as they say, is history.

Towelhead was, and I admit this, a much nicer person than Raghead. At that time Raghead was a fully amoral international terrorist, though as time went by, he became more and more nuanced and multi-faceted, until it got so that I couldn’t even cast him as the evil antagonist any longer. But Towelhead was always nicer than him.

I have found this happening with my cartoons over and over again: each time I create a character, there is a sarcastic foil who appears almost spontaneously. Towelhead was the first of those, and, until the advent of Jihadi Rose, by far the best.

Of course Raghead and Towelhead weren’t enough. With them I could only keep the action where they first appeared, Syria; if I were to discuss happenings elsewhere, I either needed to introduce other characters, or only have the two of them (and a few sidekicks who appeared over time) discuss said happenings between themselves. I have never been a proponent of tell, don’t show – I needed to show things happening.

So, other characters made their appearance. Raghead and Towelhead were joined by a Saudi commander named the Mullah; Jihadhead, a far more radical character; and a drone named Jack the Reaper. Then, a couple of interchangeable American soldiers, Red and Ted (of whom Ted was slightly more intelligent and less trigger happy), who deployed in Afghanistan with an interpreter called Shuja. They used Shuja as more than an interpreter (to the extent of sitting on him while taking a coffee break). Finally Shuja shot up a unit of American troops in an insider attack and defected to the Taliban, becoming a commander (with a deputy called Hadeed who despaired of his inability to comprehend that being a Taliban commander also involved such things as oppressing women). And in Ukraine there was Stepan, boorish and boozy, and his own sidekick Andriy, a reluctant Nazi desperately trying to stop things from going too far.

By 2014, though, ISIS was on the rise and Raghead was no longer adequate. I couldn’t have him joining ISIS because by then he was in all but name on the government side, having even allied with a Syrian soldier named Bashar in a battle against al Qaeda. I needed fresh characters, fresh ideas.

And so Jihadi Colin was born.

To this day I can’t quite believe Jihadi Colin is purely a product of my imagination. Yes, I drew him, originally as a throwaway background character – yet within a couple of strips he took over not just the storyline but the entire strip. After he acquired his own sarcastic foil, the strip’s first regular female character (Jihadi Rose), he became the only real recurring character of any importance. 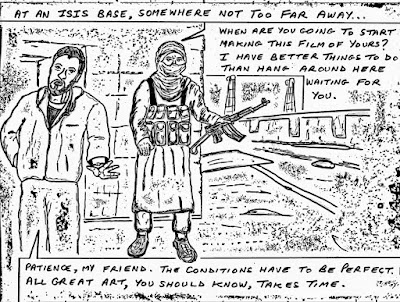 Jihadi Colin was everything Raghead no longer was; nuanced (he was far from a bloodthirsty headchopper, but he was a headchopper), a brutal fighter when necessary, with enough sensitivity at the same time to be disgusted by such tactics as human shield use, and sarcastic enough to etch stone. And Rose took that sarcasm to a further level, to the point that they are the only two characters of mine to make the jump from cartoons to fiction. I have written a novella featuring them and intend to write more.

By 2015 I’d begun drawing more and more single panel cartoons, too, as comments on particular happenings, and slowly these became more prominent. It helped that single panel cartoons tended to get republished on other sites, though of course I never got paid for them or anything.

All this time I’d been drawing in black and white, but in early 2016 I began to attempt colour. Until then I’d been using the Woodcut function on Corel to create the grainy background that was characteristic of my cartoons. But the grain was getting on my nerves, and cleaning it up took a lot of erasing.

I was hampered by the fact that I literally had no idea how to colour; Paint was all I knew, and Paint was awful for colouring when you have any kind of blemish on the paper. I still don’t know how to use most functions on any colouring programme at all, except Paint, which I finally taught myself. But at first my colouring was amateurish and took forever; and it shows.

Anyway, at this time I’ve probably reached, after five years of effort, the style that will characterise my cartooning for the foreseeable future. I don't know that I'd choose to change it any more even if I could. I'm comfortable with it, more or less, though I wish I had easier software options.

And so, with thanks to everyone who has stood by me during these years, here is your five year anniversary cartoon: 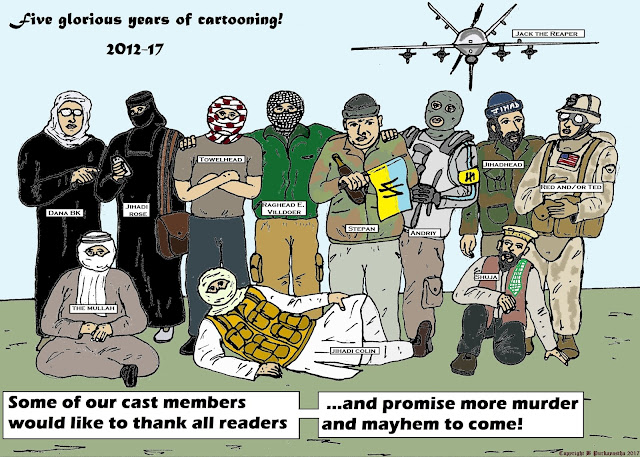 I hope the next five years will be as grand.
Posted by Bill the Butcher at 3:18:00 pm 4 comments:

This is, without a doubt, the most complex story I have ever written, and the longest (barring my novels). Also, because of its length, I have to post it as a downloadable PDF file, which you can see by clicking