Just a word about cancer

Today I had to tell someone he had a cancer of the jaw.

This was not altogether unexpected. He had turned up in my clinic a couple of weeks ago with a large ulcerating area in his right mandible, where the gum edges were raised, roughened and hard – like cartilage – to the touch. He’d first gone to some other dentist who, instead of even considering the possibility of there being a cancer – and for the life of me I can’t imagine how that might happen – extracted a couple of teeth. This extraction did nothing to improve the situation, of course, not least because the person concerned is also a diabetic with a blood sugar level between twice and three times the normal maximum.

If I were in a jokey mood I might have said he had blood in his sugar stream, but I am far from a jokey mood today.

When the now enlarged – owing to the extractions – wound in his jaw showed no sign of healing, the man concerned, let’s call him Mr H, went to another dentist. This second person said he had a fungal infection and put him on a course of antifungal medicines. Guess whether that worked?

In any case, as soon as I’d had a good look at his mouth and jaw – the jaw was actually distended at that point to almost twice the normal size – I decided on a biopsy. I excised a couple of wedges of tissue from two points of the ragged ulcer and sent them to a pathology lab for histological examination. Today, I got the report – and, to my overwhelming lack of surprise, it was, like almost all mouth and jaw cancers, a squamous cell carcinoma.

Now, a squamous cell carcinoma of the mandible is far from incurable. It will, however, require surgery with the removal of a large part of the right side of Mr H’s lower jaw, along with radiotherapy. Since carcinomas – unlike the other main type of cancer, sarcoma – spread mostly by the lymphatic system, not by blood, he might lose the lymph nodes along the right side of his neck, but hopefully nothing more than that.

I explained all this to Mr H. I told him in clear terms the kind of cancer he had, the likely prognosis, the fact that it was totally curable and the fact that said cure would require surgery, and of what kind. I realised at an early stage, though, that I was, basically, talking to a blank wall. He wasn’t taking any of it in.

“Can’t it be treated with medicine?” he asked me rather pathetically. I reminded him that his two previous dentists had been pumping medicines into him with no effect. And then he asked me if I was totally sure that it was cancer, whether there might not be a mistake.

I must explain that this kind of behaviour isn’t actually totally unknown to me. A large number of people tend to become so frightened that they might have cancer that they avoid even getting it checked just in case it could possibly turn out to be cancer, as though the act of getting it checked is what causes cancer. Some of them, ethnic Bunglees especially, won’t even utter the word “cancer”; they’ll ask imidly if it could be “something bad”. In the case of Mr H, I’m pretty sure that if he’d had had an inkling in advance that it might be cancer he too would have avoided treatment.

Anyway, as I went over the report again with him and explained exactly what the problem was, he suddenly broke down. His brothers, he said, were both dead, and he was the only surviving sibling, and he was willing to do anything to avoid a surgery. The whole thing was extremely distressing to me as well.

I have too much of an emotional connection with the people I treat. It’s not a good thing to have a temperament like that for this kind of job.

I’m glad to be able to say that Mr H seems to have pulled himself together enough to have gone to a hospital in town with an oncology department – he called to tell me he was going – but there are a lot more like him who would literally rather die than face up to the fact that they have cancer. I am not including people who choose not to have treatment deliberately after knowing that they have a cancer; I’m talking about those too terrified to face their diagnosis.

And of course there are the other lot – the scum that feed off the desperation of cancer patients and their relatives. Those people are beyond all forgiveness.

I had an uncle who died of lung cancer. It was a fairly protracted death, and during this process his wife – an extremely credulous woman – dragged him to all manner of astrologers, faith healers and other vampires who did this, that, and the other to “heal” him. Of course none of it worked, but they made good money out of it anyway. And you know that if they ever got cancer, they’d make pretty sure they were treated by the best doctors, and paid for it with the money they got from duping the poor and desperate.

Hell, at this point I’m willing to call them a cancer as well.

A Kind of Entertainment

The Lords of the Universe might laugh and jeer
And mightily gather to watch the fun
As hairless apes fight over squares of coloured cloth
And kill each other over myths from times long dead
While they crawl on a ball of rock
Turning round and round a minor sun.

Death Over Sakhalin: The Destruction of KAL 007

Because of the extreme length of this article - over 34000 words - I am posting it as a downloadable pdf file. Click on the link below the photo. 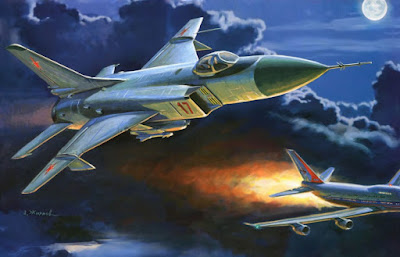