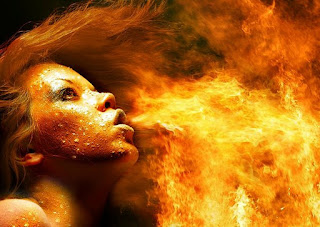 The Monster came at the dead of night
Snapped off heads with half a bite
Stalking the city, shedding blood
Till the streets ran in gory flood
He came at last to the Hero's lair
His stinking breath tainting the air
"Come out and fight," he said
"Or hide under your coward's bed."

Up rose the glorious Hero then
Muscles sleek with the strength of ten.
Buckled on his armour, hefted his mighty sword,
Went out to face the Monster without a word.
For such as he, these Heroes are
Born under a braver and brighter star.

Ah! such combat there was, my friends,
As a tear to my eye portends.
At last the Hero victorious stood
Above the Monster he'd chopped like wood,
And all happy once again would be
From the sea to the shining sea.

No, wait, I lie. The Monster roared
And yawned as if he was bored.
He twisted off the Hero's head
And quaffed all his blood instead.
Then belched quietly, and cleaned his teeth
For the Hero he ordered a wreath.
Then he went right home to bed
A good little Monster, when all's done and said.
And now my little tale is done
The Monster's coming. Go on, run! 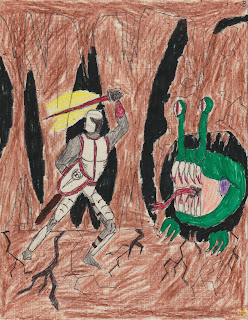 I am, of course, a proud liberal Obama-hater...

...who considers him a war-criminal and mass-murderer. And I hope he will pay the ultimate penalty for his crimes someday (I'd happily suspend my opposition to the death penalty for the likes of him and Killary Klinton).

However, I would not like to see Obama dance at the end of a Nuremberg-type rope. That's so...unoriginal and unaesthetic. Besides, it would hurt the legions of people who still, somehow, continue to worship at his altar.

...it would insult the rope.

So, hanging is not an option. No. Shooting him would make him a martyr. A drone strike would be poetic justice, but arranging for one might be problematic without  hurting innocents in the vicinity.

Therefore, I'd like to suggest an alternate fate for the Nobble Piss Prizident. One that would preserve his Messiah status in the eyes of his acolytes, and still be final (and agonising) enough to satisfy those of us who prefer to see him pay in concrete terms for his crimes against the people of the world.