Regime Closes In On North Pole

In a shocking report, activists present near Santa Claus’ toy factory at the North Pole said today that it has been under ceaseless shelling by heavy artillery and bombardment from the air, by rockets and barrel bombs dropped by the Syrian regime and its Russian sponsors.

“Assad,” the activists said, referring to the self-styled Syrian president, whose legitimacy for the post has been rejected by most nations in the Western world, “is intent on annihilating Santa Claus and the entire toy-making industry in the Free World. It is a terrible failure on the part of the West that it has not acted decisively to stop him.”

According to the activists and sources at the United Nations, regime forces have targeted Santa Claus’ toy storage depots, hitting all of them, in an effort to wipe out all stocks available. Furthermore, Russian planes have also struck at the toy repair workshops, all but one of which have been put out of commission. This last toy workshop in the North Pole has been forced to move into a shelter dug out under the ice, where the elves are working round the clock in a desperate attempt to create more toys and repair those salvaged from the destroyed depots.

Even the elves attempting to rescue toys from the ruins of the depots, the activists have said, are not safe from regime attacks. “Just this morning, a regime helicopter dropped barrel bombs on a team of White Caps who were digging out damaged toys from the rubble,” one activist said, over the phone, to Rueters. “It was only because they were able to withdraw quickly by flying reindeer sled that they were not harmed. However, many of the toys were blown to pieces, shattered, or otherwise destroyed. Their fragments litter the snow now, a testament to Assad’s and Russian depravity.”

The White Caps are the team of Civil Defence elves who have won international praise and renown for their brave efforts to rescue toys from under the ice and snow, and the rubble caused by Russian and regime bombardments as the assault on the North Pole enters its fifth year. They have been repeatedly nominated for awards, including the Nobble Piece Price, but to date have not been given any, in part, it is speculated, out of a desire on the part of the Piece Price Committee to avoid angering Russian president Vladimir Putin. The Syrian regime and its allies refer to the White Caps as “toyrorists,” saying that they are a propaganda outfit whose primary purpose is to prevent exposure of the “realities of slave labour and toxic materials used in the criminal Claus’ sweatshops, and his evasion of basic environmental and labour laws.”

Apart from shelling and bombardment by barrel bombs, the activists have accused the regime of using starvation tactics. “The brutal siege by the Assad regime,” they said, “has blocked all access of food and raw materials, tools and even the meth and booze the elves use to party on weekends...I mean, the essentials they need to live.” They dismissed with contempt the claims of the regime that elves, being magical creatures, did not need to eat and drink anyway. “Come to the North Pole and see for yourself,” they said. “Of course, you would have to get through the regime siege, and that’s easier said than done.”

They have also charged Assad with using chemical weapons. “Assad dropped barrels of chlorine gas over the North Pole again today,” they reported. “The tyrant wanted to choke us to death, but by Santa’s grace we saved ourselves by tying gift-wrapping paper soaked in snow over our noses.” As proof, they provided photographs of elves with their noses covered with gift wrapping paper.

A spokesman for the regime denied the allegations, also claiming – without citing any evidence – that wrapping paper soaked in snow would not block chlorine gas anyway. When confronted with the photographs, the spokesman said that chlorine gas would dissolve in water, such as the tear film of the eyes, creating hydrochloric acid, which would make it impossible for the elves to see, let alone take pictures.

Rueters contacted a senior officer at the Hexagon in Warshington about the allegation. “The very fact that the Assad tyranny knows so much about chlorine,” the officer, who spoke on condition of anonymity since he was not authorised to speak to the media, replied, “proves, without a shadow of doubt, that they did use chlorine. Also, it is not true that chlorine would leak through paper masks or damage eyes. I could show you the relevant sections from my chemistry textbook, but Putin’s agents have stolen it.”

The officer also said that this was the direct result of US President Raback Omaba not having invaded and ousted Assad in 2013. “Omaba laid down a green line,” he said. “A very dark green line, meant to protect the toyrorists from the regime. But he did nothing to enforce it, even when we arranged the excuse of a chemical attack...I mean, when Assad used chemical weapons against the elves. And now we see the result of that blunder.”

One of the elves contacted by Rueters said that he and his colleagues were living in deadly fear of regime attack. “We’re crouching in our underground bunkers, Tweeting and Skypeing by the light of walrus tallow candles, listening for the clatter of regime tank treads overhead,” he said. “We’re afraid that if we’re caught, we’ll be arrested, possibly tortured and executed.”

Meanwhile, Rudolf the Red Nosed Reindeer, who has been Tweeting from the North Pole, said that he and his mother Rudolfina have been shifting from one stable to another after their first one, and then the second, was bombed by the regime. “Assad wants to destroy us,” Rudolfina, who sometimes manages Rudolf’s Twitter account, said in an interview to Rueters conducted by Skype. “We haven’t received any fodder for months owing to the siege. Rudolf and I, and the other reindeer, have been reduced to scraping up lichen with our hooves, as our uncivilised ancestors did millennia ago.”

Both she and Rudolf have been accused by trolls on Twitter of running a fake propaganda account, a charge she angrily denied. “This is totally untrue,” she said. “They even say that the pictures I post of Rudolf looking so sleek and fat prove that we have access to food. This is ridiculous. It’s a well-known medical fact that starvation causes reindeer’s fur to become smooth and lustrous, their antlers to get long and sharp, and their bellies to swell with hunger. I would have called a veterinarian to support me, but the last veterinarian at the North Pole was killed by a regime bombardment ten minutes ago.”

Rudolf himself was more succinct. “I appeal to President Omaba to at once start the Third World War to save us,” he said. “If he does not do so, he will be helping in a war crime.”

Rudolf also gave credence to speculation that lack of Western intervention may cause the besieged to turn to radicalism. “In fact, I have been thinking of painting my nose black to join Abu Sleighda,” he said, referring to the outfit Russia and the regime claim they’re targeting, which is recognised by the West as a toyrorist group. "So far I have not done so, but it will be entirely the dictator’s responsibility if I do.”

With great difficulty, Rueters got through to Santa Claus. “I’m working night and day wearing a gas mask to ward off the constant chemical attacks,” he said, dismissing speculation that he was actually safely sheltered in a condominium on a resort island in the Sea of Marmara in Turkey. “I am very afraid that unless the west rises up, overthrows Assad, starts the Third World War with Russia and saves my bank bal...I mean, the North Pole...this might be the last Christmas in the world.

“I have only one message to the world,” he said. “If it is true that I have been using slave labour, ruining the environment, and using toxic components in the toys I make, it’s all in a good cause.

“Assad hates us because we bring joy to the children of the world,” he said. “That’s all there is to it. Assad hates our joys.”

Rueters did not attempt to reach either Assad or Putin for comment. 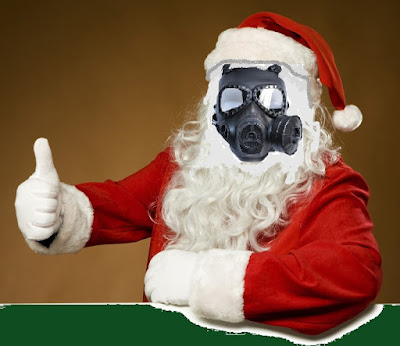