The Return of Stepan and Andriy, Or, You Can't Keep A Good Ukranazi Down

The Amerikastani campaign against Russia is showing distinct signs of desperation.

Syria is, albeit with only grudging and limited Russian help, still standing. The colour revolution attempt in Belarus is so dead that the Ameriganda has stopped talking about it. Iran has, contrary to the hopes of the Trump regime, not caved in and imploded, and it won’t. The current Bidet regime (if the shambolic brain dead war criminal which pretends to be the “president” of Amerikastan can be said to be in control of a regime at all) is talking about “encircling” China. Good luck with that; I would love to watch Chinese anti-ship missiles send Amerikastani carriers to the bottom of the sea.

But the primary target has always been Russia.

Why? For the same reason that Amerikastanis have always been out to destroy Russia; it is the only bulwark in the Amerikastani Empire’s campaign to rule the planet. It nearly was successfully destroyed during the 1990s, but since then has recovered sufficiently to no longer be any kind of pushover. And to their baffled fury, the Amerikastanis have realised that.

Of course, anything Amerikastanis claim can automatically be assumed to be a deliberate lie, so it isn’t exactly a surprise that anything they say about “freedom”, “democracy” or suchlike claptrap is rubbish; Amerikastanis care about only one thing, which is looting the planet until there is nothing left. And to loot the planet, they not only want to plunder Russia, but countries that currently are protected from total looting because they trade with Russia instead of Amerikastan. And among those countries are even Amerikastan’s own slaves and vassals of NATO, who have as yet not been looted enough.

Part of this loot is the question of natural gas. Contrary to the fond fantasies of certain people, fossil fuels are still absolutely essential for everything from industry to transport to domestic use. One of the more important fossil fuels happens to be natural gas, which Russia has in abundance and has been selling to Europe. This gas travels by pipelines, and most of it is piped through what used to be Ukraine and since 2014, when the blood soaked mass murdering child droning war criminal Barack Hussein Obama arranged a Nazi coup in Kiev, is now Ukranazistan. I have elsewhere written in detail about the wreck that is Ukranazistan, and my conviction that Russia should have eliminated the Nazi coup regime by launching an actual invasion in 2014. I am not going to repeat myself here.

But Ukranazistan levies fees for the transport of this gas, and in order to get it cheaper (right in accord with the capitalist principles the Imperialist States of Amerikastan alleges to revere), Germany – one of Amerikastan’s most slavish NATO vassals – agreed to construct an alternative pipeline under the North Sea, called NordStream II, to ferry Russian natural gas to its territory. And despite the frenzied rage of Amerikastan (and of Amerikastani agents like the warmonger propagandist Jihadi Julian Röpcke of Bild), the pipeline construction has proceeded, with only 150 kilometres of its 1200 kilometre length still incomplete as of this writing.

Why is Amerikastan so frenzied? Is it because Ukranazistan is going to lose out on transit fees? That’s a bad joke; Amerikastan has itself already looted Ukranazistan to the bone in seven years. It’s in a frenzy because it wants to compel Germany to buy Amerikastani gas.

Amerikastan, you might know, is a third of the planet away from Germany, while Russia is almost next door.

So Amerikastani gas would have to be transported from fast-failing fracking oil wells in Texas or wherever to ports on the coast, pumped into natural gas container ships, sailed across the Atlantic to the European coast (if not actually to Germany itself, at least to one of Amerikastan’s other slaves, like France, Netherlands or Belgium), then unloaded (in specialised port facilities that would, of course, have to be built, and I can assure you that it would not be Amerikastan who would be paying to build them) and transported to recipients in Germany. Who would be paying much, much more for their gas, and all of that payment would find its way to the pockets of the Amerikastani imperialists in Wall Street.

Also, and not a coincidence, the increased prices of gas would raise the costs of German industrial products, and who do you think imagines they could take advantage of that to sell their own, such as they are?

Even the German regime, while abject NATO slaves, are not so stupid as not to see that. So they have ignored Amerikastani blustering and threatening with sanctions, and have gone right along with construction of that pipeline.

And Amerikastan, faced with its imminent completion, is nothing short of desperate.

Their first attempt to sabotage the pipeline was last year, with the affair of Alexei Navalny. Navalny is a wannabe politician with a sub-1% popularity rating in Russia. He is also a convicted criminal, a racist and wannabe genocidaire who calls Muslims “flies and cockroaches” who need to be “shot”. And he is the head of an “anti corruption foundation” paid for by guess who. This Navalny is also, according to the Ameriganda, “Putin’s most important opponent”, when he couldn’t win an election to the post of chief sewer inspector. And when this Quisling (who is also a diabetic and dependent on multiple medications, some of which are anti psychotics) fell sick on a flight in Russia, he was – with Putin’s full acquiescence – airlifted to Germany. Then a German military lab – without , of course, providing a shred of proof – alleged that Navany had been “poisoned” by Novichok.

Novichok, by the way, is an extremely potent nerve agent. But not only did it not kill Navalny, it somehow does not seem to have harmed him seriously at all.

I am not going to depict the whole saga of Navalny’s alleged poisoning in detail; a good article on the subject is here. I will, however, repeat my comment to that article:

“...Putin needs Navalny. A racist drug dependent would be genocidaire and Quisling might be ‘the greatest opponent of Putin’ in Amerikastani Empire propaganda, but in actual elections he’s guaranteed to vanish without a trace. He’s a safe outlet for the Moscow liberal yuppie Wall Street tool traitors. While they’re pouring all their energies into supporting this dead duck, they can’t put up any genuinely competent candidate against Putin...if Navalny hadn’t existed Putin would have had to invent him.”

As might be expected for a racist Quisling jailbird with a popularity rating hovering just north of zero, the “protests” in support of Navalny – which schoolchildren had to be duped into attending by telling them there would be a party – fizzled out in short order. Also, despite it being a German military lab that was used to spread the “Novichok” canard, which was immediately parroted by the Merkelist regime, German businessmen still kept the health of their bank accounts paramount, and NordStream II is still going ahead.

Given the desperation of Amerikastani propaganda  and its reliance on “Novichok”, I’m kind of surprised that when the senile war criminal Joe Bidet, so-called “president” of Amerikastan, fell repeatedly while trying to climb the steps of Air Force One, Ameriganda didn’t immediately blame it on Putin and Novichok.


After all, Bidet had only called Putin a “killer” a couple of days before, made unspecified threats against Russia, and Amerikastani media had deliberately twisted Putin’s eminently sane and nuanced response.

So, with the window of opportunity to sabotage NordStream II very rapidly closing, and Belarus is not about to fall, Amerikastan has just one more card to play. That card is Ukranazistan.

The Ukranazi coup regime that took power in 2014 is now a dysfunctional shambles. Its current “president”, a former comedian named Zelenskii, is a total marionette of the Nazis, without whose orders he doesn’t dare to move a muscle. The Bidet war criminal’s son, implausibly named “Hunter”, is complicit in Ukranazi corruption. And Amerikastan, as I said, has already looted Ukranazistan of everything it can carry away. It can more than afford to sacrifice the place to achieve profits for Wall Street.

So, the last few weeks have seen the Ukranazi army – and its openly Nazi formations, such as the Azov Battalion, which flies swastikas and the WWII collaborationist Wolfsangel symbol, wears “slaveowner” patches, and venerates surviving Ukrainian SS members – has begun massing armour and troops on the borders of the two Donbass republics (the Donetsk and Lugansk People’s Republics, if you don’t know) and increased artillery and small arms attacks on the Donbass people. This is, of course, openly known to non Western media sources, and has been extremely well reported on, including videos from within Nazi Ukraine. But it is being kept totally silent in Western media.

The answer is more than obvious. The purpose of the Ukranazi buildup is to launch an attack on the Donetsk and Lugansk People’s Republics. The media silence is to present what happens afterwards as a total surprise.

And what will happen afterwards?

One possibility, which is admittedly unlikely, is that the DPR and LPR armies will annihilate the Ukranazis, as they did in 2014, in the field of battle. It is unlikely because the Ukranazis are much stronger than they were in 2014, are numerically far superior (about a 10:1 advantage in manpower, on paper), and have total control of the air. The DPR and LPR have substantially the same level of weapons as in late 2014-early 2015, and have, on top of that, lost their best leaders, Givi, Motorola, and Zakharchenko, to targeted hits and assassinations. If it were a guerrilla war, they might be able to resist successfully. But it will not be a guerrilla war – the Ukranazi lines are literally in sight of Donetsk Airport, and it’s only a hundred kilometres to the Russian border – and if their lines are broken at just one point, without help they are going to be overwhelmed.

And that is the whole point: to present Russia with a problem that it can resolve in one of two ways.

Assuming that the DPR and LPR between themselves will not be able to beat off the Ukranazi attack, Putin will have two choices:

One, to stand by and let the Donbass republics be overrun. This is an election year in Russia, which, contrary to what you may have heard, is not a dictatorship and has elections. Many of the people in the Donbass republics – at least 10% of the population, probably more – have Russian passports. The spectacle of refugee columns of destitute Russian citizens, alongside ethnic Russians, streaming across the border is unlikely to do Putin’s popularity much good, especially when the public mood in Russia is getting increasingly confronatational in the face of neverending insults from the west. So, it’s extremely unlikely that Putin can even contemplate doing nothing.

The other choice, which Amerikastan is putting its money on, is that Russia will be compelled to intervene to destroy the Ukranazi attack. This will, of course, be immediately presented as a “Russian invasion” in the Ameriganda, and it is unlikely that the Merkelist regime will then be still able to go on with NordStream II. Of course, Russia should have destroyed the Ukranazis in 2014, so the current situation is of Putin’s own making, but it does not make it any less of an Amerikastani war for all that.

A few months ago I resurrected my retired cartoon characters Raghead and Towelhead. At that time I had mentioned other retired characters, the Ukranazis Stepan and Andriy. And look, here under the Bidet regime they are back again!

Amerikastanis might no longer find jobs for their young people, but they never have problems finding employment for terrorists. 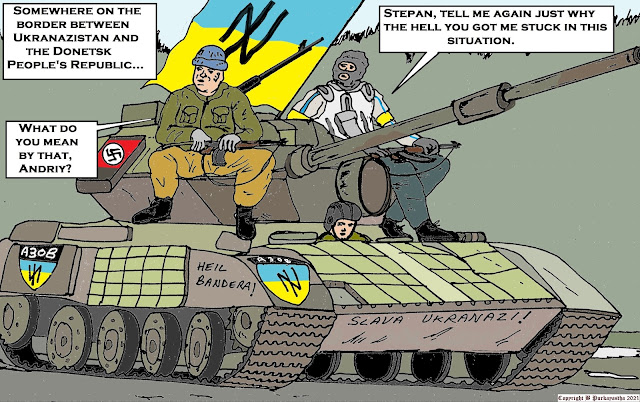 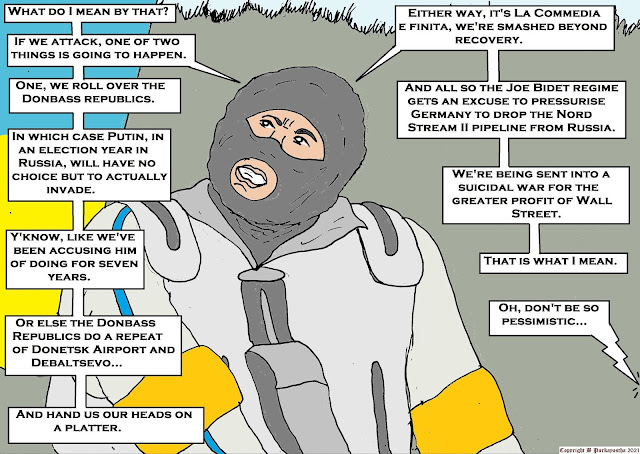 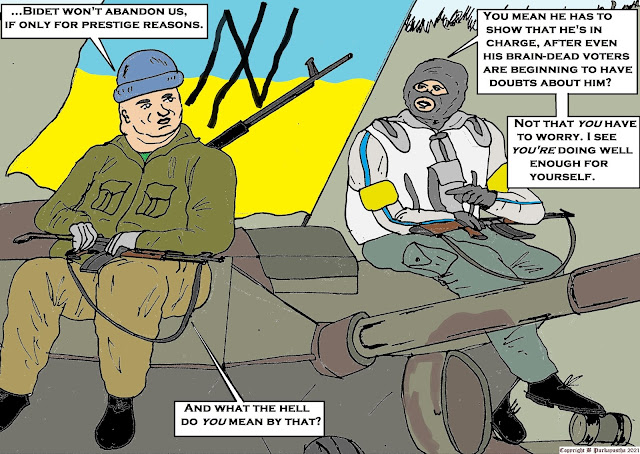 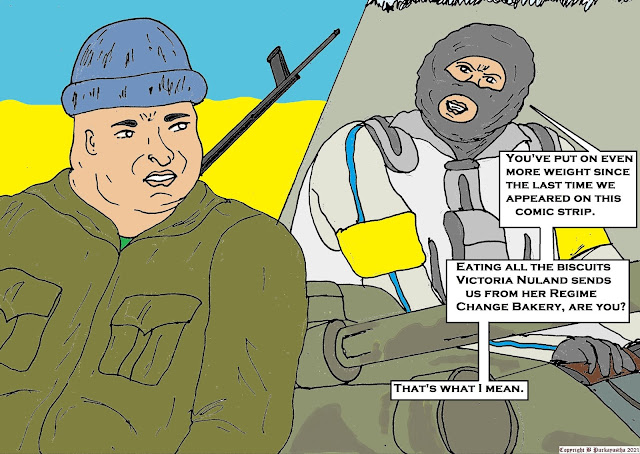