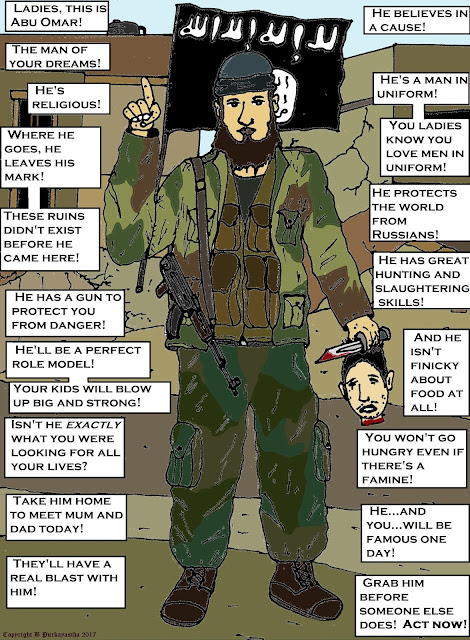 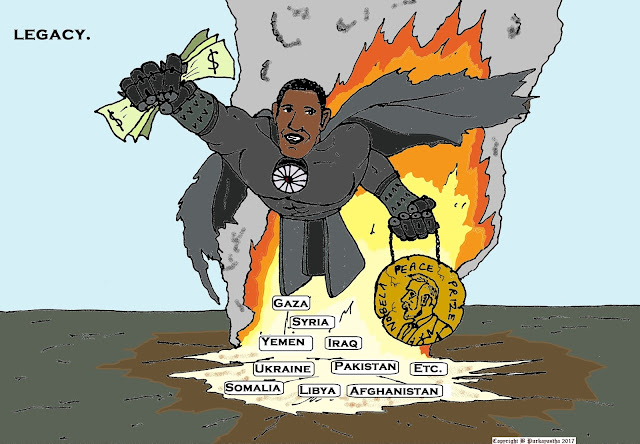 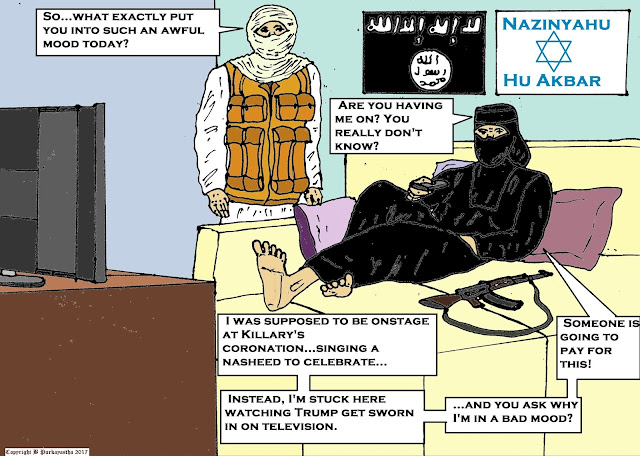 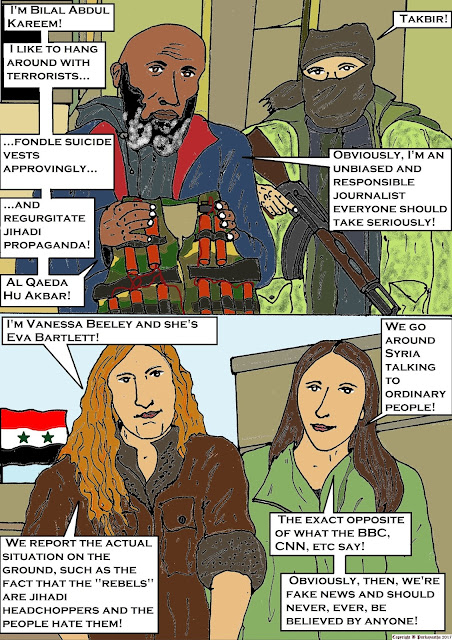 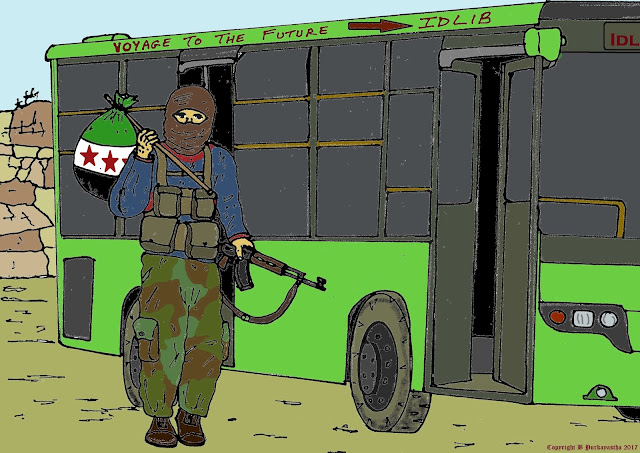 You call us racists for hating him
And it's true
We're guilty
We admit it.

How racist it is of us
To hate him only because
He unleashes jihadi cannibals on us
And drones our children. ﻿ 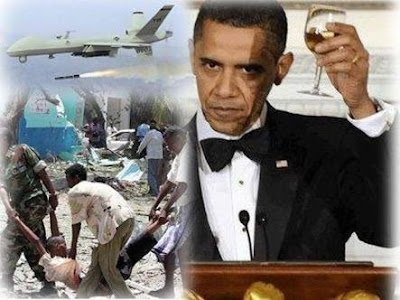 An Occurrence at Fort Dungeon Deep

Last night I had a dream that reminded me, in hindsight, of a rather famous story.

I dreamt that I was in a city with an old fort or citadel, large and made of brown stone, with palisades and battlements. I was with a tourist group which was wandering about this fort, when all of a sudden an ISIS unit attacked the fort and overwhelmed it without encountering the slightest resistance.

I assume you will not be surprised that I wouldn’t be someone ISIS would let go. And I didn’t exactly want to star in ISIS videos, even if given a snazzy orange jumpsuit to wear. I don’t much like spraying blood, even when it’s my own.

The first thing that happened after the ISIS takeover was that a lot of the people in the fort abruptly changed sides, immediately swearing allegiance to ISIS. The jihadi headchoppers at once deputed these new recruits to hunt down people trying to escape or hide, people like me, for example.

By then I’d broken away from the group waiting to be vetted by the headhunters, and was scrambling up into the upper part of the fort, hoping to be able to find a breach in the wall to be able to reach the grassland beyond. The only problem was that at least two of the new recruits were chasing me – and though they were armed only with small knives, they were highly determined. As well they might be, since they were under orders to capture me or pay the penalty for being insufficiently loyal to the Caliphate.

I was making for a gap in the wall beyond which I could see the grass of the hillside, which seemed quite close at that point, and, I thought, be easy to reach. The two ISIS chasing me were gaining on me fast, but I was almost at the gap, and one quick leap should see me through. At least on the hillside I’d have a chance.

And then I arrived at that gap and found that it was, actually, separated from the hillside by a second wall, and before me was a dry stone moat, far too wide to jump over and so deep that if I fell in I’d break pretty much every bone in my body.

There was no point running further, with the two of them closing in from both sides; and that’s where they caught me, standing at the gap looking down into the moat. They took me back to the others, holding me by the arms, and pushed me down among a few people whose fate seemed to already have been decided.

Apparently, there weren’t enough orange jumpsuits to go around, and perhaps the ISIS there were pushed for time. Either way, I was almost instantly pulled out of the waiting group, and, along with a few others, was pushed down a flight of stairs to an underground room I hadn’t seen before. In the middle of the floor was a large tank of water like a miniature swimming pool. One of the ISIS lashed me into a jacket which seemed to be weighted down – it was extremely heavy – and threw me, fully clothed, into the tank. With the jacket dragging me down, I began to sink, head first, like a stone.

What were my emotions at this time? I don’t really recall; it was happening extremely quickly, and I don’t think I had any particular thoughts. Certainly, I wasn’t feeling greater fear than I was earlier, or indeed any at all. I don’t think I was feeling anything.

Then, as I sank, the dark bottom and sides of the tank dropped away and became silvery and light, and I saw that there was a round aperture in the floor, like a tunnel. I was dropping right towards it, and I dimly sensed that the others who’d been dragged in after me were following me right down into that pit.

At this point everything began to move in slow motion. Bubbles crawled up the silver walls, touched my face, and streamed slowly past me to the surface. I dropped down into the tunnel, the sides almost brushing my shoulders, glimpsing cameras set into the sides, recording my fall.

It was not a smear of smoke.

As I fell closer, the smear suddenly gathered itself up on tentacles, and swam up towards me. It was like a gigantic black octopus, so large that it dwarfed me completely. It caught me in its tentacles, flipped me over, and I saw a huge crumpled mouth start to open just above my face.

The next thing I knew, I had broken away from the group of people being held by ISIS for execution and was running for the fort gate as fast as I could run. I was quite dry, and didn’t have any weighted jacket on. I had taken them by surprise, and nobody noticed for a moment that I’d escaped. Before the shouting and shooting started, I was at the gate, had pushed through, and was in the street outside.

And in the street outside was life as usual. People going about their normal business, as though there weren’t headchopping terrorists on the other side of a stone wall getting ready to commit mass murder of prisoners. Nobody even gave me a look as I ran past them until I could run no more, and slowed down to a walk.

I was in the middle of a city which I didn’t know. It was late afternoon, and I had to find my way to safety as quickly as I could. I knew I wasn’t out of the woods – they’d chase me and they’d find me unless I could get off the streets.

The only place I could think of was my hotel, and I hadn’t any good idea where it was. All I remembered was that it was of old-style construction, with wooden floors and bay windows. I began walking randomly looking for it, not trusting anyone I saw in case they gave me away. Soon I was out of the main city, walking along a road lined with tall trees, with green fields on either side.

As I went I began to remember the people I knew, some of whom (including you, the person reading this) probably considered me as a friend. I began to imagine how they’d have felt if I’d actually been killed by my ISIS captors, those of them who’d know. And I began to wonder how many of them would even remember me, after a few days had passed.

It suddenly seemed extremely important that I should have said a goodbye.

And then it was night, and in the distance I saw lights. Soon enough I recognised them; it was my hotel.

As I let myself into my room and locked the door behind me, I sighed with relief. They wouldn’t find me here. The next morning I was leaving, and I’d go far away, and then I’d tell everyone what had happened, and let them know I was safe. I kicked off my shoes and threw myself down on the bed, looking up at the ceiling. The room lights were silver and bright.

The room lights were too silver and too bright.

And I was back in the tank, looking up at the black octopus, and I tasted metallic blood as the crumpled mouth came down.

This is not the first time I’ve dreamt of my own death, as anyone who’s read me for a while is well aware. I’ve previously dreamt that I’ve been beheaded, and executed by lethal injection, and (at the age of five or six) run over by a vehicle and poisoned...and that’s only in the dreams I remember. This one, though, was not just extremely vivid, but it reminded me of the story I mentioned.

The story is, of course, Ambrose Bierce’s An Occurrence At Owl Creek Bridge. Since this is one of the most famous stories in the English (or, in this case, Americanish) language, I think a lot of people reading this will be familiar with it. If you aren’t, I suggest you read it now.

So what does this dream basically mean? Not much, except that I just want to let you all know – while I still can – that I truly appreciate you and that I am extremely grateful for all the appreciation you’ve shown me during all these years.

And in case ISIS intends to cut off my head, I’d rather be eaten by octopus first! 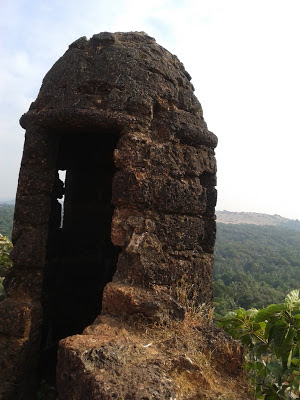 Cry-sis on the Frontier 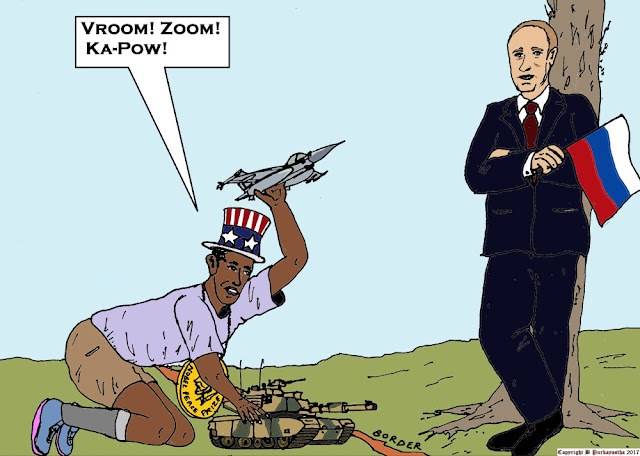