I don't know if you knew that this animal even exists.

So this is the Ganges Dolphin, Platanista gangetica. Like all river dolphins, it's highly endangered, and though it's been belatedly named India's national aquatic animal, I don't know what good that will do in an era of rampant damming of rivers and trashing of environmental regulations by the same government that proclaimed it the national aquatic animal.

This is the typical body shape of all river dolphins - a long, thin rostrum ("beak") for probing along river bottoms for food, a long, flexible neck (sea dolphins have stiff necks with fused vertebrae) for ease of manoeuvrability among river bottom clutter like sunken trees, and a wide-angle sonar (note the bulging forehead, where an organ called the melon focuses the sonar beam). In contrast, sea dolphins have a narrow angle sonar since they can mostly see where they're going. River dolphins have poor eyesight - this particular species is functionally blind, with the eyes reduced to tiny pits on the sides of the head. There isn't much point in good eyesight in heavily silted river water, after all. 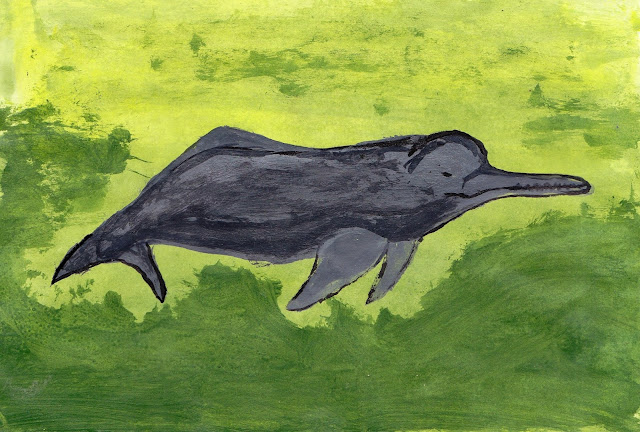 Material: Acrylic on Paper.
Copyright B Purkayastha 2015
Posted by Bill the Butcher at 8:10:00 pm