As you all know, I don’t usually re-publish material from elsewhere on the internet on my site, which is restricted to my own writing and artwork. But as everyone ought to be aware by now, I’m more than a little concerned about the Nazi hordes which Western meddling has deliberately let loose on Ukraine since last year. But even by those standards, I think you’ll agree that things have gone too far in this case.

Remember that when scientists allow themselves to be yoked to the chariot of the prevailing ideology, they lose any objectivity that they may have had, and become merely propaganda outlets. Like the racist “scientists” of the eighteenth century like Rousseau, who “proved” that black people were not really human and could not feel any kind of emotions – thus justifying turning them into self-repairing, self-reproducing agricultural machinery – these “scientists” will then “prove” whatever they are told to. I’m afraid that the Ukrainian scientific community, or those of them who are left, have already succumbed to those pressures. I can only hope that they can turn back before it is too late.

In a statement released by the Department of Anthropology of the Stepan Bandera University of Ukraine in Kiev today, palaeontologists and human evolution researchers Dr Nichego Neznayev and Professor Praviisektor Chortenko made a startling announcement: the earliest known skeleton of a hominid in Europe had been discovered in the south west of the nation, near the modern town of Slava Ukrainii.

“We have been conducting excavations in a series of caves in western Ukraine,” Dr Neznayev said, “based on stone tools and other indications we had found that there had been prehistoric human activity in the area. We expected late Neandertal and probably some Cro-Magnon artifacts, and possibly some remains. However, what we found was much more than we’d expected.”

“In a cave system below the town,” Professor Chortenko said, “we came across a skull and most of the skeleton of a very ancient hominid, certainly predating the Neandertals, let alone the Cro-Magnons. Though we are still in the process of dating the remains, they seem to be not less than a hundred and twenty to a hundred and fifty thousand years old, and more likely towards the upper figure.”

This hominid, according to the scientists, was very different from the Neandertal both in stature and skeletal form. “It had a finely-structured, relatively modern-appearing skull, with a brain much larger than the average Cro-Magnon, and larger also than the Neandertal. While the bones were not, naturally, as robust as those of a Neandertal, the muscle attachments are large enough to indicate a strong, athletic build. The skull, had somewhat heavy brow ridges, which would have given the hominid, in life, the appearance of deep thought. It would have been exceptionally good-looking in life, tall and muscular, a perfect specimen of the finest of European humanity today.” 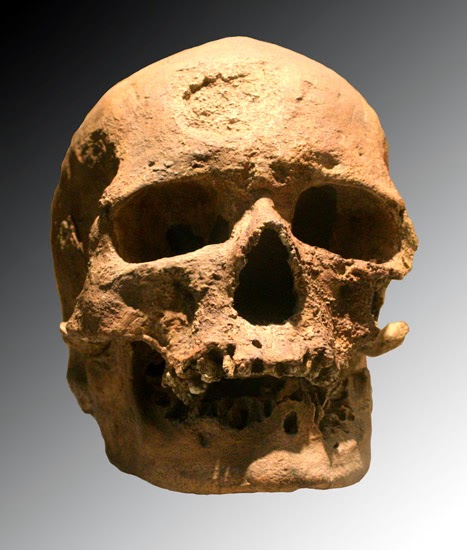 Even more startling than the skeleton itself, the scientists announced, were the tools and artifacts discovered in the cave. “These creatures, despite the age of the remains found, had already achieved a very high level of cultural development,” Professor Chortenko said. “It was obviously a burial place we had discovered, because the skeleton had been laid out as for a funeral, with blue and yellow flowers by its side and stone carvings and weapons as well.” The carvings, he said, depicted beautiful young women, who would have represented the society from which the hominid had sprung.

According to the scientists, the hominid had, when buried, been clad in skin clothing of a high quality for the period, stitched with sinew and secured with bone buttons. The weapons buried with the skeleton proved, they said, that the individual was probably a warrior, who might well have gained fame and high social status from protecting the people from attack by enemy groups. And since no such remains have been discovered further west, they said, this made it likely that the enemies he would be defending against would be from the east.

“The most extraordinary weapon we found,” Dr Neznayev said, "was a stone trident, amazingly well fashioned, and very similar in appearance to the modern coat of arms of the Ukrainian nation. And on the base of it we found a device that is very reminiscent of the Wolfsangel symbol which, as we all know, has deep resonance in our society and which our patriotic defence forces use as their battle emblem while fighting the Russian invaders in the east.”

“In short,” Professor Chortenko added, “we have someone who was here before the march of history even began, but who was someone as much of Europe as to not be separable in any way from its modern ethos. From his elegant form to his large brain, from his high culture to the weapons with which he defended his people from enemies who almost certainly came from the east, he was a true son of Europe and in all probability would be more than welcome to it today.”

“As soon as the excavations have been completed,” Dr Neznayev said, “the skeleton and all the tools and other artifacts will be removed to Kiev and Western European and North American archaeologists and palaeontologists will be invited to examine them. We,” he added, in an apparent attempt to pre-empt any suggestions that the finds could have been faked, “have nothing to hide.”

However, in a move certain to raise a certain amount of controversy among palaeontologists and archaeologists worldwide, the scientists announced that the University had decided to name the newly found hominid Adolfopithecus hitlerus, in recognition of “another great warrior who fought against the barbarian hordes of the east, and who is only now beginning to get the acceptance that is his due.”

Speaking in Paris, a spokesman for the French government responded by saying that according to international scientific naming conventions, the discoverers had the clear right to name the specimen whichever way they chose, and there was nothing anyone could do about it unless it was proved that it belonged to an already known and identified species, or unless the name had been already given to another creature. “Since neither of these factors seems to be operative in this instance,” he said, “we accept the new nomenclature and congratulate our Ukrainian colleagues on their discovery.”

Meanwhile, Ukrainian Prime Minister Arseniy Yatsenyuk issued a call to Western nations to immediately send troops to save the skeleton and burial site from Russian invaders, who, he said, were massing on the border to seize them and “find” them again in Russian territory so as to claim the discovery as a Russian one. “Putin,” he said, “is burning with rage and jealousy, and fears for his hold on power once it becomes known that a Ukrainian was the first modern human in Europe, and was already defending the nation against Russian barbarians.”

In Washington, State Department spokesperson Jen Psaki said that the US government had taken serious note of the appeal, and would make its position known in a couple of days.

Speaking in Moscow, however, Russian Foreign Minister Sergei Lavrov said that Russia would protest against the decision, and...

[Read the rest on the original website, here.]
Posted by Bill the Butcher at 8:05:00 am