Believe it or not, what you saw in those films by Stephen Spielberg has come true. Science has just resurrected a dinosaur!

Take a look at this photo. 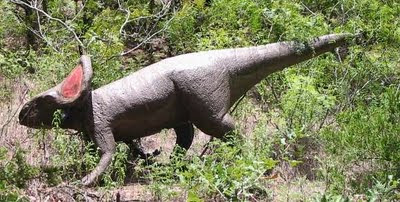 It’s of Tressie, a baby Triceratops (you know, those big, horned dinosaurs like rhinos?). She was cloned from DNA from Triceratops eggs laid 65 million years ago near what is now Laramie, Wyoming, and is currently kept in the American Palaentozoology Research Institute in Casper, Wy. According to informants, the DNA was spliced with genetic material from the Tuatara of New Zealand to fill gaps in the amino acid sequences; the Tuatara is of course a living remnant of the dinosaur age.

Tressie was incubated in an artificial egg, is now six months old, and will grow her horns as she matures. Her neck shield is bright red, incidentally, which may be an adaptation meant to attract mates. Tressie is friendly, quite intelligent for a dinosaur, and eats grass and ferns. The scientists say that they’ll try to clone a male next and breed Tressie.

Tressie’s existence was accidentally revealed when an email from one of the scientists at the Institute to a colleague in England was leaked, but is still officially denied. The scientists who cloned and are studying her say that her existence is a closely-kept secret because it might upset Creationists in Congress and elsewhere, and they might cancel the grants that keep the Institute functioning.

Isn’t it exciting to think we might have a real Jurassic Park for our children to visit? This is so cool!

Update: I think it's time I came out with it and admitted that this is a hoax I deliberately created and disseminated to see how far it would go.
Posted by Bill the Butcher at 9:04:00 pm