Pretty much the entire world has now been deluged in the information that someone committed a rash of attacks in Paris, France, on Friday the 13th November. The attacks, allegedly, involved the use of multiple “suicide belts”, mass shootings, and hostage takings. 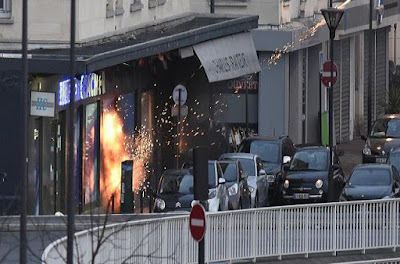 The first question, of course, before anyone even asks who is responsible, is how could this ever happen? How could any nation,  which has allegedly been on high alert since the Charlie Hebdo attacks earlier this year, miss such a complex plot being readied? It can’t have been set up overnight, after all; you don’t gather five, or seven, or whatever figure the French government pulls out of the air, suicidal attackers from nowhere; you don’t plan detailed attacks without extensive reconnaissance, training, and – if history is anything to go by – dry runs as well.

These attacks, in other words, were not the actions of “lone wolves”, or even homemade “terrorists” like the July 2005 London train bombers; they were planned, directed, financed, and organised by somebody. And such planning, organisation, and financing always leaves a trail; a trail which ought to be picked up by any competent intelligence agency.

In fact, by any reasonable circumstances at all, these attacks could not have happened without someone, somewhere, in an official position getting to know of them. This would be especially true of a country which “suffered” a “terrorist attack” only in January, and was on alert. It therefore leaves only the following options:

The French security services were utterly incompetent, despite their phone tapping, data collection and all the rest of the snooping any “democratic” regime routinely carries out on its citizens,

They knew these attacks were going to happen, but chose, for their own reasons, to let them go ahead anyway,

They actively helped organise and carry out the attacks, with or without the knowledge of the actual perpetrators; in other words, it was a false flag operation.

There is no fourth explanation.

At the moment of writing, I do not know who these attackers were, and nor, to be frank, do I greatly care. From the modus operandi, one might take it that they’re “jihadists”, but they might also be, for example, the anti-Iran terrorist organisation Mujahideen e Khalq, which the US State Department declared not to be a terror organisation, and which has a presence in France. It could, of course, be ISIS. It could be al Qaeda. It could be any of the many, many other terrorist organisations that sprawl all across the huge mass of territory that is itself terrorised by France.

Did I say that there’s territory terrorised by France? Yes, that is exactly what I said.

Here’s only a partial list from the recent past:

1. In Francophone Africa, France still militarily occupies its former colonies, and closely controls their policies. It exacts a colonial tax from them. No government which may be independent of French influence is tolerated. On the other hand, regimes friendly to France can get away with whatever they want. The Hutu-on-Tutsi part of the Rwanda Genocide of the early 1990s, for instance, was watched over by the then Rwandan regime’s patron, France, which lifted not a finger to halt the massacres. (Meanwhile, the Tutsi-on-Hutu slow motion genocide in that same country has been watched over benevolently by the Imperialist States of Amerikastan, but that’s a different story.)

2. Haiti, a former French slave colony, is the most desperately impoverished nation in the Western hemisphere. Why? Because when, in the early 1800s, the great revolutionary Toussaint l’Ouverture launched the slave rebellion that drove out the French, Napoleon demanded that the new nation pay compensation to France for the loss of slave labour, or face invasion and reoccupation – a compensation which  is still being exacted to this day, more than two hundred years later.

3. Libya, in 2011, was a modern, progressive nation with a high standard of living and a solid socioeconomic base. So what happened to Libya? Using the (faked) excuse of a (nonexistent) imminent massacre in Benghazi, France, along with its fellow war criminal nations of the European Union, and of course with the full military support of the Imperialist States of Amerikastan, deliberately misinterpreted a UN resolution and used it as a pretext to destroy the government. France, in effect, acted as the air force of a disparate collection of jihadi scum, who have now vivisected that country and are fighting among each other.

4. Syria, in 2011, was another modern, progressive nation with a high standard of living and a solid socioeconomic base. Just as in Libya, France, along with its fellow EU war criminal nations, lent its full throated support to a disparate collection of jihadi scum, declared that the legitimate president of Syria, Bashar Assad, “should not be there on this earth”, and would have eagerly joined in bombing that nation if only the blood soaked Amerikastani mass murderer and warmonger-in-chief, Barack Hussein Obama, had not backed down when his own Congress refused to go along with his nefarious scheme of another bombing campaign in support of al Qaeda.

5. In Ukraine, France, along with its fellow EU war criminal nations, helped to overthrow the legitimate government of Viktor Yanukovych in February 2014, and helped to hand that nation over to a cabal of oligarchs and out and out Nazis. When the Russian-speaking population of eastern Ukraine rebelled against this Nazi regime, France – accusing Russia of instigating said rebellion – imposed economic sanctions on Moscow and reneged on the delivery of ships Russia had paid for. Only when the rebels began a massive offensive which sent the official army of Ukraine and its out and out Nazi militia allies reeling back in defeat did France go rushing to broker a truce.

6. In Egypt, France openly backs a military dictator who has used anti-aircraft weapons on peaceful protestors and has had his opponents sentenced to death en masse. It has also agreed to sell said military dictator the ships that were supposed to have been delivered to Russia.

7. In Yemen, the single poorest nation in the Arab world, the Wahhabi terrorist state of Saudi Barbaria has been conducting a war of aggression for over half a year. This Saudi Barbarian regime, which also beheads people for “witchcraft”, openly backs jihadi groups, and has sentenced a teenager to crucifixion, is a regular recipient of French armaments, which it then uses to bomb weddings and schools, houses and civilians of all descriptions.

8. In its own territory, France actively racially discriminates against citizens of Arab origin, who are forced into slums under conditions that can be distinguished  from apartheid by name alone.

9. In January 2015, the aforesaid “satirical” magazine Charlie Hebdo, which in most nations would be known as a hate speech rag, was, as I’ve mentioned, attacked by “terrorists”.  The government of France organised an international “march” in support of the magazine, and then paid taxpayer money to subsidise Charlie Hebdo’s increased print run, thereby associating itself with this rag’s hate speech.

As an example of recent “satire” by Charlie Hebdo, here are a few cartoons by this “satirical” organ on the crash of a Russian passenger plane over Sinai, most likely due to a bomb. I am posting these with apologies to the relatives of the victims - not to mock them, but to show what a despicable hate rag Charlie Hebdo is. 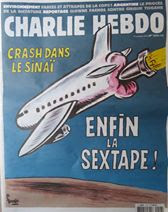 Here’s what it had said about the Nigerian girls kidnapped by the Boko Haram terror group, depicting them as welfare queens: 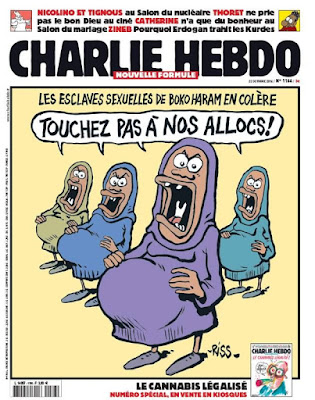 I wonder if Charlie Hebdo will be willing to do a “satirical” cartoon or three on the Paris attacks? Somehow I don’t think so!

Where was the BSWCBHO’s outrage at the bombing, for instance, of a Yemeni wedding just a few weeks ago by his Saudi Barbarian vassals where over a hundred and forty people were killed? Where was his outrage when his Zionazi owners were murdering thousands of Palestinians in Gaza last year? Did he even say a word about the victims of the Russian plane crash, if it indeed was by a bomb? Why is his “outrage” so selective?

Why didn’t Obama, Hollande and company consider allowing the rise of Islamic State as a device to overthrow Assad was “an outrageous attempt to terrorise innocent civilians [and] an attack on all of humanity and the universal values we share” ?

At this point it’s usually good form to state that one feels sorry for the people killed, who after all are innocents; but I don’t see that this need unnecessarily delay us. Consider it said, as long as you remember that tomorrow the names and identities of the individual dead and injured people will be forgotten – but the government of France, owing to whose negligence and/or active connivance (see above) the attacks occurred, will use them with all its might to pursue its own nefarious aims.

Remember these words of mine; remember them well:

Tomorrow, those innocent dead French people will be forgotten. They will have no names or faces. But they will be a number, a number which the criminal racist imperialist government of France will use as a shield to deflect criticism as it murders a thousand times as many innocents.

And, of course, I do not apologise for the above statements.

Thank you for your attention.

Update: I just love people who say that these attacks shouldn't be "politicised", as though they just appeared out of nowhere, or were some kind of natural phenomenon like a tsunami or an earthquake. And even those, of course, can and should be politicised sometimes in case of governmental negligence and/or inaction. The attacks, whoever carried them out, were of course, political acts, and the French governmental response is also a political act. How can anyone even discuss them without going into the causes why they occurred, and how can one go into the causes without coming up against the culpability of the French government in making them, by its own criminal actions, inevitable?
Posted by Bill the Butcher at 2:50:00 pm