Barbarians At The Gate

Anyone who’s aware of what’s going on in the world today – and that’s a shockingly tiny minority – will know that the Kingdom of Saudi Barbaria has just begun bombing Yemen. The official aim of this bombing is to force the Shia Houthi “rebels” to cede power to the “government” of “President” Abd Rabbuh Mansour Hadi. This Hadi, a former general, was “elected” in an Amerikastani-backed “election” in 2012 in which he was the only candidate. Late last year, Shia Houthi rebels from the far north of Yemen captured the capital, Sanaa, whereupon Hadi (who had allowed Amerikastani drones to bomb his people with impunity for years) resigned. Later, Hadi fled south to Aden, Yemen’s second city and the former capital of South Yemen. There he unresigned and declared himself the president of Yemen again.

Meanwhile, there has been a multicornered war going on in Yemen. On one side are the Houthi from the far north of Yemen. On another is what is known as Al Qaeda in the Arabian Peninsula (AQAP), allegedly the strongest and best-organised of all the al Qaeda franchises in the world.  It was allegedly to destroy AQAP that the Nobel-prize-winning President of the Imperialist States of Amerikastan, the darling of American liberals, Barack Hussein Obama, spent the last few years drone-bombing Yemeni civilians.  Yet it is the Houthi, who despise AQAP with a visceral hate, who are the only force actually fighting them.

Then a third faction are militias “loyal” to Hadi, who pretty much threw away their guns and evaporated like the morning dew as the Houthi stormed south towards Aden, whereupon Hadi escaped by sea to Saudi Barbaria. It seems he keeps on running away. And in the fourth corner are the only side for whom I have real sympathy, the South Yemen freedom movement, who are trying to break away and recreate the socialist, secular republic they had from 1967 to 1990. But in the current imbroglio they are the least important faction.

Now, the Houthi are Shia, but of a different sect from the ayatollahs of Iran, and there’s no evidence that Iran is aiding them in any way. Even if Iran wanted to, Yemen is geographically isolated from Iranian controlled territory, (as any look at a map would show) and it would be at least difficult to provide any substantial aid to the Houthi even if Iran wanted to. But facts, obviously, do not apply to the self-appointed rulers of the world and their vassals and proxies.

Of course, it should be obvious that Saudi Barbaria would not have attacked Yemen without Amerikastani approval, and the Imperialist States has admitted that it has given this approval. This ought to settle all doubts that anyone might have that the Imperialist States has no real desire at all to destroy al Qaeda. Since the Houthi would wipe out AQAP, and neither Hadi nor the Amerikastani drones have managed to do so, the only rational conclusion to be drawn is that the ISA and Saudi Barbaria want to rescue AQAP.

Let's go over this again:

Saudi Barbaria is invading Yemen to oust the Houthis, with Amerikastani approval. The Houthis are the only force in Yemen fighting Al Qaeda in the Arabian Peninsula (AQAP). Saudi Barbaria and Amerikastan are allegedly against AQAP, and Barack Hussein Obama has been drone-bombing Yemeni civilians for the last several years on the pretext of fighting AQAP. But now that the Houthis, who would destroy AQAP, have taken over Yemen, Amerikastan has ordered an invasion of the country to oust them.


Resolve this conundrum for me if you can, without coming to the conclusion that AQAP is an Amerikastani tool.

The reasons for this rescue are up to speculation, but may include:

1. The need for maintaining an “enemy” to justify occupying Yemen, an extremely strategically important nation in geographical terms, at the mouth of the Red Sea.

2. The need for maintaining a proxy army which can be used to attack secular Arab leaders like Bashar Assad of Syria. One should not forget that Barack Hussein Obama, Nobel Peace Prizident of the Imperialist States of Amerikastan, is still, to this day, arming and training so-called “moderate” Syrian rebels, all of whom are aligned with, or actually are, jihadists of various stripes.

That Saudi Barbaria can invade Yemen is unquestionable. It has a fairly large army, and claims to have massed 150 thousand men on the border to invade Yemen. If that is true, I would like to know just what forces it has to guard its other border, the one on the north against Iraq for instance. After all, according to Saudi Barbaria, it was going to build a border fortification against ISIS in Iraq. According to Wikipedia, the strength of the Saudi Barbarian Army is 150000. So that would leave precisely zero troops on the Iraq border, against ISIS...which is allegedly a grave threat to the House of Saud.

Resolve this conundrum for me if you can, without coming to the conclusion that ISIS is a Saudi Barbarian tool.

However, invading Yemen and holding on to Yemen are totally different things. Like their fellow qat addicts across the Red Sea, the Somalis, the Yemenis are fiercely independent people and will fight. They will fight in a manner the effete princes of the Saudi Barbarian army have never seen before. And the Barbarians know it, which is why they have accumulated a “coalition” of other Arab vassals of the Imperialist States. But those vassals all have strong internal fissures of their own, and their monarchs and dictators all sit on shaky thrones. They can’t strip themselves of protection just to please the obese parasites in palaces in Riyadh.

So let me stick out my neck and prophecy what is going to happen. After a bombing campaign of some duration, which will kill a lot of Yemeni civilians but do only limited damage to the Houthi military effort (primarily destroying the Yemeni air force and Houthi armour), Saudi Barbaria will launch a ground offensive. It will have to launch a ground offensive because aerial bombing alone cannot win wars, and never have won wars. This offensive will proceed relatively well in the open desert to the south but will soon get into real trouble in the mountainous north. Saudi Barbarian convoys will be ambushed in the mountains, cut off and massacred down to the last Wahhabi Barbarian. When the Barbarians attempt to helicopter in reinforcements, said helicopters will be picked off by Houthi with surface to air missiles. When the Barbarians retreat to fortified bases, said bases will be mortared and rocketed on a regular basis. Let alone conquer, the Barbarian hordes from Wahhabistan will not even be able to sleep.

Hadi will be “reinstated” but will control nothing, not even his own presidential compound (which will likely be in Aden; Sanaa is too close to Houthi territory for comfort). He will be as much a puppet of Saudi Barbaria as Mussolini was Hitler’s puppet from 1943 to 1945, and as universally despised. The real controller of the country – such as is under Hadi’s puppet “government” – will be whichever Saudi Barbarian prince is given the job. But the mounting numbers of dead and mangled Barbarians flooding back to Riyadh will prove a real, unmanageable danger to the House of Saud. As it is, the slums of Riyadh are filled to the brim with frustrated young men seething with anger against the dynasty. The obese parasites in the palaces have followed a dual strategy to stay in power: on the one hand they have attempted to pay off the people not to rebel, and on the other they have exported the disaffected youth to fight the jihad elsewhere, in Libya and Syria. But that is a policy with diminishing returns, and dead and maimed Barbarian troops are not something that will do the House of Saud any good.

So, within a very short time indeed, the Saudis are going to find themselves forced out of Yemen. At this juncture Amerikastan will be faced with a choice of another imperialist occupation or a strategic defeat. Amerikastan does not want strategic defeats. So it will occupy the country.

Not that that occupation will go any better than it did in Iraq, or Afghanistan, or elsewhere. Amerikastan can destroy Yemen beyond recovery, but it can't conquer it.

But, hey, that’s why they give out Nobel Peace Prizes these days, isn’t it? 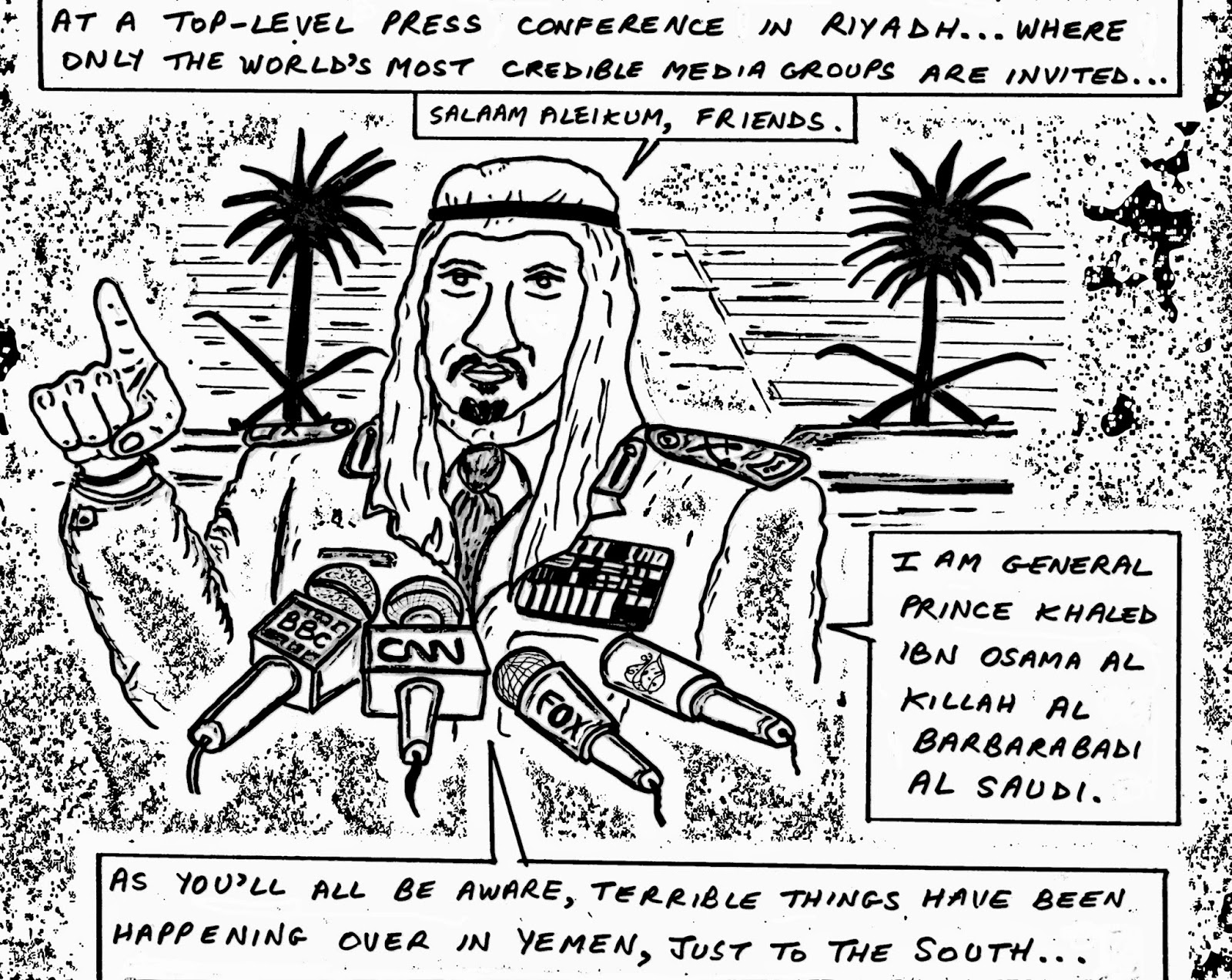 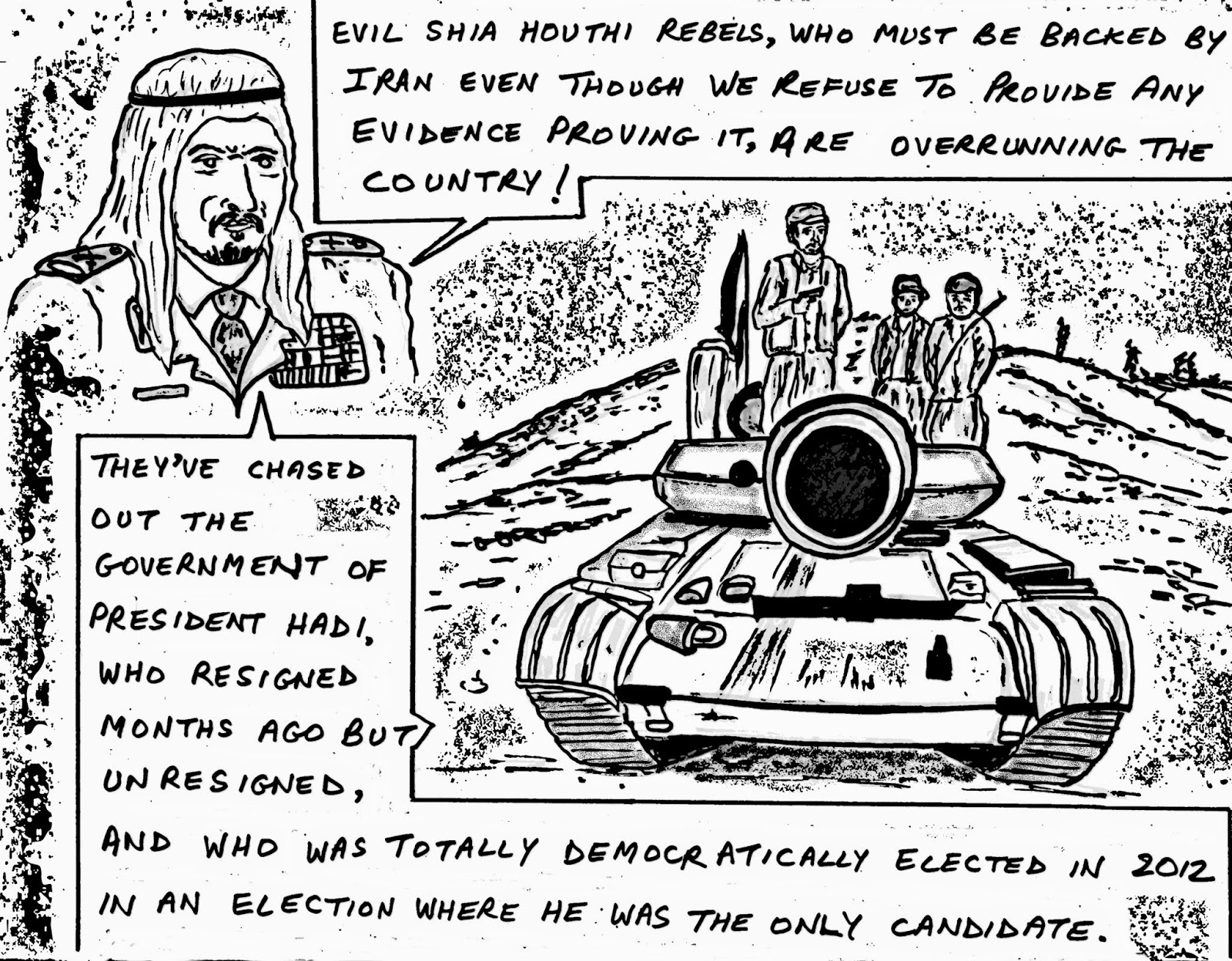 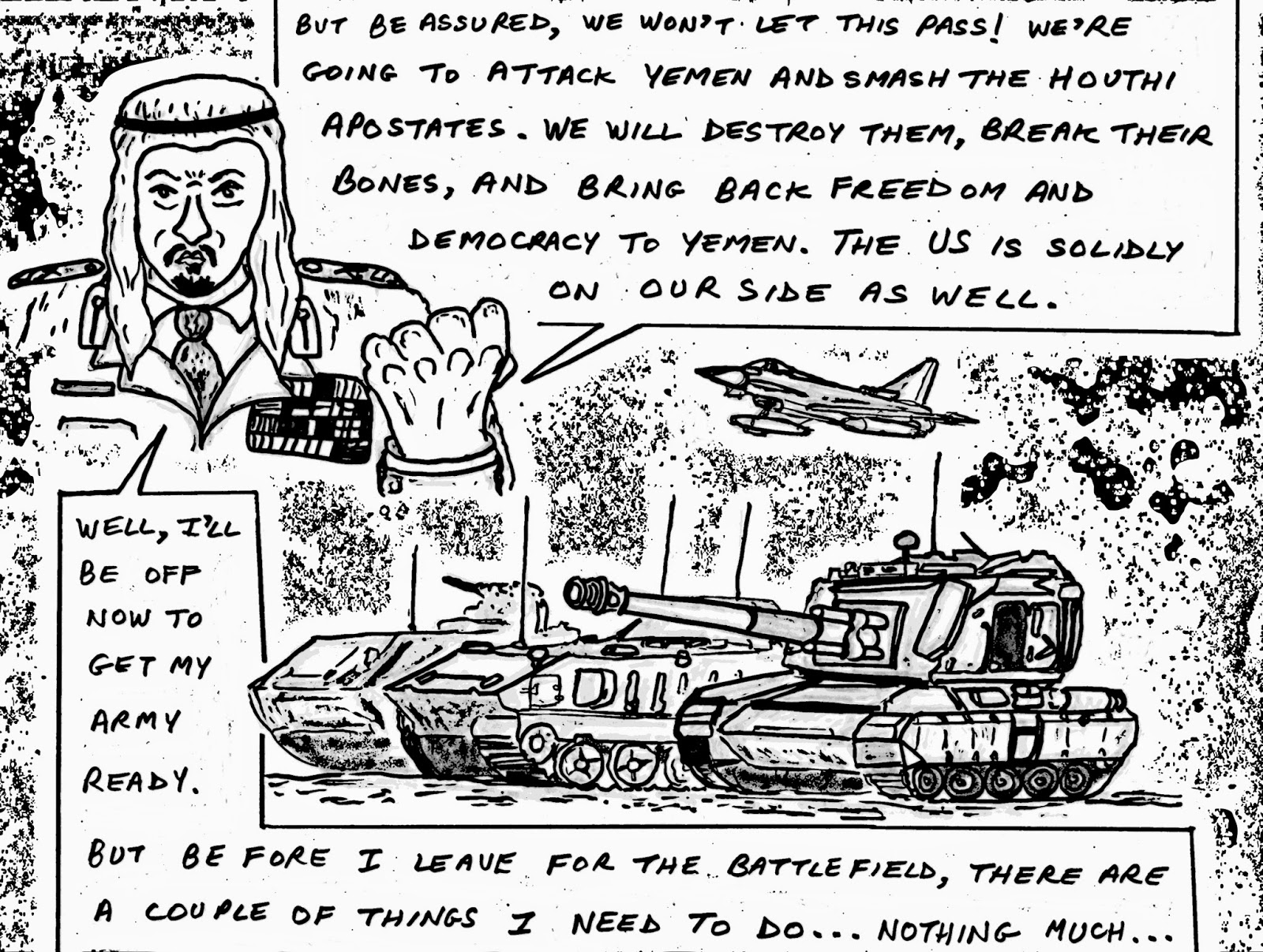 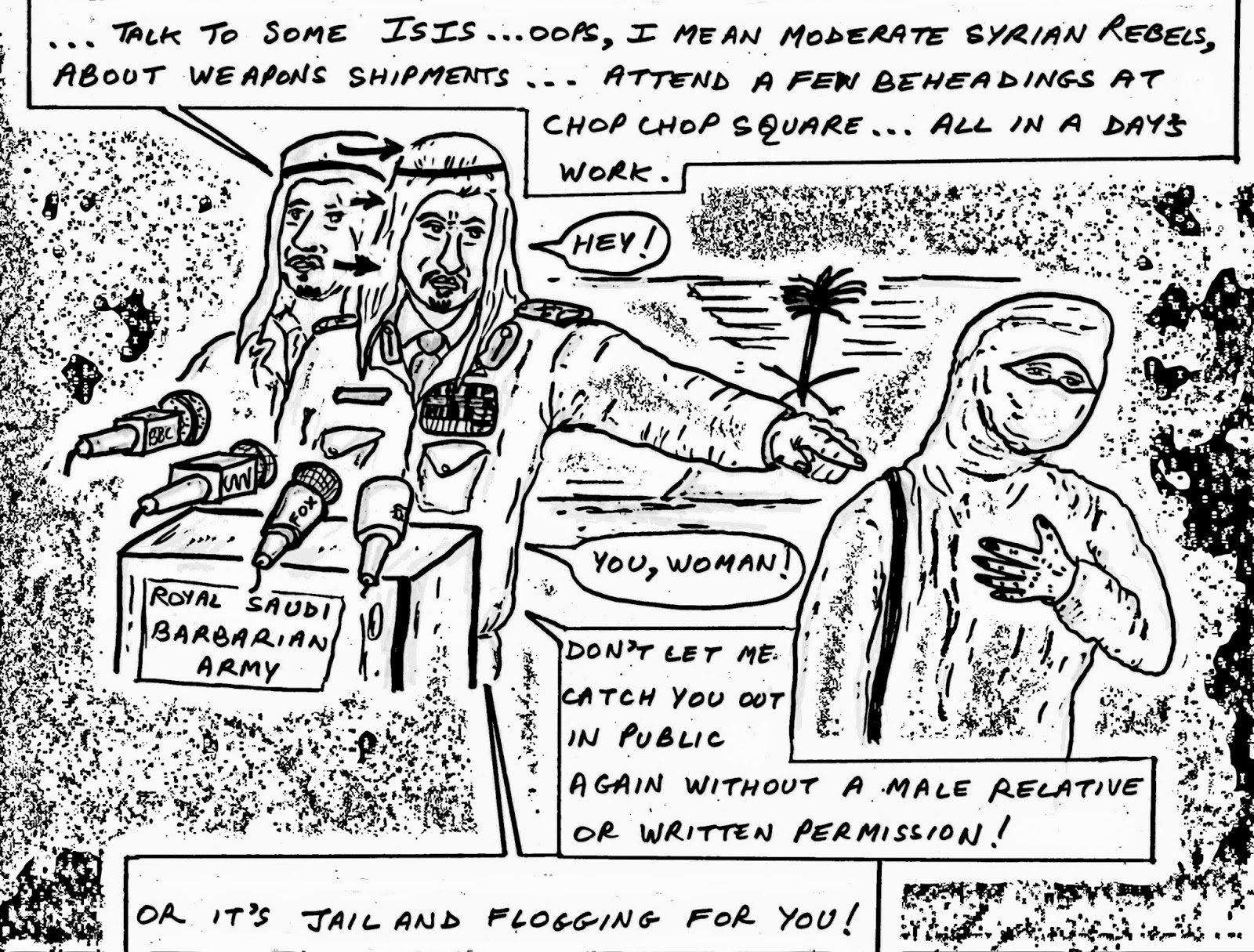