Burnt At The Stake

"Ay, but I fear you speak upon the rack. Where men enforcèd do speak anything."

I still remember clearly the first time I saw the Abu Ghraib torture photos. That was also the first time I ever visited antiwar.com, where a lot of them were published. I don’t remember feeling sickened or horrified as much as a kind of cold, steely rage. But then, in the aftermath of the invasion of Iraq, just about any action of the occupation in that country was guaranteed to be angering anyway.

As time went on and nobody could pretend any longer that Abu Ghraib was an “isolated incident”, I got faintly amused by the way the Empire’s media and officialdom kept wriggling around to avoid using the word “torture”. My personal favourite was “harsh treatment of prisoners”. You see, I have a book called The Knights of Bushido which enumerates, with diagrams, Japanese treatment of Allied prisoners of war during the period 1941-5. They had stress positions, beatings, simulated drowning, the lot – only nobody said they were “harsh treatment of prisoners”.

But then, as I say, being Exceptionalistan means never having to subscribe to the rules everyone else has to follow.

When, a few days ago, the much-celebrated Torture Report broke, I was of course not among those who was surprised. I was, frankly, quite cynical about it changing anything, and my cynicism has not been misplaced. In this case, the whole world knew the USA was torturing prisoners, illegally kidnapping people, paying its puppet dictators to torture them on its behalf, and so on. Only the particularly nauseating details of rectal “feedings” and the like were new. But I assumed that the average American, having the attention span of a mayfly with ADHD, would forget it in a week.

Going by internet commentary, even a week may have been too much to expect.

Insofar as the reactions I’ve seen have gone, barring a small minority of honest and principled people (Ted Rall and Cindy Sheehan come to mind), most American reactions (among those who deigned to react at all) fell into two categories, depending on their political stance:

“Torture doesn’t work. If it worked it would probably be fine, and anyway, it’s all over and done with, so nobody should make a fuss.” No surprises whom these people voted for.

“Torture is fine because 9/11”. No surprises whom those people voted for either.

Of course it doesn't work, but that's not the point. It doesn't have to work to fulfil its purpose, as I'll talk about in a moment. Also, of course it isn’t over, and everyone knows it, but as long as the money trail from the bribed dictators doesn’t lead back to the office occupied by a certain Nobel Peace Prize winning mass murderer and war criminal, nobody has a problem.

I was thinking of the kind of psychology, though, that would justify torturing anyone at all, if that is one isn’t a psychopath and isn’t personally doing the torturing. What would provoke this kind of support?

I can think of one – fear. Pure, unthinking, fear.

And that immediately put me in mind of another time when common citizens justified the torture and murder of harmless innocent people by the high and mighty – the witchcraft trials. They seemed to be identical in their essentials; a coalition of religious and secular rulers – in order to secure their own ends – spreads fear among quite ordinary, and abysmally ignorant, people about other people. Those others can then be quite openly deprived of property and liberty, tortured for confessions everyone knows to be fake, and then ceremonially murdered.

History repeats itself, and not necessarily as farce.

So here is my comment on the torture “scandal”. I chose the anonymous masked face of the Abu Ghraib detainee as the symbol for all the victims of the neo-witchhunts. I chose, also, to frame him against a background that suggests both a mushroom cloud and a crucifix. The reasons should be obvious enough for me not to have to explain.

Unusually, I painted this in acrylic, not water colour. It was the whim of the moment, but was a highly interesting experience. Acrylic is much easier than water colour to layer and provide texture. It is, however, extremely difficult to blend into subtle shades – hence the bright appearance, which I don’t necessarily like. I still think it works, and I shall be using both water colour and acrylic in future as the needs of the painting suggest themselves. 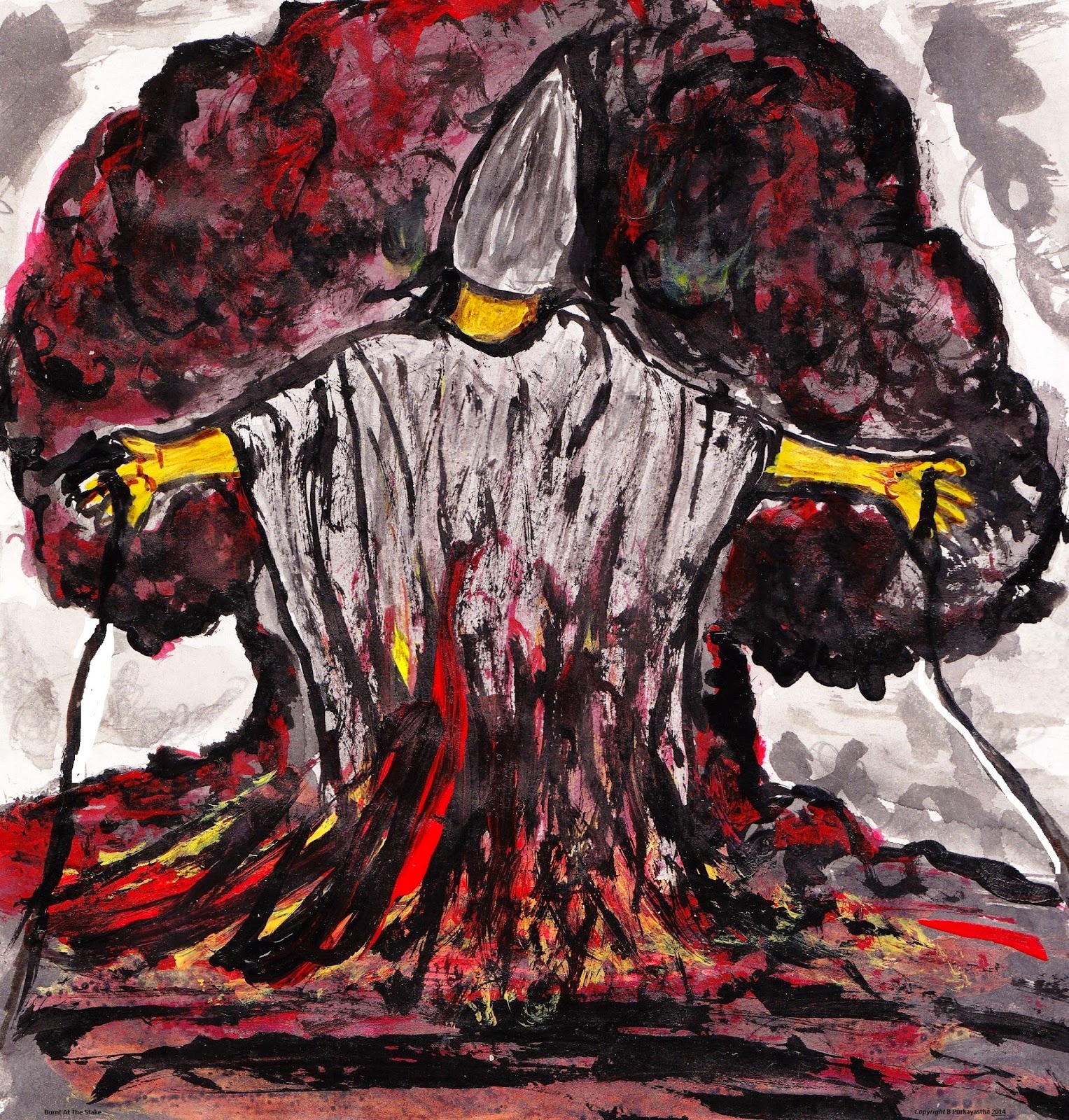 Title: Burnt at the Stake
Material: Acrylic on Paper
Copyright B Purkayastha 2014