As I’ve said elsewhere, TV in India is essentially a phenomenon which came into existence in 1982 when the Asian Games was held in Delhi. However, it was then (and would remain for years) restricted to a single channel, which was on the air only during the morning and evening. And colour programming was even rarer, so that the programme announcers would declare that so-and so-programme would be in colour.

Back in 1983, when I was twelve years old, TV was still such a novelty that people would sit staring at the screen watching mind-numbingly stupefying  programmes meant to “educate” farmers, give relationship advice (which always involved doing whatever one’s “elders” wanted) and so on. And when they outgrew that, and began looking for more watchable material, it wasn’t so easy to come by.

Sports, for instance. Sports programmes were restricted to a single half-hour programme on Sunday afternoons, called World of Sport, hosted by one Dr Narottam Puri, which basically showed capsules from the previous week’s sports highlights from around the world. Five minutes of European football, a monologue from Puri, two minutes of Formula One, another bit of talking from Puri, and so on. You get the idea.

“Western music”, as they called it, which meant everything from saccharine pop to hard rock, came around once a month or so, sometime around ten or eleven at night, and you took what you got, so one had to sit through Dschingis Khan and Boney M to get some decent material. And then you never really got to know a song because once it was played, it would be over and gone, and you’d have to wait months before it might be played again – if ever. I still have fragments of tunes in my head from those days, belonging to songs I liked but which I can’t look up now because I have no memory of who sang them or what the title was. Did you ever hear of something called Bilex Pistol Reu Reu?

Even for the lovers of Bollywood trash, the material was strictly rationed. They’d have a programme called Chitrahaar, which was a collection of Bollywood songs, three days a week, and Hindi films Thursday and Sunday evenings. There were Hindi soaps, of which I remember the names of only two at this distance in time – Hum Log and Yeh Jo Hai Zindagi (the latter, a surprisingly good sitcom in its early stages before it jumped the shark). And there were some foreign TV programmes.

Later on, in the mid-eighties, there would be three science programmes, David Attenborough’s The Living Planet, Jacques Cousteau’s Secrets of the Sea, and Carl Sagan’s Cosmos. But that would be some years later. In 1983 we didn’t have those.

There was a Japanese serial dubbed in English, which played once a month, called Giant Robot (and which the TV announcer usually called Gwiant Roba), about an eponymous giant robot which saved the world from the machinations of the alien Emperor Guillotine and his pet monsters. It was, of course, incredibly cheesy, but we knew no better. There was The Lucy Show, which was on once a week, and everyone reading this probably knows what that was about. And there was the news, which had not yet been (as it would be later in the eighties) turned into a propaganda machine whose sole purpose would be to promote the ruling party and its prime minister. But that was pretty much it.

In other words, if you wanted to watch something, you had no choice but to wait – days, or a week, or a month – for it to come around. And if there was a power failure or the transmission was down at the time, as it often was, then that was simply too bad. You took what you got and you were grateful for it.

And – you know what? We loved it. We’d wait, in keen anticipation, for the programmes we loved, and we’d sit through them savouring every second, burning them into our pre-teen memories, and then discuss them threadbare in school the next day. Each moment of those programmes was precious to us, simply because it was so rare.

And it was in these circumstances, back in 1983, that Doordarshan (Indian TV) decided to begin showing Star Trek.

Oh, we were no strangers to the concept of Star Trek. After all, we all read DC Comics, and the back cover would likely have a poster of the film. And there was the Starship Enterprise, blazing with lights in the midst of a sea of suns. We even knew the characters, because they’d be there below the ship’s picture – William Shatner as Kirk, Leonard Nimoy as Spock, George Takei as Sulu, and so on, we knew them all, though we hadn’t even seen the programme or had any idea what it was about. So we’d made up our own mental versions, and some of them were pretty damn good for twelve-year-old imaginations. 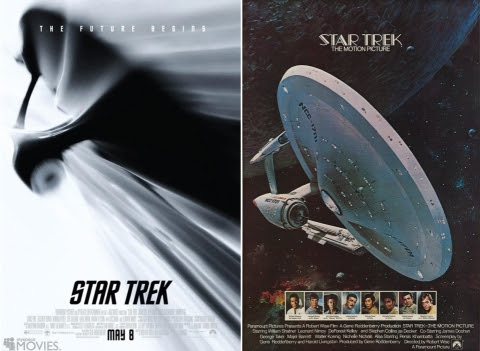 And so, when Star Trek started, we were caught, hook, line and sinker, before the first episode (I can even tell you that it was Mudd’s Women) aired at half past ten one Sunday morning.  That first episode didn’t go over too well with me, incidentally; I’m afraid I was anticipating something much closer to Star Wars than Star Trek. But, some later episodes did resonate better, and by late 1983 I was among the True Devotees, even though I was watching it on a black and white TV set with a faulty vertical hold.

How devoted was I? Let me put it this way: Star Trek played at 10:30am, Sunday morning. It was preceded by a Hindi variety programme called Aap Ke Liye, which began at half past nine. I wasn’t in the least bit interested in Aap Ke Liye, it bored me stiff; but I’d turn on the TV at half past nine and sit through the entire one hour of it, simply so I wouldn’t risk missing out on the bit that came before “Space, the final frontier. These are the voyages of the Starship Enterprise, on its five year mission...” It was well into 1984 before it finally occurred to me that I could, you know, skip Aap Ke Liye and simply keep an eye on the clock. I was that much of a devotee.

Hell, I was so much of a devotee that when I kept a diary for a while in 1985 the main weekly entries were analyses of the latest Trek episode. That was what mattered to me, more than anything else going on in my life. 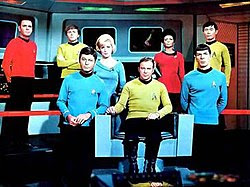 And I remember, to this day, my reaction to some of the episodes. Back then it was still the Cold War, and we were aware enough to scorn the Yangs and Coms. But we did love the episode where the Romulans fought the Enterprise (and lost, of course) – or the one where two identical bearded guys, one sane, one not; one from this universe, and another from an alternate antimatter one, who had to be kept apart lest they meet and annihilate each other and the universe. This was, of course, mindless nonsense, scientifically speaking, but we didn’t know of it back then, When the two ended up locked in a sort of halfway cube between the universes, we all felt atone with Kirk when he wondered, aloud, how it would be to spend eternity with a raving madman at one’s throat.

What happened? Well, time passed, we grew older, there were more programmes to choose from, and Star Trek ended its (re)run. I went through a bad personal phase in my life (which included three suicide attempts at age eighteen), went away to college, and pretty much everything changed. Including TV.

By the early 1990s, the single channel of the past was a fading memory. Cable had arrived, and programmes were already available round the clock; if you didn’t like what you were seeing, why, you simply flipped channels until you found what you wanted. And if you were bored with that, you looked for something else.

Sometime back then I remember the second version of Star Trek came up, the one with Picard, and I watched probably half an episode before quitting in disgust. I didn’t like this non-canonical stuff – hell, the Enterprise had changed shape. They’d even turned the famous “they boldly go where no man has gone before” into “no human”. What was this tripe? I wanted Kirk.

Sometime in the later 1990s, one of the satellite channels – for reasons best known to itself – decided to do a rerun of the original Trek. This was, incidentally, the first time I’d seen it in colour, not that it matters. I was glad. I was anticipating a TV series after a very long time. That was what mattered.

What mattered, also, is that once the first episode (which wasn’t Mudd’s Women, but still something I’d watched before) I could barely control my incredulity. That incredulity was aimed not at the programme, but at myself. Was this the sort of stuff I’d lived for in my teens? This nonsensical pseudo-science, these ludicrous plots, this pathetic excuse for acting? I stopped watching after twenty minutes, turned off the TV and walked away. I never watched any Star Trek again.

Today, I don’t own a TV, and haven’t in years. I don’t feel the need to own one ever again. And I’m pretty sure, if given the chance to watch Kirk and crew, I’d decline, and without thanks.

But I sometimes think of how we were, back then, when the world was opening before our eyes and a mediocre TV programme was something to look forward to with anticipatory glee. And, I feel almost sad for today’s kids.

Five hundred channels at their fingers, and as far as they’re concerned, there’s nothing on.

[* About the title of this post: that's what my grandma called Star Trek. Maybe she knew something I didn't.]