Hey, people. Among all the Sturm und Drang of the Norway massacre, and the drama over the debt ceiling in the US, the Rupert Murdoch scandal, etc, etc, have some of you forgotten that there’s a war going on in Libya, still? 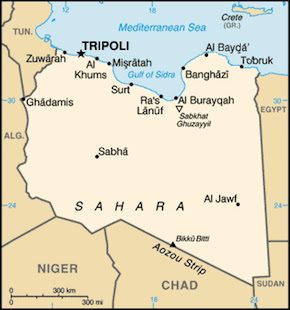 Well, if you have, don’t worry; I’m here to remind you.
In fact, so many interesting things have been going on in Libya that it’s probably time to sit back, take a deep breath, and take a look. 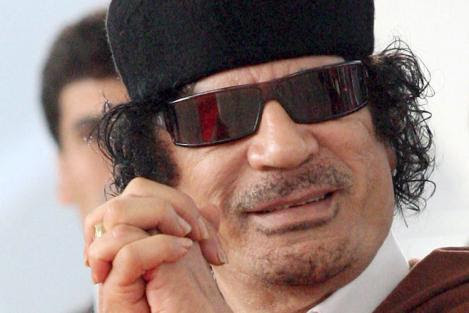 Before I go further, I’ll just save everyone some time and reveal myself as an ex-neutral in this conflict who has morphed into a full Gaddafi supporter. The reasons will be clear enough in the article, but I’ll say for now that I’d have backed him anyway from the moment the first NATO bomb fell, on the grounds that anyone who’s opposed by the Empire (or the British and French running dogs of imperialism governments, and whom, together, I have dubbed the Coalition of the Killing) can’t be all bad, just as anyone who has the Empire’s backing can’t possibly be on the side of the angels. Do not expect any neutrality in this piece; there will be none.
So, back to the main course.
(In this connection I’d like to share a memory from the 1990-91 Gulf War, where after bombing power stations and putting Baghdad in darkness, the Empire’s propaganda services claimed that this was done in order to “bring home the seriousness of the war to the Iraqi people.” It was as though the only consequence of bombing power stations would be that the people would have to use candles to light their homes, and heaters wouldn’t work, so that they’d have to suffer a smidgen of discomfort. I was just twenty then, and even I had wondered whether hospitals, food preservation facilities, water and sewage treatment plants, and other essentials for modern living, could operate without power. I’d come to the conclusion that the Empire didn’t really consider the people of Iraq human beings, something richly borne out by later developments. We’re seeing something of the same sort in Libya – with the Empire working through its NATO proxies in between taking a more direct role.)
“Several towns along the route [of the rebels’ advance] are now completely depopulated. One is Awaniya, a town of 15,000 people until the rebels captured it. The shops lining the highway in Awaniya were looted and are now littered with garbage. In some stores, even the shelves are missing. In the town itself, houses stand empty and ransacked, and some have been burned down. Other towns look similar. New houses are still burning days after the rebels took over, and trucks are removing anything that was overlooked during the initial looting: sacks of wheat as well as food and sheep.”
Some liberators, these glorious freedom fighters are!

This is what I wrote days before the bombing began, on my other blog site:
Libya is a tribal society, with strong tribal affinities. I don’t know how many of you have any experience with tribal people, but as someone who’s lived all his life in close proximity with them, I can tell you something: the primary, indeed only, allegiance of a tribal person is to his tribe, and not to his “nation”, usually a woolly concept to him. And, also, tribes compete intensely against one another for power and influence. Gaddafi – along with several other Arab despots – has ruled not necessarily only by brutality, but by successfully playing off one tribe against another and walking a tightrope of competing tribal aspirations. Remove that factor, and what you have is going to be intertribal conflict, with erstwhile allies at each other’s throat.
…
Then, remember what I said about the Libyan “opposition” being far from unified. The Empire is going to have to choose whom to prop up when it becomes an occupying force, because, make no mistake, intervention will have to end in occupation. Libya has too much oil wealth for anything else to happen; and the various tribes and factions will be at each other’s throat as soon as their object of common hatred, if that is Gaddafi, leaves the scene. And then, whichever faction the Empire supports will be the Enemy of everyone else. We have seen this before, haven’t we?

I’m not privy to the thought processes of the “interventionists”, of course, but it seems to me somewhat unlikely that they don’t realise all that. So all this talk of intervention is either a hollow smoke-screen…or they mean it. If they mean it, they are willing to go through it all the way down the slippery slope of full-scale intervention and occupation, including fighting the inevitable guerrilla war that will follow. Nobody likes foreign occupiers, especially ones who are all too transparently there only to control the oil supplies.

In that case, we will once again see the naked face of the Empire, which uses a manufactured “outrage” (where is this outrage when Yemeni, Iraqi and Bahraini “allied” dictators use military force to kill unarmed demonstrators, including nerve gas?) to start another war which will be paid for in blood by poverty draftees on one side and Ay-rab ragheads on the other.
…
I know that in this case the French and the British are taking the lead in the anti-Libya Crusade, but let's remember that the Empire has before, in Yugoslavia, been drawn in against its own first impulses, as a result of the machinations of its vassals. And never forget the final result: a bandit regime in Kosovo which trades human organs for profit.
So far, I’ve seen no reason to change one word of my prognostications; and I don’t think I shall have to.
Therefore, since things on the ground are emphatically not going well for the Empire, why do they persist in the war? One the one hand, it may be the paralysis of inertia and the unwillingness to lose face. After all, can a nation which still styles itself “Great” Britain, or another (France) which still acts as though it’s the occupying power in its ex-colonies, admit they couldn’t defeat a tinpot dictator they’ve been demonising for decades? And when they run out of precision guided munitions and the like, they can always holler to the Americans for aid. But, of course, even they must be aware that the bombing campaign is not working. They’re also arming and training the rebels on the ground, but let me repeat something I’d said about that – remember how the missiles and training the Afghan mujahideen were given against the Soviets were turned against their former paymasters in short order once the Russians left? How do you prevent that from happening again?
So, the only conclusion I can come to, to explain why this war is still going on, is that eventually there is going to be a Coalition of the Killing invasion on the ground. This will likely happen when the “rebels” can advance no further, and the CoK will then claim that there has to be a ground invasion or else all the gains by the “forces of democracy” (to whom they are committed)will be lost. Of course, once the invasion force is in place, they will have to stay there as an occupation force in order to “protect the people of Libya” from the civil war between the various rebel factions that will inevitably follow. And I have predicted this from the moment the first bomb fell.
In this, it’s more than likely that (as in Iraq) the money made by handing over Libya’s oil resources lock, stock and stinker sinker to Imperium-owned companies won’t compensate for the costs of maintaining an occupation, but the fact is also that the companies’ financial bottomline is all that matters, and the actual poverty draftees who have to fight the Ayrab ragheads on the ground can go right to hell as far as anyone’s concerned.
In the long run, though, I believe that this whole exercise might have some positive impact:
In the meantime, as I’ve said before, we live in interesting times.