Death of Another Dream

One of the most depressing things about growing older is that the things I used to take for granted would absolutely, certainly, happen turn out to be impossible.
For instance, I grew up reading Golden Age science fiction, and among my possessions is a book called Forbidden Planets, a collection of stories revolving around the idea of first landings on other planets, both within this system and orbiting some far and distant star. And, before them, there were the old – and, in retrospect fairly hilarious – tales of the late nineteenth and early twentieth centuries.
Oh, you know those stories. Those are the tales where a couple of professors with faintly Germanic-sounding names construct a spaceship in their backyard, much to the amusement of the village yokels. And, after many chapters of describing the professors’ arguing over theories of spaceflight, etc, and much to the consternation of those selfsame yokels, the spaceship takes to the skies, to deliver its professorial load to some planet – Venus, let’s say – with breathable air, pleasant blue skies, and luscious purple fruit hanging from the trees.
So Professor von Stopperfossen and Doktor von Schellinghausen climb out of their spaceship, and wander through the trees hungrily eyeing the luscious purple fruit. And just as they pluck a couple and are about to bite into them, a beautiful humanoid girl comes running up to them, and in English (albeit perhaps of a pidgin variety) informs them that the fruit are poisonous, and that she is Princess Cosmica of the Kingdom of Venus, and that she wants the help of these two gods, descended from heaven in their flaming chariot, to –
All right, you know those stories.
Anyway, the point is that I grew up believing that someday, probably well within my lifetime, people would be standing on the surface of another habitable planet, living out the science fiction stories printed in the pages before me. I actually, you know, believed that would happen.
The first knocks that belief took were a good long time ago, when I was still in my teens and I first examined seriously the fact that nothing could travel faster than light. What about all those FTL ships, screaming across galaxies at velocities that would put them on the other side of the Milky Way in a day? What about bloody Star Trek, the USS Enterprise and warp speed?

Where did the future go?
Now, the problems of interstellar travel – or, hell, with current technologies, travel across this tiny solar system – are well enough known that I don’t have to go over them here. I’ll just say that even if we put most of our effort into it, a reasonable method of transport to another planet – one that could take a sufficiently large payload of passengers and cargo sufficiently quickly at a sufficiently low energy expenditure – will most likely never be possible when the distances stretch across stellar systems.
Of course, we aren’t even trying. As Arthur C Clarke said, the Vietnam War could have paid for a permanent Moon programme as depicted in 2001: A Space Odyssey. We haven’t even been back to the Moon since 1973, but the people who control the funding of space research prefer instead to spend trillions on weapons systems that can never have any practical use while getting their asses handed to them by illiterate villagers in turbans and flip-flops. Meanwhile, as energy resources approach their inevitable end, our window of opportunity to strike out across space is beginning to close. I very much doubt if serious space research can survive the first half of this century.
But even if it were possible to strike across space, should it be done? Is it a desirable thing?
About the same time as I was still reeling from the speed of light as a limiting factor, I read an interview with Carl Sagan where the professor was talking about the dangers of microbial contamination from another planet. I’d paused a bit, I remember, my teenage brow actually furrowing. Microbial...contamination? How on earth could that happen, because the SF stories I was reading never mentioned a single damned microbe? Could it?
As I grew older and read more, I realised all too well that, yes, it could.
There are microbes called extremophiles. They live in places where one would think no life was possible, around underwater volcanic vents, or deep below the Antarctic ice. These are creatures which seem to indicate that if life is possible somewhere, then it will exist. If the conditions inside an intergalactic dust cloud are right for some kind of life to emerge, we probably shouldn’t be all that surprised if it does emerge.
So, you can imagine NASA blasting off a spaceship to Europa, to gather a few glasses of the water of the seas beneath the ice crust of that moon; and it brings back, along with its samples, a load of stowaway bacteria, at least some of which are capable of survival under earthly conditions...and breeding.
Do you get the idea?
And it’s not just microbes either. Imagine something that can be crushed, broiled, frozen to close to absolute zero, dried out, poisoned, starved, put in the vacuum and cosmic radiation bombardment of space, and still survive. Uh, I’m not talking about different organisms here, one capable of being boiled, another desiccated, yet another poisoned. I’m talking about one animal which can withstand all of these conditions.
Actually, that’s not even science fiction. These animals exist, right here on earth. They’re called tardigrades, and are members of the Phylum Tardigrada.[1] 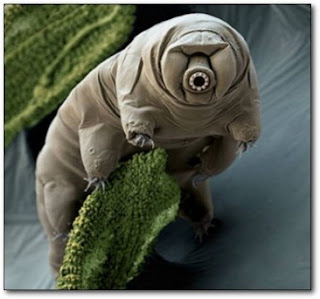 This is a tardigrade
Now, it’s hardly likely that a miniature eight-legged moss-dwelling herbivore has evolved specifically to withstand vacuum and radiation in space. It’s even less likely that the tardigrades are aliens dropped off from a UFO dispatched to us from a far distant star. What’s probable is that their adaptations to extreme conditions here on earth allow them to resist conditions like vacuum, to which they would never, under normal circumstances, be exposed.
You know where I’m going with this, don’t you? If tardigrades on earth can be – just by the accident of evolution – resistant to the rigours of space travel, sans spaceship, then  what prevents the denizens of some distant planet from being able to do precisely the same thing?
Answer: nothing.
The consequences of this are more alarming the more you think of it. We humans already have an unenviable record of exterminating other organisms. Some we exterminate directly, whether deliberately or as a by-product of our other activities. Some – perhaps more – we exterminate indirectly; these are the creatures killed off by the creatures we take along with us, rats and cats and dogs, syphilis and smallpox and bubonic plague.
Recently, I came across a report[2] that Gliese 581d, a planet orbiting a red dwarf star just twenty light years away – that means pretty much next door – has a stable atmosphere, comfortable temperatures, and a surface covered in liquid water. As I’ve said before, where there’s a possibility of life, we can assume that there is a likelihood of life. For the moment let’s just say that Gliese 581d may have life and see where that leads us.

Click on this for an enlarged view
Now, with current technologies, which aren’t likely to be bettered unless the powers that be smell some kind of profits for the military-industrial complex, it would take some three hundred thousand years to get there. If we merely send a probe at a fair fraction of the speed of light, that would still take upwards of a century, and any information it sends back would take another twenty years, at the speed of light, to reach us.
Of course, it would be extremely interesting to know what the probe finds. If it does discover life, then we do have the confirmation that we aren’t alone in the Universe. Most thinking people already believe this, but there’s a big difference between belief and proof. If there’s life on Gliese 581d, religions, especially, will take hard knocks, as will several kinds of philosophy which hold humanity on some kind of pedestal. But if it doesn’t find life, then we shall be reminded again how precious life on this planet is, and how we ought to safeguard and not destroy it.
The problem is that we probably will never know. Here’s why:
Suppose we send a probe there in 2015; it will get there by, let’s say, 2120, even if it doesn’t fail on the way; its first reports will reach us in 2140. By that time we might well be living in a post-apocalyptic world, said apocalypse having been brought about by a combination of global warming and the implosion of fossil fuels, and we might not even be able to detect the signals any longer, let alone interpret them.
And just suppose we do detect and interpret them, and discover there is life on Gliese 581d. What do we do about it? Send an invasion fleet, to do unto them before they do unto us, as many of the dreadful pulp SF stories of the 1940s and 50s insisted? Send an embassy? A scientific mission?  What?
Now, assume that we did send some kind of probe. Can we completely and absolutely sterilise that probe of all earth microbes, as well as any other organisms? If we don’t, what effect will those bacteria, those viruses, those protozoans...those tardigrades...have on the native life?
When the embassy ship we send finally gets there to Gliese 581d, will it find a world wiped free of its native life by bacteria from earth? Will we have actually, if inadvertently, done unto them as we did not wish to be done unto?
This is an important question. Just how much do we have a right to destroy? Can we risk devastating an alien ecology, even if it has no technological or even intelligent life, in the quest for knowledge? For the time being, let us set aside corporate greed, a la Avatar, or military aggrandisement, like Starship Troopers. Can we wipe out an alien world just to find out what makes it tick?
I’ll say that the answer is no. We do not have that right, and we never shall.
So, it comes back to the starting point. Those SF stories of walking on alien worlds snacking on purple fruit, while voluptuous princesses call you god and implore you to help them, aren’t going to happen. Those stories of lone explorers trudging across barren wastes while vast organisms lurch beneath the methane ice sheets aren’t going to happen. Nor should they.
All the same, I still feel sad about it.
After all, it was a dream.
Sources:
[1] http://en.wikipedia.org/wiki/Tardigrade
[2] http://dvice.com/archives/2011/05/gliese-581d-con.php
Posted by Bill the Butcher at 7:43:00 pm