Guardian At The Gate

There is a person called Russell Bonner Bentley.

Originally from Texas, after Obama's Nazis overthrew the Ukrainian government in 2014, he went to the newly established Donetsk People’s Republic to fight the Ukranazis, where he went by the nom de guerre of what else but..."Texas". A few weeks ago,  he sent me this fan mail,  which,  as he is one of my personal heroes, made me rather happy,  I can tell you.

Hello,
My name is Russell "Texas" Bentley. I came to Donetsk on December 7th, 2014, to join the defense forces, fight against nazis like my Grandfather did, and to help the good people of Donbass. I served from December 2014 to September 2015 with Essence of Time combat unit in VOSTOK and in XAH spetsnaz, as a front line combat soldier, as an anti-sniper and RPG gunner. In 2017, I spent the summer (4 months) at a front line position on the Avdeevka Front as a combat soldier in the Essence of Time military police unit.
Since 2015, I have also been working as an accredited (by DPR) war correspondent and as the vice-president of Donbass Human Aid, an accredited (by the USA) 501(c)3 charity. We have so far delivered over $100,000 worth of human aid to the DPR, concentrating on kids and those directly affected by the war.  My journalism has been attacked by the BBC, Texas Monthly, Atlantic Council and numerous other ukrop and western propagandists. It has cost me tens of thousands of dollars and supporters, and that is no exaggeration. And the worst has been that so-called "progressive" and "pro-Russian" so-called "journalists" have hit me as hard as the pro- ukrop nazis have. And I am talking specifically about Raevsky.
Fort Russ News was publishing my writings back then, as was The Greanville Post. Raevsky had already attacked FRN on several occasions before I wrote a critique of an article of his, and another by the quisling Vladimir Golstein in January 2018.
I think my criticism was honest, on point and legit, but you can see for yourself whether you think so HERE.  After the article, I was the subject of a whisper campaign by Raevsky along the lines of "Him or me." Many of the chickenshits and suckbutts who style themselves as "alt-progressive" bent over and chose to bow to Raevsky's advice to not read "hit pieces" by lowly punks like me. I re-posted his article widely, along with my response, "Why Raevsky's call to Ignore Hit Pieces Must be Read by Everyone".
I've been blackballed by pretty much every "alt-news" site ever since. But I still had my FB, VK, Fort Russ and my own website,
www.russelltexasbentley.com. back in July 2020, my website manager, Jozsef Vass, who lives in Canada, locked me out of my own site. Around the same time, Matthew Ehret, (who also happens to live in Canada) took control of FRN and locked out all the former contributors, including founder Joaquin Flores, the brilliant Tom Winter, Drake Lazarus, Ron West and many others. This month, my FB account was deleted by FB, after 12 years and with over 6,000 friends and followers. That's life in the info war...
My Youtube channel is still working, but I wake up every morning wondering if it still is.
Anyway, if you've read this far, thanks for indulging my tale of woe. Enough of that. The reason I am writing is to say that I really appreciate your wisdom, insight, honesty and courage, and that Raevsky is actually a much bigger asshole than even you may know. And BTW, I also wrote a short critique of Orlov's genius solution, but it has had a very limited circulation. Suffice to say, you and I see it the same, but I do take it more personally. Because I DO live here and have spilled my own blood defending this land. So your Neptune/Raevsky series really hit home with me, Brother. Sincerely, thanks alot.
In conclusion, max respect from one Warrior Poet to another, and it does take one to know one. Best regards from the DPR.
Good luck to all good people, may God protect the innocent, and may the rest of us get everything we deserve.
Russell "Texas" Bentley
_________________________________
He attached this photo of his from the Battle Of Donetsk Airport of 2014-15: 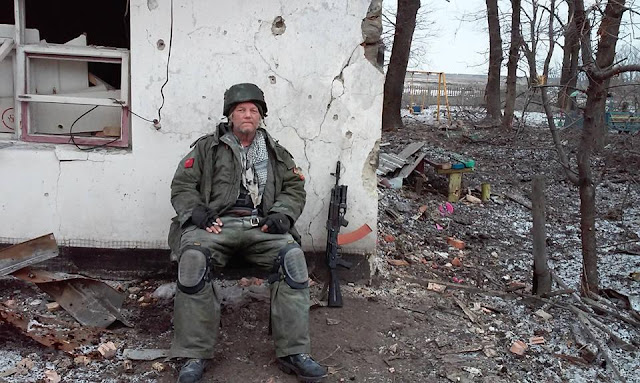 From yesterday,  as I write this,  Bentley is no longer an Amerikastani.  He's become a new citizen of the Russian Federation. In congratulations, and in appreciation of his efforts, I - with his full approval - drew a cartoon based on his photo. The message is what he wanted on it. 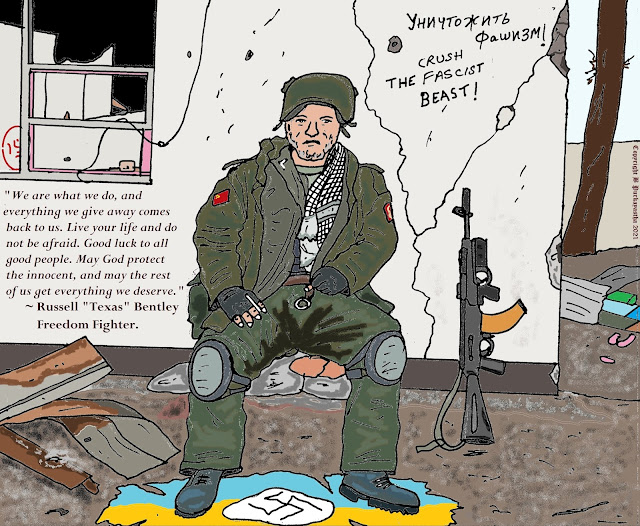 I am concentrating on writing my next novel,  which is why cartoons and short fiction are on temporary hiatus. They'll be back.
Posted by Bill the Butcher at 4:10:00 pm