I don’t know how long I’ve been away, or where I’ve been. I just know that I’m coming back again.

The darkness has been indescribable, darkness greater by far than the pure black of intergalactic space, darkness so intense that it’s as though it’s swallowed the universe; but I’m rising, and the darkness is starting to fade. From nightmare black to grey,  and from grey to a pearly bluish translucence, like, I think, the moon through a thick fog.

It’s been so long since I’ve seen the moon, or fog, that I can’t be really sure, not that it matters. What matters is that I’m able to see and hear, to be, again. In whatever form being means at this time.

I can see outlines now, darker ghosts of shadow in the pearl-light, condensing slowly into trees and streets and buildings. They aren’t familiar, but I can’t expect that. I don’t know how long I’ve been away, and in any case I’ve never seen them under these circumstances.

I’ve never seen anything under these particular circumstances.

The last shreds of the darkness, thick as clutching fingers, fall away reluctantly from my limbs as I step through into the pearl-light, where shadows are merely shadows, not like...not like the place I left. Whatever happens, I am not going back there again.

I drift along the streets, looking at the cars and houses, separated from me just by the pearl-light. I look as I drift, seeking, not knowing if there’s anything to find.

I’m a silent shadow among silent shadows, drifting. I’m in no hurry. I can’t hurry even if I wanted to. I have no idea where I am, where to go. All I know is what I’m looking for: you.

I don’t know if there’s you still left to find. But if you’re there, I’ll find you.  It’s been longer than I can endure since I’ve been with you. Maybe it’s my yearning that set me free.

I look into windows as I pass, seeing lives go on their slow ways. Curtains and blinds are nothing to me.

Here. In this room, there’s a boy, sitting at a desk, looking down at a school book and not seeing a word that’s on the pages. His eyes are full of pain and loneliness, and I know, as he does, that he’s going to kill himself and is just gathering the courage to do it. At that age, life is cheap and it doesn’t need all that much courage. I can see his ghost, hovering over his shoulder, beseeching, gibbering, but I can’t tell whether it’s begging him to do it...or not to.

I know exactly what he’s going through. I’ve been there.

There’s nothing I can do, no way I can help him. I move on.

There’s the family at dinner, father, mother, daughter. Father and mother stiff, glaring across the table at each other; daughter cringing, looking down at her plate, trying to pretend the world around her doesn’t exist; desperately hoping they won’t fight, not tonight. In two years she won’t be able to take it anymore and will run away, to become a model or an actress; and in two more years after that she’ll be selling her body in a town on the other side of the country, spreading her legs to stay alive and telling herself that she’s really doing the same thing as she would in a marriage, no difference, really. Her ghost hunches over her, its hands over its face.

There’s nothing I can do to help her, either. Her, or the ghost.

Up from an upper window, I catch the stench of disease. I could climb up the air, to look in, but I know what I’d see; and there’s nothing I can do there, either, so I pass on by.

Here, the houses give way on side of the street, the angular hulk of a factory rising into the pearl-light. It’s a corpse, this factory, its sheds and machines long since stilled, when the city grew and flowed around it and cut it off from its food and drink, the raw materials that were its sustenance, the company that ran it long since defunct, the workers sent away. And yet even it has its ghosts, and I can see them, still waiting for the noise and smoke and the hum of machinery, that’s gone for good and won’t return.

Then I see them – five of them, standing behind a broken wall, where they think they’re in the deepest shadow, invisible; and they would be, except for the pearl-light. I can see them, the beer bottles lying at their feet, the alcohol in their eyes. They’re waiting, nerving themselves up, their ghosts over their heads, straining forwards eagerly; and as I drift closer, I see what they’re waiting for.

The woman is hurrying along the street on the opposite side, her heels clicking on the pavement. I can’t see what she looks like, how old she is, but it doesn’t matter, all I need to do is look at her ghost, and I know she’s tired, beyond tired; her feet are aching, she wants to go home, kick off her shoes and lie down. That’s all she wants to do.

Perhaps there’s something I can do, in this instant, the here and now. I drift between them, her ghost and theirs. If they could see me now, perhaps they would see a giant, towering shadow, with eyes like the infinite blackness between the stars. They can’t, of course, but their ghosts know I’m there, waver, and shrink back; and they step back further away, uneasy and suddenly near-terrified.

The streets look a little familiar, buildings thinning out, trees replacing some of the press of houses. Perhaps I will find you here, where those three buildings rise, side by side, like identical boxes set on end. I’ll come up the stairs and to your door, the door I used to know well, once, the door you’d opened for me to proudly show me your new home. I’ll pass through the door easily, though it’ll be locked; what good are doors to such as me? And then I’ll find you, maybe sitting on your bed working at your laptop. I’ll come up beside you, and I’ll try to touch you: your hair, through which I once ran my fingers, and which will be shot through with silver now, after all the time that’s gone;  the line of your cheek, which I had once felt on mine, and which time has marked, too, with lines of tiredness, and, perhaps, though I hope not, of suffering.

You won’t see me, you won’t feel me, but your ghost will; your ghost will know I’m there, and perhaps you’ll look up sharply, turn around to glance about the room. Perhaps you’ll get off the bed and go to the window, standing there for a minute or two in your T shirt with the blobby yellow dinosaur, your grey shorts and rubber sandals, looking out at the night; and then, because there’s nothing there to see, you’ll shake your head and return to your work. I could scream but you wouldn’t hear me; I could try and shake you by the shoulder, and you wouldn’t know. But your ghost will.

And later, when you’re just sliding into sleep, that’s when I’ll come into you, into your dreams. I’ll walk through your home, and stand next to you as you’re working or cooking or watching the telly; and you’ll finally know I’m there, and you’ll be surprised for a moment, because all this time you thought I’d gone.

But, sooner or later, you’ll awake, and you’ll lie in bed staring into the darkness, and though I’ll be there, right beside you, you won’t know it. You’ll lie in bed, and perhaps you’ll take the mobile phone and call a friend, someone whom you can call at this hour, and you’ll talk a while so you can get back to sleep again. And I’ll be banished.

But not forever, not when I’ve found you, when your ghost is merged with me; tomorrow night, or the day after, I’ll be back again. You’ll be walking through the dream-rooms of the night, and then I’ll be there, so naturally, so easily, you’ll hardly notice when I’ve come, and then you’ll beg me not to go away again.

It may be cruel, of me, but it’s all the existence I have now, all the life that’s left to me, in the pearl-light.

Let the darkness wait, it can wait forever, or even till tomorrow.

And tomorrow will never come. 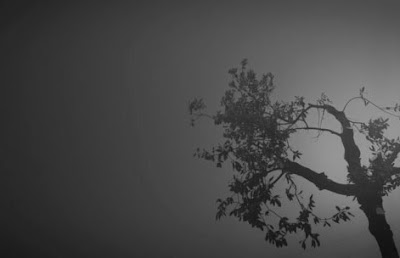