A Candidacy of Dummies

On the face of it, India seems to have an incredibly vibrant democracy.

After all, look at the candidate line up for just about any election, especially in the constituencies in the boondocks where you’d think nobody would give a damn about voting anyway, especially since the outcome makes no difference in their lives. You’d think there would be a couple of candidates, and that they’d be from the two parties which would swap power every election.

Especially in the boondocks in Indian elections, the candidate list for any constituency is often huge. You’ll have thirty or forty people vying for a seat. A few of them will be from the main political parties – say three or five or eight of them. Some of them will have serious hopes of winning. The rest will be simply so the political party concerned can remind people it exists.

The rest will be the independents, candidates from no party whatever, who are contesting the elections on their own bat. Once in a long while one of them might be a major politician expelled from one of the parties, who’s cashing in on his own power base by making an independent attempt to storm the citadels. But who are the rest?

Businessmen, hoping to win power and change laws to suit their businesses? Once upon a time that might have been the answer, but these days the major parties are so much in the pocket of Big Business that the moneybags can simply buy the laws that suit them. Or, if they want, they can join a party of their choice and get given a seat to contest. Most political parties these days consider how much money a candidate can invest in his own election before deciding on its candidates.

After all, it is an investment, because these days politics is completely business. I don’t think I need to point this out, do I?

So just who are the others, all those candidates who fill up the ranks, not one of whom has a chance to win? Idealists, doing their bit for democracy?

Are you out of your mind?

Let me talk about a hypothetical scenario.

Suppose, now, you’re a candidate planning to take part in an election. There are two main candidates who have a chance, because each one of them is backed by one of the main parties, and you’re one of them. Right?

The problem is, the electorate is split down the middle. Which way the election will go, by your reckoning, is impossible to predict as things stand. But – with all the money at stake, including developmental funds to be siphoned off, bribes from corporations to change laws to suit them, and the like – you don’t want to leave it to chance. You’ll try to make it a sure thing as far as possible by sabotaging the Other Guy’s chances.

How do you go about doing that?

One thing you’ll most certainly do is accuse the Other Guy of corruption and malfeasance, but that won’t take you far, for two excellent reasons: first, he will accuse you right back of the same thing, and with good reason, since unless you’re corrupt to the core you wouldn’t manage to get to be a candidate from a major party in any case. And, secondly, the electorate is probably far too jaded to give a damn about corruption anyway.

So what else can you do?

You fill the field with dummy candidates.

A dummy candidate – the term is a completely mainstream one in India, because the practice is so widespread – is one who is not expected to win; in fact, he’s not meant under any circumstances to win. His value lies in draining away votes which would otherwise more likely than not go to your opponent.

Suppose, for example, the Other Guy has a fairly common name, say Mahendra Kumar or Harjeet Singh or Mohammad Abdullah. Since money is no object – you’re backed by a Big Party, which is in turn funded by Big Business, as well as your own slush funds, dammit – you can afford to hire several other people called Mahendra Kumar or Harjeet Singh or Mohammad Abdullah to stand in the election. The proliferation of candidates of the same name will often confuse enough voters to cost your opponent a significant chunk of his support.

This is such a routine practice in North India that one common way politicians counter it is by adding a nickname to their real name, so Mahendra Kumar might become Mahendra Kumar “Bitta” to distinguish him from all the other Mahendra Kumars in the field.

Or, let’s say the constituency has a mix of voters of two different caste groups. You’re of one caste, your opponent of another. To this day in Indian elections, caste groups tend to vote for candidates from their own castes, rather than look for merits of either the candidate or the party. So you know that your caste will almost entirely vote for you while the other lot will vote against you.

So this is what you do: you hire multiple candidates of the other caste to stand, ostensibly, against you. What they are actually doing, of course, is standing against the other guy, because every vote they get is a vote which wouldn’t have come to you anyway – but now he doesn’t get it either.

And it’s all completely legitimate! There’s not a single thing actually illegal about any of this since there's no way to prove anything.

This works elsewhere as well. As I’ve pointed out many times before, except for the far left and the extreme right, most Indian political parties are family fiefdoms, privately owned business properties passed on from father to son, and occasionally daughter. To this end, internal democracy in the parties is nonexistent. But occasionally there are rumbles of revolt in the ranks, especially when the going hasn’t been good in recent elections. There are hints that the Top Family’s position might be under threat.

Then it’s time for a quick sham election in the party, with some guaranteed loser being put up against the representative of the Top Family, and the latter’s position being overwhelmingly cemented in the ensuing wipeout of the "opponent". It’s quite likely that the “challenger” won’t even vote for himself. The function of the dummy, in this case, is to act as a sacrificial goat to head off any serious challenge.

That’s how much a farce these things are. And, yet, it’s totally legit. Again.

Now just look at the World’s Indispensable Nation, the Bringer of Freedom and Democracy worldwide, where each election sees a Chosen One opposed by a deliberately selected kook whose only purpose is to scare fence sitters into voting for the Lesser Evil – the Chosen One, in other words. And where a so-called “left-wing” politician who voted to send weapons and money to help Zionistan bomb Gaza farcically “challenges” a known war criminal and Chosen One for the right to stand against the Unelectable Kook in 2016, and you know that we’ve done it again.

Like so much we’ve given the world, from the zero to tandoori chicken, India has exported the Dummy Candidate as well. 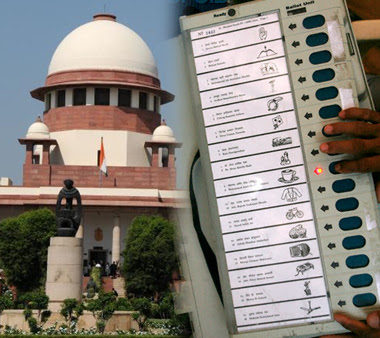