City At The End Of Time

The lone individual in the unfamiliar city has been an object of fascination to me for a long time, and this fascination reflected in my stories. I wrote this story specifically for this painting.


In the City in evening, the lights shine brightly and the air is filled with excitement at the close of the day.

He walks slowly out of the hotel, into the cold night air, the city once familiar now grown alien and strange. The last time he had been here, these buildings had been ruins, the air filled with smoke, and the only sounds had been the explosion of shells not so far away. The walls had trembled from the shells and broken glass glittered in the light of the fires. That was the last day of the war, the day when the peace treaty had been signed.

Tonight he walks through the streets and he looks at the faces of the people, and he does not know what to feel. But tonight is an important night. Tonight, he will meet the enemy again, face to face.

Someone pushes past him, a thin young man who is in too much of a hurry, yet who finds time enough to throw a scowl over a shoulder as he goes. There are far too many people on the pavement, and in the streets the traffic is far too heavy, and the lights are far too bright.

He sees an alley off to one side and turns into it. He knows this alley, or at least he knew it once. It had been one of their strongpoints, back then, on the last day of the war. Back then they had fortified it with sandbags and concrete slabs, and covered it with machine guns.

Now it’s lined with dustbins and the smell of decomposing garbage.

A group of teenagers is in the shadows, beside the hulking shape of a parked truck, passing around a cigarette between them, turn when they hear him coming, and glare at him balefully. One or two of them step forward, belligerent, looking for trouble. Then they see something in his face, perhaps,  and quietly fall back. He is not the kind of trouble they want tonight. He can feel their eyes on his back as he walks on.

Here, at this corner, had been the place where he had helped a woman give birth. The woman had been caught in the shelling, and hidden in a building instead of being able to flee to the other side, where she would not be the enemy. But she had been over eight months pregnant, and the stress had brought on her labour. He had heard her muffled cries of agony, and knelt between her spread thighs as she had pushed a new life into the world. Mortar bombs had arced overhead as he, with absolutely no idea if he were doing the right thing, had held the little girl and handed her to the new mother. Afterwards he had helped her back into the shelter of the broken building, where she was at least safe from anything but a direct hit.

After the ceasefire he’d helped her to cross the line. He had never seen her again.

Here the alley gives on to a main street, and there are people, but not so many as before – less rush, less noise. Here a woman – a girl, really, surely not more than sixteen or seventeen, and underdressed for the weather – looks at him and turns away. He’s too old, or something else maybe. He wonders what is wrong with him that even the thuggish teen gangs and the hookers avoid him.

The girl he had helped be born would be just about as old as the half-dressed young woman just now. He turns to look, as though he might recognise any resemblance, but she’s already gone.

Not too far away is the restaurant where the enemy is waiting. He recognises the man instantly, though they’ve never met in real life; the internet makes sharing photographs and stories easy.  They had been on opposite sides of the lines back then, and might easily have shot at each other.

The man would have had a good reason to shoot at him. He was an intruder, and the man was from the city itself. But that was then.

Now they are on the same side. They’re still enemies, but enemies united, enemies of the same things. And they have a lot to talk about.

His family hadn’t wanted him to come, to confront a man who had shot, maybe, at him in person.

The restaurant fills and empties, and fills again. The manager comes, a professional smile struggling with a scowl.

“If you have nothing else to order, gentlemen...”

He leaves the enemy at the restaurant door. They smile and shake hands, and then hug, awkwardly, two elderly men wrapping arms around each other.

“Yes. Do you really want to see...all this? Was all of it worth this?”

He looks at the enemy and glances around. A car goes roaring past, too quickly, and he hears music blasting from speakers.

Then he sees a child running down the pavement, a child who trips and begins to fall, and the enemy moves fast, his hands scooping the kid up before she could fall face-first into the pavement, and returning her to her parents, all in one smooth movement. The child’s face scrunches, ready to cry.

He looks at the enemy and the enemy looks back at him.

“You know,” he says, “it might have been worth living on for this time, after all.”

Then he walks back to the hotel, and on the way he gives all the money he has on him to a beggar with one leg. 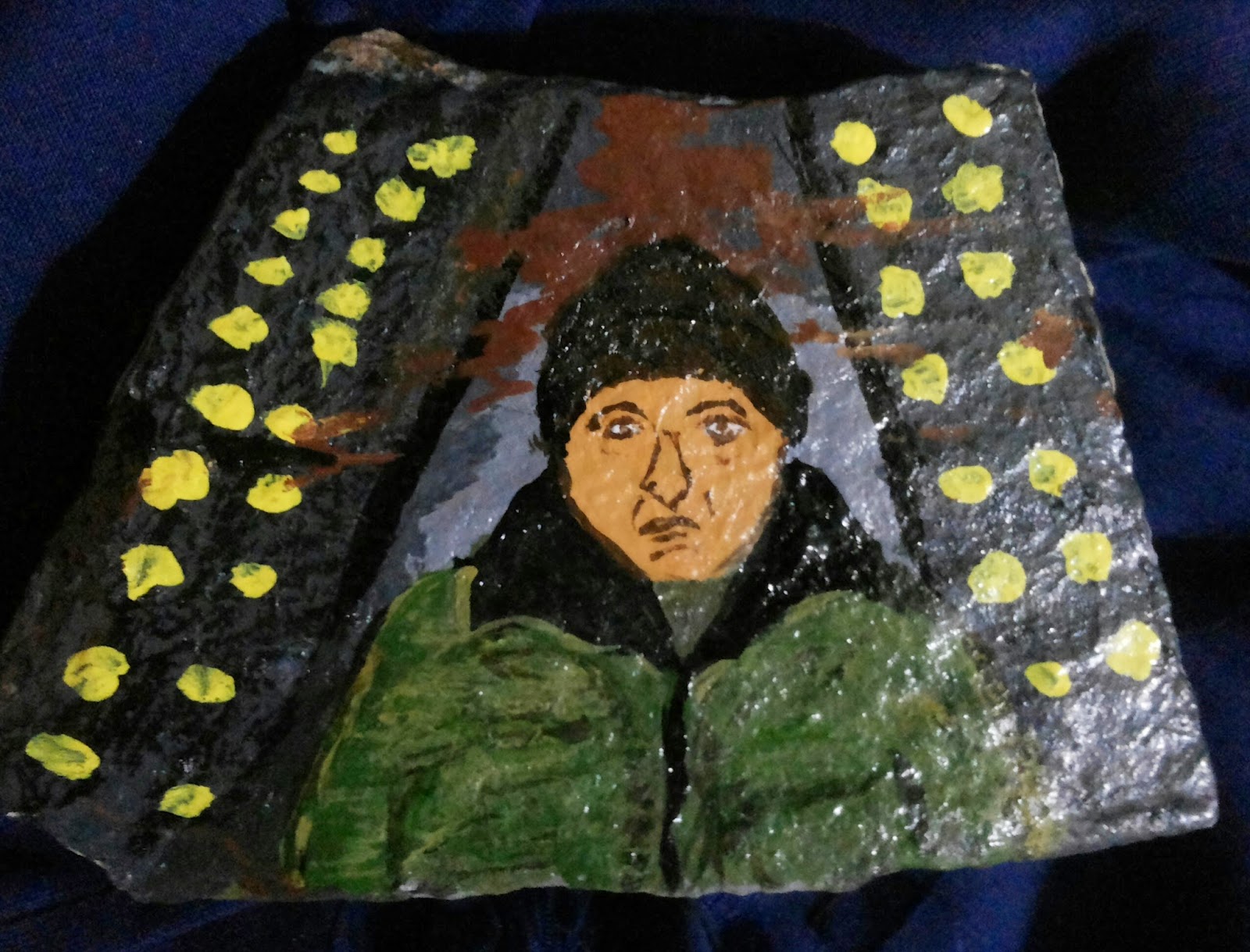 Title: City At The End of Time
Material: Acrylic on Stone
Copyright B Purkayastha 2015