“Haven’t you managed anything yet?” the cockatrice squawked, flapping up to the ceiling and down again. “He’ll be here any moment!”

I cast a harried look at her. “I’m trying my best, but it’s not easy.”

“Nothing’s ever easy for you,” she snorted, her tail swishing dangerously. “Call yourself a magician and you can’t even fight a simple knight. What you’ll do if you’re ever faced with a demon or a warlock boggles the imagination.”

“He’s not just a simple knight,” I snapped, pouring some powdered wyvern scale into my cauldron and stirring vigorously. “He has fought dragons.”

“And the dragons won, going by the scorch marks on his armour. Yet he’ll be here any moment, and you still won’t know what to do about him.”

I added a pinch of musk of Behemoth to the cauldron, and waited to see what would happen. Nothing happened. “How far is he anyway?”

The cockatrice flapped up to the ceiling and the high window there. “I can just see him on the other side of the moat. He’s about to cross.”

“Do you think I should raise the drawbridge, assuming I could get the mechanism to work?”

“What good would that do? The moat’s dry and mostly filled in anyway.”

This was, regrettably, true. I had neglected the castle’s defences. But how could I have known?

I must have uttered this last bit aloud, or else the cockatrice was becoming dangerously adept at reading minds. “You’re supposed to be a magician, right?” she snapped her beak. “Magicians are supposed to be able to tell the future!”

“Just you try and become a magician for a day and see,” I said, desperately snatching a bottle at random from my shelf and emptying it into the cauldron. The acrid smell of molten hippogriff hoof canker filled the cellar and set both the cockatrice and me to coughing. When we’d done coughing I saw the mixture in the cauldron had turned a deep violet colour.

“What do you suppose this is?” I asked, swirling it around with my mixing rod. The mixing rod promptly began to transform into a bunch of flowers.

“Roses,” the cockatrice said, poking her head over my shoulder, a habit I particularly detest. “I hate roses. Especially roses that particular lurid shade of violet.”

“Maybe he’s just coming here for a love charm,” I suggested. “Or maybe he’s ill and wants a cure...”

“Come off it. Last night he was at the inn, boasting that he would come over today and destroy you. You know that as well as I do.”

“He might have been lying,” I said feebly, adding a couple of pinches of dried blood of phoenix to the violet liquid. It went a dark maroon and began to bubble. “He might have merely been boasting to the people.”

“He’s got his sword out,” the cockatrice observed. “Ruddy great sword it is, too,” she added helpfully, after another trip to the window. “Looks like it could cut off a man’s head, easy.”

“Why not you? You’re a magician, and a knight can’t be a real knight unless he’s either gone on a crusade, killed a dragon, or beaten a magician. You know what happened to the crusades, the dragons beat him, and as for the magicians, you’re obviously the only one he knows he can beat.” She clacked her beak again. “He knows, I said.”

“I know what you said.” The maroon liquid was still bubbling, but doing precious little else. A distant hammering started, on the castle’s main door. “Is that him now?”

“Of course. He’ll break down the door in a moment. Do you think you could do a vanishing spell so he can’t find the way down to this cellar?”

“I would,” I said, throwing things at random from bottles and phials into the cauldron. “I’d do it with pleasure...if I could remember how to prepare a vanishing spell.”

“I should have known.” The cockatrice sighed loudly as the door overhead gave way with a splintering crash. We both heard the knight’s armoured feet tread heavily on the castle’s stone floor. “So what, exactly, are you going to do?”

“Can’t you do anything?” I asked, emptying a whole packet of a yellow powder I hadn’t used for so long that I’d forgotten its name into the cauldron. “You’re a cockatrice, damn it. You’re supposed to be able to turn him into stone.”

“They all have anti-cockatrice glasses these days,” she said. “They just order them online. Everyone knows that.”

There was a pause as we listened to the sound of the knight’s footsteps on the stone floor. The door at the top of the stairs began to shiver from blows from an armoured fist.

“So, what now?” the cockatrice asked casually.

“I’ll think of something,” I said. The shelf of ingredients was bare, and the cauldron filled with a thick gluey substance that oozed like jelly. I began hunting through my pockets on the off chance that there might be something more to add to the pot. “How’s that door holding up?”

“It isn’t,” she replied, just as the thing gave way with a crash. We heard the knight’s boots on the stairs, coming down. Scrabbling in my pocket, I found a tiny bottle of something or other. Without even looking, I threw it into the cauldron. The room filled with a terrible stench.

“What’s that smell?” the knight boomed, his voice echoing. “Did you go and die on me, magician?”

I held my tongue. If he was stupid enough to keep talking then there was perhaps a chance that he would say something that would give me a handle. I just prudently moved to the other side of the cauldron.

“I hope you haven’t gone and died on me,” the knight roared, stomping heavily on the stairs. “I’ve sworn to kill you, so you’d better be there for me to kill you.” He appeared round the last bend of the stairs, a hulking figure so wrapped in armour plates he could hardly move. “Where are you, damn it?” he inquired.

He peered at me over the cauldron. “Oh, there you are...” he said uncertainly. He raised the huge sword and swiped it erratically through the air. It didn’t even come close. “Come out and fight, damn you!”

I stayed where I was. He stumbled a couple of steps across the cellar floor, waving the sword around. It really began to get a little threatening.

“Stop brandishing that,” I told him. “You might do someone an injury.”

He turned towards the sound of my voice, and began making his way around the cauldron. I quickly skipped round it, keeping it between us. “Put that down, I said!”

“Where the hell are you?” he complained. “Stop hiding, you coward.”

“Right here,” I said, skipping further around the pot. “Here, Sir Knight. Don’t you want to kill me or something?”

Fortunately it was a big cauldron.

The sword fell, too, but outside the pot, and it didn’t cut anyone. Not even a nick.

“You realise,” the cockatrice said, “that you didn’t beat him at all.”

“Yes,” I admitted ruefully. “He was dead drunk.”

“That, and the stink. Besides, he wasn’t expecting a magician who was a...” The cockatrice peered into the cauldron. “How’s the soup coming along?”

“Probably not a good idea, at your age,” the cockatrice agreed. “With all that alcohol sloshing around inside him, and you not yet of drinking age.”

I giggled. “I think he was expecting someone old and ugly.”

“Oh, you’ll be old and ugly someday.” The cockatrice dipped her beak in the cauldron. “Hmmm...”

“How is it?” I asked anxiously.

“Not bad,” she said judiciously. “You might make a cook someday, my girl.” 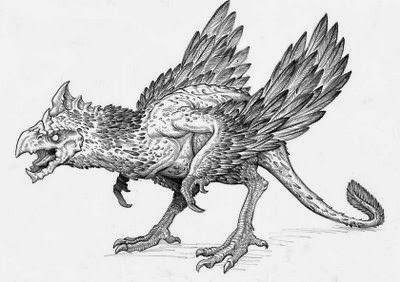