What gods may come

Some days ago I’d written an article about the edge of the Universe. Oh, you’ve read that article? Good. In case you didn’t, you can correct the omission here.

I was reminded of that article when I came across someone commenting (on the response column of a comic strip) that a particular creature looked as though it came from another world or perhaps from “another dimension”. Obviously, this raised my pedantic hackles immediately.

Before I explain why it raised my pedantic hackles, let me repeat something I said in that article:

In order to understand what I’m going to talk about next, let’s imagine that we live in a two-dimensional world. We have length and breadth only – there’s no such thing as height. We crawl around this world, seeing each other only as lines and points depending on the perspective.

So, ladies and gentlemen, if we were to have a fourth-dimensional creature drop into our universe, he or she wouldn’t look like this: 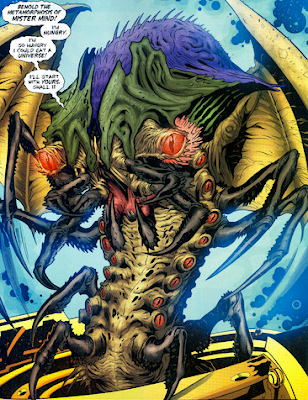 No, he or she would look like a 3-D cross-section which would be constantly changing shape as it passed through our universe. Correct?

This has interesting consequences if you think about it. Suppose we were back in our 2D world and you wanted to lock up your money safely. All you have to do is construct a box or oblong around it, and it would be safe. However, the third dimensional fingertip-owner could just, you know, reach into your oblong from the top – which is, of course, imperceptible to you – and pluck your money into his third dimension. So a fourth dimensional creature could, you know, just get into Fort Knox and take care of all the gold in there.

A fourth dimensional creature could also do much nastier stuff to you. It could pluck you out of the 3D world, turn you over, and put you back again; just like one could pick up a piece of paper, turn it over and put it down. Why would this be nasty? It would be nasty because every single molecule in your body would be turned the wrong way round; and for many enzymes and other complex molecules, the right- or left-handedness of the atomic arrangement is extremely important (they are called laevo- and dextro- depending on their orientation).

If a 4D creature did this to you, then you’d soon be dead because your biochemistry would cease to work in a way that allowed you to survive in the 3D world you’d inhabited before being turned around.

So, let’s imagine - since we can't see - what a 4 D creature would be like. It would present as a shape-changing 3D cross section which could appear out of nowhere, take things out of – or put things into – our discernible space, or, if it felt like, just kill us by turning us the wrong way around.

Shapeshifter, assassin, thief, bestower of boons – why, do you know what it would be as far as we’re concerned?