If you are against the destruction of the environment
To enrich Big Business
To turn forests into charcoal and slag
And tear the heart from the earth’s dark breast
Then you are a Maoist.

If you’re filled with rage
When villagers are killed, houses burnt
By the police and the state’s death squads
Looted, raped, locked away without charge,
You are a Maoist.

If you think crony capitalism is evil
And sucks the blood of the poor
If you think that riches never trickle down
And the poor get only poorer
You are a Maoist.

If you think an inflow of foreign money
Is not the way to prosperity for all –
If you point out that the British first came as merchants
And that when they pay you, they buy you
Then you are a Maoist.

If you are against competitive corruption
Of the politicians, and say
That they are all on the same side – theirs, only
And that they only work for themselves
Then you are a Maoist.

If you think democracy is rule for the people, by the people
And does not mean just holding elections, and numbers of seats won
Alliances made, promises betrayed –
If you believe the system has failed, was meant to fail
You are a Maoist.

If your ears ring to the screams of tortured people
In the prisons, trampled under police boots
If you refuse to be diverted by the latest cricket scores
The latest political shadow-play
You are a Maoist.

If you think land should not be taken from peasants
To give to companies to build factories, at gunpoint,
If you think a thousand cars are not worth one drop of blood
One dammed, murdered river, one trickling tear
You are a Maoist.

If you think the government should serve the people
And not stock market figures,
If you think “growth” for the sake of “growth”
Is not a worthy goal for anyone
You are a Maoist.

If you point out the hypocrisy, and the lies
The fairy tales told by the media,
If you mock the Muddle Class
And hold up a mirror for it to see
You are a Maoist.

You don’t have to take up a gun
Or even throw a stone.
You just have to think for yourself,
And have the courage to speak out.
And even if you never heard of Mao 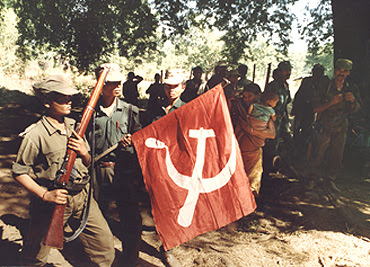