“Gentlemen,” said the Admiral, “you must understand that what we are about to hear is absolutely top secret.”

He glared round the big table, his bloodshot eyes and the braid on his uniform complementing the red-gold colours of the Imperial Space Fleet on the wall behind him.

“Our defeat at the hands...I mean tentacles...of the unspeakable !ulrq, as you all know, has been so comprehensive that we had to sue for peace – even though we are in every way superior to those slimy, cowardly, craven, misbegotten things.”

One of the junior officers cleared his throat, as though about to speak, but fell prudently silent when the Admiral glared at him. The room was so silent that one might have heard a drop of sweat plink on the polished table.

“Before I go into the reasons for the actual defeat,” the Admiral continued, “I should tell you a little about the background of the battle, because except for my immediate staff, none of you will have been told more about it than was released to the media and the masses.”

He turned and pressed a button. The wall behind him lit up with a space map marked in lines of dull green and blazing yellow.

“As you all know, we have been – for years now – expanding our Empire in the direction of the realms of the unspeakable !ulrq.” Everyone waited politely until he had stopped coughing. “Sooner or later, of course, this would mean that we would have to either crush them and take over their territories, or else...” he shuddered “...negotiate with them over a common border.”

Everyone present shuddered in sympathy at the thought of negotiating with the unspeakable !ulrq.

“Since the second option was of course out of the question, and since the !ulrq are obviously far inferior to us in every way possible, we decided to defeat them in battle.” The room filled with appreciative murmurs, which gradually tailed off into silence. “It shouldn't have been difficult, because being a peaceful race, they hardly have a space navy worth mentioning. But, still, we made preparations, including constructing our mighty new battle fleet, of which there has been so much reported in the media.”

With another touch of a button, he threw up an image on the screen. “Here is one of our top secret new battleships. You will of course have heard that they were under construction, but I can wager you've never seen one before.

"As you can see, it’s not the sort of metal and ceramic ship you're used to. No, it's got wings to fly on currents of charged particles, it's got faceted eyes to see throughout the spectrum, and it’s even got ears to listen to radio waves in space. In fact, it’s not so much a ship as an organic, spacefaring, living creature.”

He indicated a thin, nervous-looking man in a white coat. “Professor Mensaman there is the genius behind the idea. He and his team decided that living, intelligent ships which could repair and reproduce themselves were the weapon of the future. Of course, the whole thing was incredibly expensive, but it was worth the effort. Imagine having a self-replicating, self-repairing fleet of sentient warships at one’s beck and call. Who could oppose us then?”

“What do the ships eat?” someone at the back asked. “They need food, don’t they?”

“They eat anything.” The Admiral waved a hand dismissively. “We carried enough organic matter to feed them on the way out, and once there, they could be fed on all the corpses of the unspeakable !ulrq after the battle was over. Food wasn’t a problem.”

“What about the crew?” the officer who had cleared his throat asked. “There was a crew, wasn’t there? Or have we gone all autonomous already?”

The Admiral shot him a dirty look. “Of course, we selected and trained the crew too. They were the very best, and all volunteers. Naturally, they were only concerned with fighting, not with running the ships. The ships ran themselves.”

Everyone murmured further appreciation, glancing approvingly at the man in the white coat. “Once we had the fleet ready, we just needed a casus belli. As you remember, that wasn’t hard to arrange. We just waited for a meteor that we knew was going to strike one of our outer colony worlds, and declared that it was sent as a weapon by the unspeakable !ulrq. All it cost us were the lives of three thousand expendable colonists.” Everyone nodded, except the officer who had cleared his throat. The Admiral made a mental note to have him demoted to Ordinary Sailor and set to scrubbing toilets as soon as the meeting was over.

“So, we had our fleet and our war. We decided to strike straight for the !ulrq home planet, Spatterloo, so-called because the unspeakable !ulrq spatter their...uh, never mind. If everything had gone according to plans, in one fell blow, we’d destroy their centre of government and reduce them to slavery. The war would be over before it had even really begun.” He glared at the rows of officers before him. “We decided, reluctantly, that we had to preserve the !ulrq as a species because only they could mine their hellholes of planets for resources for us, and because our commercial sponsors...” he bowed respectfully at a group of men in dark business suits seated at a table across the room “...insisted that they be kept alive as a captive market for our products.

“The fleet set out, and until the midpoint of the voyage everything seemed to be going well. At least, the reports from the ships and from Rear Admiral Gutsnglory spoke of absolutely perfect performance, with not the slightest glitch, even from the newest equipment. And the ships were happy, too.”

“They had been neutered for the duration of the voyage,” the Professor murmured, “so that there wasn’t any sexual jealousy to cause trouble.”

The Admiral ignored him completely. “The last message we had from the Rear Admiral was that the ships were in orbit around Spatterloo, had apparently not been detected, and were preparing to launch weapons. And that was all.”

He looked around at the assembled officers. Nobody said anything, not even the throat clearer.

“We made attempts to communicate with them, of course. We tried everything we could. But there was no response. Our distance sensors found the ships – yes, they were in orbit, right around Spatterloo – but there was not the slightest response from them. Nor did we see any of the mushroom clouds rising over the planet that we were expecting.

“We finally had to admit,” the Admiral continued eventually, “that we’d been defeated. In some horrible, mysterious way, the unspeakable !ulrq - despite their racial and military inferiority - had vanquished our wonderful, sentient, living fleet and our valiant sailors. We had been so badly beaten that we had to make peace and agree to negotiate.” He paused to allow all present to gasp in horror. “But we didn’t know how we had been defeated, and the !ulrq didn’t say. In fact, they didn’t even admit there had been a battle at all.

“So we convened a top-secret inquiry, chaired by myself, the Professor here, and of course representatives from our sponsors.” He bowed again, reverently, to the men in the suits. “The Professor will present our findings.”

Twitching with nervousness, the Professor leaned forward to speak. “Since we had no clue at all about what had happened, and since the !ulrq wouldn’t give us permission to check, we had to send a spy telescope as close to Spatterloo as we could, to take a look. It found the ships still in orbit, as we’d expected, but surrounded by clouds of tiny dots. And when checked in full magnification, we realised that those dots were bodies. To be more precise, they were the corpses of the crew.”

There were more gasps of horror. “Of course,” the professor went on, “after that it all became clear. It’s a wonder that we’d never thought of it before.

“As the Admiral told you, the !ulrq live under conditions which make their planets, to us, hellholes. The temperature, pressure, gravity, everything in their world is intensely unpleasant by our standards. And so is their atmosphere, which is composed largely of ammonia and sulphur dioxide. If you’ve ever attended a chemistry class, you know what those smell like.”

He looked around at everyone. “Spatterloo’s atmosphere is thinner than ours, and extends rather further into space. When the ships reached attack orbit, they were inside the outer envelope of the atmosphere.

“Yes,” he said, his voice shaking with emotion, “our ships breathed in that noxious mix, and of course when that happened, the same thing happened to them as would have happened to you or me. And that is why we lost.”

Everyone’s attention was focussed on him, even the Admiral’s.

“The ships sneezed,” the professor concluded. “They sneezed, and kept sneezing. They kept sneezing till they literally sneezed the crew right out.”

Wiping away a trembling tear, he tottered from the room. 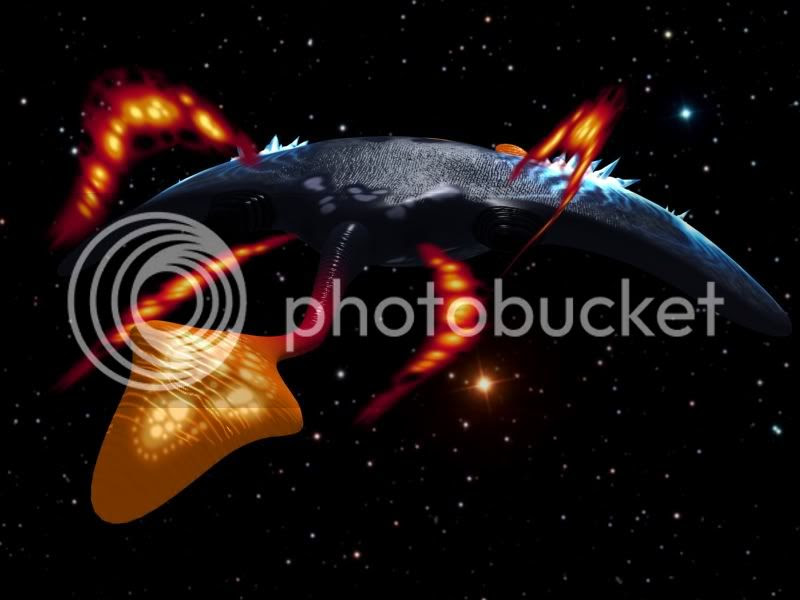