This morning when I went down to the riverbank, the flood had receded and the water was calm again. But when I looked down into it, the river was muddy and turbid, still loaded with the debris washed down from upstream, the red mud of the distant hills.

After the months of rain, the huts needed repair, their mud walls softened and the thatch roofs weakened by water and insects. Usually the men would have been at the work, their backs glistening with sweat in the sun, as they tore down the huts and built them back up again. But this year, of course, there were not many men left, and so it was up to us women to do what we could.

The sun had already risen, and it was hot by the riverside, the smooth mud left by the receding water beginning to smell, little insects dipping and zooming over it. I couldn’t tarry long here, because I had to go back up to the hut to look after my daughter, who was not yet a year old; and my father-in-law, who lay ill abed. There was nobody else to help, for my mother-in-law had gone to be with the ancestors years ago. And when all that was over, I would have to do what I could to mend the hut.

I sighed a little, wiping the beads of sweat off my brow. I’d have to go up soon, to the hut, and after that the rest of the day would go in toil, until the evening came and I might be able to rest a little. It was the same every day now, and each day I seemed to fall further behind.

Squatting by the river, I scooped up a little of the water and splashed it over my face and neck. It was muddy and streaked my fingernails, but it felt good, cooler than I’d expected, refreshing me with its touch. But once I’d reluctantly climbed to my feet, the air was hot and muggy already, and the sweat broke out again.

Before I left to walk up to the village, I peered down the river, as I’d done every day for over a year now, to see if the boat were coming back. I knew well enough it wouldn’t, of course, by now, but I could not stop myself. It had become almost second nature.

We’d grown up together, he and I, and known each other from the time we’d been babies. And we’d played together with the others of our age-group, running naked among the legs of the adults, who were always busy and would scarcely bother taking notice of us except to snap in irritation if we got tangled up in their baskets or smeared mud on their bright clothes. We didn’t care about that, we kids, because we had all the world to play in and all the time in the world.

For a moment, I could almost persuade myself that the past year had never happened, that it was the same as when I’d been a girl, and I’d run along this bit of the bank with the other children of my age. He’d been among them too, and we’d laughed and wrestled and fought as children did. I could remember so clearly the times we’d pushed each other into the water, and any adults standing around would yell that the crocodiles would come if we didn’t stop fooling around.

We’d always known we’d marry, of course; our parents had betrothed us while we were still infants in arms. But we’d been extremely fortunate in that we’d always got along – I’ve seen so many others in our position where there had been so much friction and mutual loathing that the marriage had finally had to be abandoned, and that always led to bad blood between the parents’ clans. But maybe – seeing what happened later – that would have been for the best. I didn’t know, couldn’t say.

I walked a little further into the river and moved my feet around, rubbing them in the water to wash some of the mud off. If I craned my neck, I could see the broken stretch of riverbank where the hut had stood where we’d lived after we married. The flood had carried away the entire piece of the bank, and if the hut had still been standing it would have gone too.

Sudden tears stung my eyes as I thought of the precious few months we’d had in the hut, after we’d married. We’d not thought we were happy – life had been the usual struggle, living from day to day. But thinking back now, it had been a happy time; as happy as a life like ours can get, anyway.

I watched a couple of children race each other along the bank. Two years more, and my daughter would be running with them, her tiny fat legs stumbling to keep up, and if she muddled my dress I’d no doubt snap at her too. She would be a beauty, my daughter – I could see it in the lines of the fine bones under her skin, in the set of her eyes. I wish he could have known her, but he hadn’t even known I was pregnant. We didn’t even have that long together.

I still feel guilty that I wasn’t there the day it happened. I’d gone with most of the other women to the new fields where we were clearing the brush to plant cassava, and it was only when we noticed smoke staining the sky in the direction of the village that we’d realised something was wrong.

It was all over before we rushed back, the huts in flames, the survivors hiding in the forest. My father-in-law had been among them. He’d told me that the raiders had come by the river, and struck hard and suddenly, achieving complete surprise. They hadn’t been out to maim or kill, that was not their way. What they wanted was captives.

I still remember how the smoke from the burning huts stung my eyes and burnt my throat, as I held my father-in-law as he coughed, and how he wept as he told of what had happened, about how the raiders had tied up their prisoners, thrown them like sacks of produce in their boats, and rowed off down the river. The last boat had held my husband, who’d still been struggling until one of the raiders hit him on the head with an oar.

“What will they do with them?” I’d asked, dread tightening my throat. “Will they kill them?”

“No,” my father-in-law had replied. “They will sell them to the pink men down on the coast.”

I drew a shuddering breath when I thought of the pink men. I’d seen them a couple of times when I’d gone to the market town, large and noisy, their pink skin making them look as though they’d been flayed. One had looked me up and down, his eyes the colour of a faded sky, as if he was stripping away my clothes and leaving me as naked as a baby. I’d been close enough to be able to smell him, too. He stank, of old sweat and something else, an odour my husband had later told me was tobacco.

“What will the pink men do?” I’d asked my father-in-law then.

“I don’t know...they say the pink men put them in big boats and take them away across the oceans. What they do with them there, nobody knows. Not one of those they took has ever come back.”

Sometimes I wish the pink men had taken me instead. My husband would have been able to better take care of my father-in-law, and do the work I had to do alone, now. But then what would have happened to my daughter?

Maybe, I thought, taking one last look down the river, the boats would come back, and bring him back to me. I knew it would never happen, but I couldn’t stop doing it. I don’t think I shall ever stop, not if I live to be an old woman. And I can never stop fearing that the boats will be back, but to take others, like my daughter. What can I do if they come? Nothing.

I can't even cry in front of my father-in-law and daughter, I thought, because I'm the only link holding us together. I don't even have the luxury of showing how weak, how inadequate, I feel. But that's the lot of women. We endure.

Maybe, I thought, we should all move away, the whole village, those of us who remain. But where can we go,  how far must we move, before we can be safe? Is any place far enough?

I wish we adults could do the same. 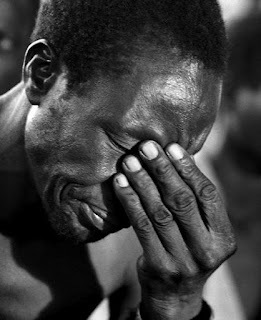