Hear, O People, and hearken well, for this is the most important news of your lives;

For the Lord Butcher commands you, that you shall lend Him your ears, without asking for surety or interest thereof; and if He doth not return them to you, that is your loss and yours alone.

And the Lord Butcher commands you, that you shall cease and desist a little while from your labours, so that you might hearken unto Him, for He hath brought you Holy Tidings of Great Joy. And when you begin your labours anew, you shall do as He commands, and not the shallow dross that passed for work all these miserable years of your lives. And in that you shall be content.

For hear ye, sons and daughters of naked apes who first learned to walk upright on the African plains; that the Universe hath more wonders than you know, or ye can know; from pulsars to whale songs, from dark matter to ball lightning, from Olympus Mons to Lady Gaga.

And that these Wonders, be they as small as a quark or as titanic as the Enclosed Curve of Spacetime itself, are only the creation of Great Cthulhu, He whose Prophet the Lord Butcher, and the Lord Butcher alone, is.

And hear ye, that Great Cthulhu has decreed, verily, that He is risen, in the sunken city that men call R’lyeh, and that He will no longer tolerate worship of the vile impostor, the Flying Spaghetti Monster.

For Great Cthulhu hath vanquished the FSM in mortal combat, and eaten him, meatballs, noodles and all, and washed him down with ale aplenty; and Great Cthulhu belched afterwards with contentment. RAmen.

could survive in single combat with this? 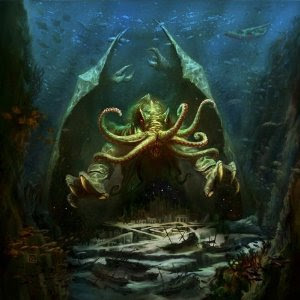 Verily, the late and tasty FSM is a false god; and it is not meet that a god who has been eaten and turned into excrement, even excrement bearing the divine Stink of Great Cthulhu’s Holy Bowels, should be worshipped.

Thus, verily, the Prophet Lord Butcher enjoins you to forthwith cast the idols of the vile FSM into the outer dark, even through your windows into the public street, caring not if they should brain some innocent passer-by, and join yourselves in worship of the Great One.

And the Prophet Butcher declares that the One True Prayer, which all Believers should utter seven times a day, and ten on weekends, shall be Ph’nglui mglw’nafh Cthulhu R’lyeh wgah’nagl fhtagn; and anyone who does not repeat this Great Prayer shall be liable to much more dire and immediate Holy Punishment than merely the Fires of Hell.

(What? No, the Lord Butcher will not teach ye how to pronounce the holy words; you must find the One True Pronunciation for yourselves. He who cannot pronounce them lacks Faith, and will verily be treated as all Heretics are, and be eaten by Great Cthulhu as entrees, even before Unbelievers who dare demand tawdry Proof, and who shall be the Main Course. So do not ask that question again.)

Now silence your tongues, and listen to what more the Prophet Lord Butcher, blessed be His name, has to say;

For Great Cthulhu has decreed the Prophet Lord Butcher His Vicar on Earth and His ruler over all men and women, from the oldest to the very child in the womb, for babies are tasty. And He commands, through the Lord Butcher, that ye shall build Him a Temple of gold and diamonds, silver and platinum, and the Lord Butcher shall lack for no comfort; for, verily, He is the Chosen One, who has been given a Whip of Fire to wield over you.

For listen, ye children of naked apes, and understand: if you will not obey, Great Cthulhu will rise from the waves, yea, and eat you first, even before the Heretics, who will become the Main Course, and the Unbelievers, who will merely be the dessert. And only the True Believer will be saved, as long as he believes, and so long as Great Cthulhu lacks not other things to eat.

And then Great Cthulhu will eat the True Believers as well, for He is as ever-hungry as one of the Black Holes He has created. But the greater your piety and belief, the later He shall eat you. So bend your backs and serve the Great One.

The Lord Butcher has spoken. 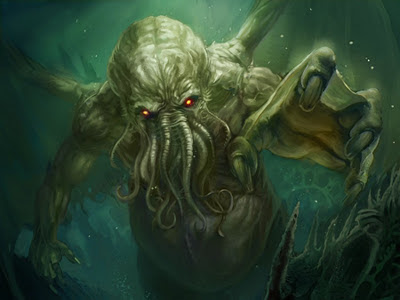