Seen from the air, the city of Bombay stretches like a finger pointing south into the Arabian Sea. The city is surrounded by the sea on three sides – the west, the south and the east, where it parallels the coast of the Indian peninsula.
Exactly three years ago as I write this, on the evening of the 26th of November 2008, a rubber boat drew up at a jetty used by fishermen on the west coast of the city. According to the official account, ten young men landed from that rubber boat while fishermen watched. They were fairly well dressed, in T shirts and cargo pants, and had rucksacks on their backs. They may or may not have been challenged by local fishermen, depending on whom you believe, and may or may not have produced fake papers showing them to be students of a college in Hyderabad, again depending on whom you believe.
It’s kind of difficult to believe anything about the official story, going by the incredibly complicated and contradictory tale it tells. Apparently, these ten young men (I have earlier written at length on why I can’t believe that there were only ten) were fidayeen attackers belonging to the Pakistani jihadist group, the Lashkar-e-Toiba. Their backpacks were loaded with AK series rifles, grenades, pistols, ammunition, and food enough to last them for several days, as well as GPS systems and mobile phones, all with Pakistani markings.
They had apparently sailed several days ago from the Pakistani port city of Karachi by ship, and then hijacked an Indian trawler off the coast of the state of Gujarat. They had then killed the entire crew of the trawler except the captain, whom they compelled to sail them to Bombay. They then killed him, and abandoned the trawler (helpfully still loaded with packets of tissue paper, milk powder, flour, soap powder, and other groceries, also all with Pakistani markings, not to mention a GPS system with a map to help them navigate back to Pakistan) to climb into their rubber boat, which they paddled into waters right next to a major Indian Navy base, landing on a waterfront which was usually crowded with people – and got away undetected.
Besides, they allegedly had already reconnoitred the city in some detail; a city where local jihadist terror groups had already carried out attacks in the past; yet they chose this absurdly risky amphibious assault, without making any effort to coordinate with local agents, or to simply infiltrate into the city in ones and twos and attack when they were ready.
I ask you – if this were a movie, would you have swallowed any of it?
In any case, these ten young men then – again going by the official account – split up into five pairs, who then spread out through the city on foot and by cab, and then proceeded to unleash three days of holy hell. By the time the ninth of them was killed, the total death toll was 166, among them a substantial number of foreign citizens. This last little fact – that most of the targeted spots were hit because of their popularity with foreigners and the upper class Indian elite – was what brought this entire episode to global consciousness.

Otherwise, you know, meh.
Note that I specified that by the time the ninth was killed. One of the alleged ten attackers had been captured alive the very first night of the assault, and was, also (original wording) “singing like a canary” in custody. His name, it turned out, was Mohammad Ajmal Amir Kasab, and he has since become pretty much the (young and innocent-looking) face of the attack, being blamed for virtually every death during the incident. 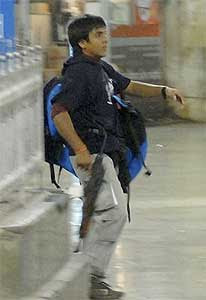 I realise, incidentally, that usually I’m not exactly very complimentary towards my fellow Indians. In fact, usually I take pride in calling myself a card-carrying traitor, since I’m no patriot and never will be.
But I will point out a few things that India did and didn't do after this strike (which, you know, could fairly accurately be blamed on someone in Pakistan, even if said someone was a jihadist group and not the Pakistani government); things which prove that we Indians are still on the right side of sanity:
1.     India didn’t bomb, invade, or send commando forces to carry out strikes inside Pakistan. India didn’t even threaten to bomb, invade or send commando forces to carry out strikes inside Pakistan.
2.     India made no attempt to frighten everyone into falling behind the government with an absurd colour-coded terror alert system, and made no attempt to use this episode to restrict civil liberties. Not that most Indians actually have much in the way of civil liberties, except on paper, but they weren’t wiped off the paper.
3.     The “sole surviving terrorist”, Kasab, was not waterboarded, put in an orange jumpsuit, and stuffed in a cage in some distant out of the way concentration camp. Nor was he denied a trial on the grounds of it being too dangerous. He was quite openly tried in the civilian courts, provided with full legal counsel, and though he was sentenced to death, he’s appealed and his appeal is quite legally going through the system. 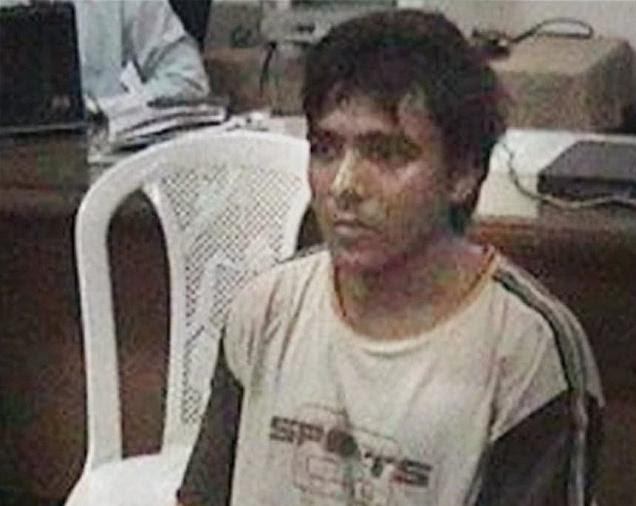 These things actually make me proud. We aren’t that great, but going by the way certain nations which preach to the world have jumped off the deep end, we certainly could have done much worse.
Recently, I was in Bombay, and visited the sites of some of those terror attacks. There is some security, mostly fairly openly for show. Like this police picket, at the Chhatrapati Shivaji Terminus (formerly Victoria Terminus), Bombay’s main commuter railway station, which was attacked by Kasab and his partner. Note the NO ENQUIRY on the sandbags, presumably to protect him from the slings and arrows of outrageous questions. 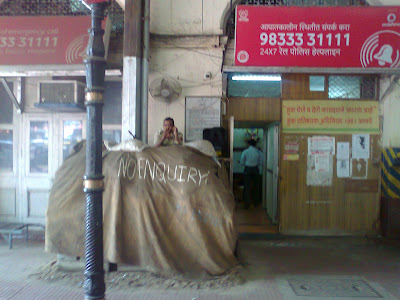 In fact, what I discovered in Bombay was a determination to move on – one of the things I love most about that city. The people did not consume themselves with a thirst for revenge, and did not allow their trauma to be used by others as an excuse for revenge. No Muslims were massacred in retaliation (in fact, a substantial number of the victims of the attack were Muslims themselves, especially at the CST), thus foiling what was almost certainly a primary purpose of the attacks – to create a religious divide which would cause the marginalisation and radicalisation of Indian Muslims. Today, it’s hard to believe (even more so because of the farcical security, most of which is plainly eyewash) that there had been a major attack.
Let’s take a look at some of the targeted sites, as they were in 2008 and as I have seen them myself. In each case, the 2008 photo is from the Internet while the 2011 photo is by me.
Here’s Leopold Cafe, a congested and overpriced hangout of younger foreign tourists and rich Indians, in the immediate aftermath of the 2008 attack: 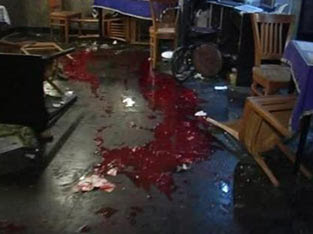 Here’s Leopold Cafe today; crowded with people, and more waiting outside for their turn, while the pavement outside is lined with stalls selling everything from optical instruments to clothing: 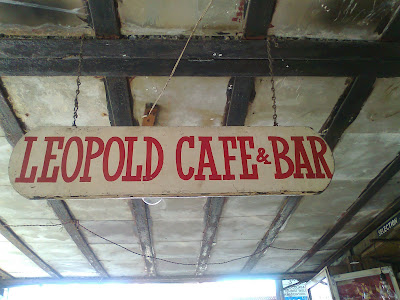 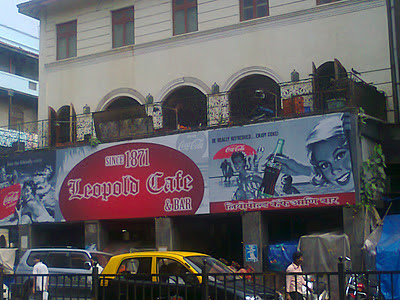 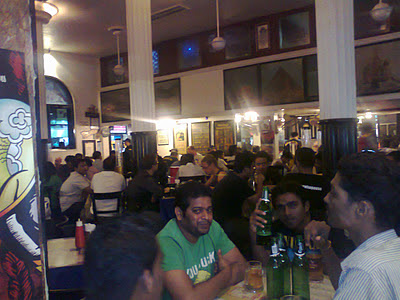 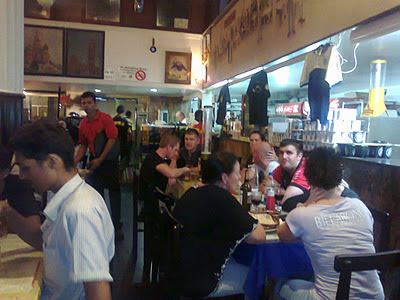 Here’s the Taj Hotel, scene of a bloody three-day standoff, which was badly damaged by fire and where firefighters evacuated people right in the middle of the fighting:

Here’s the same hotel today. No, I didn’t go inside to take photos – it’s kind of out of my class – but the outside will do fine. Incidentally, this area was the scene of other terror attacks over the years. 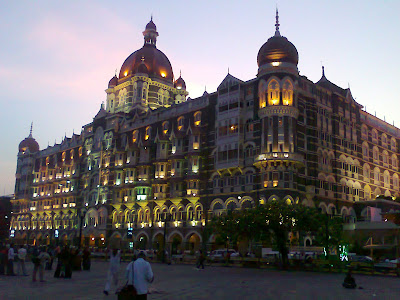 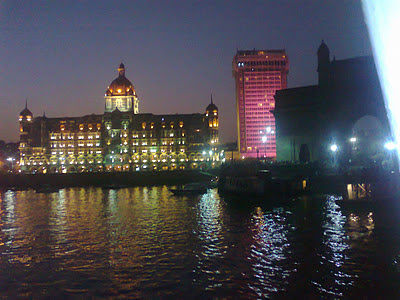 Here’s CST, after Kasab’s rampage. The fact that most of the people killed at this spot were poor and middle-class commuters meant that the elite media virtually ignored it in favour of the more upscale targets: 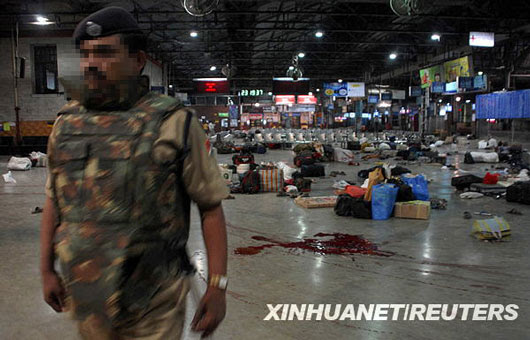 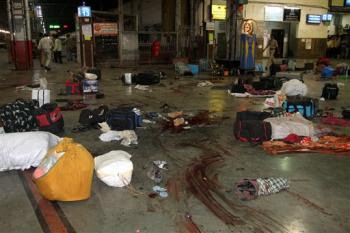 Here’s CST today. Who has time to be afraid? 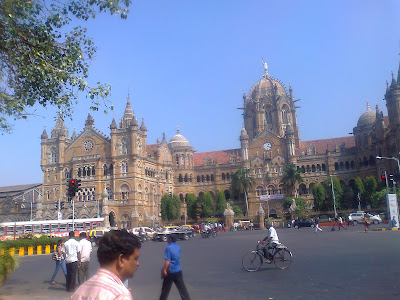 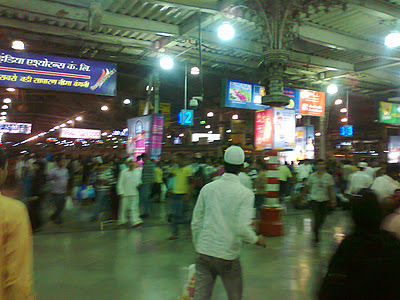 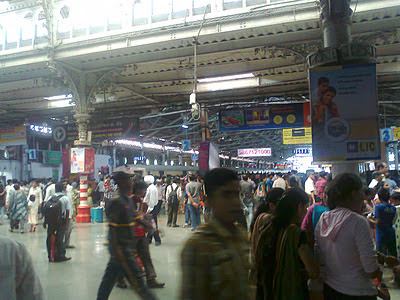 I’m not saying the victims of the terror attack should be forgotten. But Bombay demonstrates that there is another way to commemorate them than by an annual rite of hatred, soaked in the blood of innocents in a land across the sea.
Of course, maybe I am wrong. Perhaps exterminating innocent people elsewhere in the name of “protecting Indians” would have helped to prevent more terror attacks.
But I don’t think so.
Posted by Bill the Butcher at 9:40:00 pm