Interview With A Terrorist 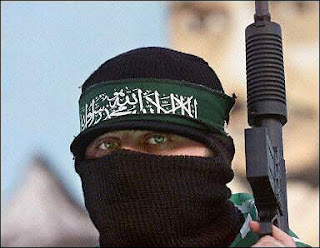 Good evening. Your favourite reporter, Bill the Butcher, went to great trouble to meet and interview one of Al Qaeda’s top terror masterminds, Abu Qatil-i-Khoonkharabi, in his hideout somewhere in the wilds of a major European city.
The process for arranging the interview was simple; I just picked up the nearest telephone directory and looked under “freedom-hating evildoer”. A few phone calls later, a discreet car turned up at my front door, discreetly escorted by two CIA men in another discreet vehicle. A very nice-looking young terrorist drove me back to the secret hideout, regaling me with stories of his friends in the corridors of power in Washington. After reaching the million dollar mansion modest suburban flat without internet or air-conditioning where the terror mastermind was hiding out, my driver escorted me through a series of body scanners and TSA-trained body searchers before admitting me to the Holy of Holies, Abu Qatil-i-Khoonkharabi’s inner chamber where he sat at a large desk in an oval-shaped office.
Abu Qatil-i-Khoonkharabi is a man you would instantly know is an evildoer. He’s tall and handsome, and has a brilliant smile with even teeth and perfectly set hair. When he talks, he exudes such perfectly insincere charm that he’d be a natural for the role of presidential candidate used car salesman. Before starting the interview, he kindly posed for photographs with his charming wife, two daughters, and pet cat. However, due to the fact that the TSA-trained body searchers had confiscated my camera, I could not actually take photographs. Mr Qatil-i-Khoonkharabi promised me that he would Change the security measures to make it easier for those like me to do our jobs in future.
Excerpts from the interview:
Bill: Thank you for granting me this interview, Mr Qatil-i-Khoonkharabi. I must say that I’m impressed by your group’s dedication.
Abu Qatil-i-Khoonkharabi: It’s all the fruit of the sacrifices made by our valiant terrorists in the war against freedom and democracy. We will strive on until final victory, because our enemy represents everything we hate in the world, like freedom and democracy. We hate freedom and democracy, in case I haven’t mentioned it before.
Bill: Why do you hate freedom and democracy?
Abu Qatil-i-Khoonkharabi: Because we’re evildoers. Didn’t you do any research before coming here?
Bill: Uh, well. Why did you decide to become an Al Qaeda terrorist?
Abu Qatil-i-Khoonkharabi: It’s tough being a freedom-hating evildoer in a nine-to-five job. You try and see how that works out for you. Besides, how could you ever get famous that way? If I were a construction supervisor, would you’ve bothered interviewing me?

Bill: Any other reason?

Abu Qatil-i-Khoonkharabi: We wanted Change. Al Qaeda guarantees Change. Also it guarantees that people in key defence industries continue to make a profit. While the rest of the world economy goes down the drain, it's nice to see someone profiting for a Change.

Bill (reaching into pocket): I think I have some Loose Change here...

Abu Qatil-i-Khoonkharabi: Not that kind of Change. We don't want the Truth, just the youth.
Bill: Tell me, now that the Americans killed Osama bin Laden, isn’t your group feeling the pressure?
Abu Qatil-i-Khoonkharabi: Bin Laden? I have a secret to tell you about bin Laden.
Bill: Secret? What secret?
Abu Qatil-i-Khoonkharabi: He was a zombie.
Bill: Huh?
Abu Qatil-i-Khoonkharabi: You know how many times he died? But he kept coming back and coming back from the dead, over and over. It got to the point you could hardly stand the smell. So they put him down by shooting him through the head. Even then the stink was so great they had to throw him in the ocean. Otherwise it would’ve stunk up some very high places. Places just below High Heaven. You know how bad odours are.
Bill: Uh, yeah. I mean, anything’s possible, right? So you mean to say his killing hasn’t weakened your organisation?
Abu Qatil-i-Khoonkharabi: No, why should it? Our greatest friends and allies sit in the highest positions of power, after all. They need us strong, not weak. You saw the escort they provided to make sure you reached me safely? And you saw the security they’ve laid on?
Bill (massaging crotch): Yes, and they groped me hard enough to blow up any bombs I might have been carrying. Why do they need you strong, if they call you their enemies?
Abu Qatil-i-Khoonkharabi: Why do you think? [Pours whisky] Try this. The best bourbon in the world. With the compliments of the FBI, and tested toxin-free, don’t worry.
Bill: Thanks. So the conspiracy theorists are right? You’re in this together?
Abu Qatil-i-Khoonkharabi [sinister silence]
Bill (hurriedly): What do you have to say to accusations that you want to set up an Islamic Caliphate?
Abu Qatil-i-Khoonkharabi: Why shouldn’t we? Our dear friends in the decadent West are busy setting up a Denominationist Christian realm, after all. We’re both against the weak-kneed anti-religion bleeding-heart liberal scum who...[trails off into incoherent abuse] And those secular dictators. Like, I mean, man, we all hate them there socialist vermin. You know, how we’re on the same side against them.
Bill: So you’re still strong?
Abu Qatil-i-Khoonkharabi: You bet we’re still strong. Just yesterday we set up another group of freedom-hating democracy-hating freedom fighter democracy activists in Syria.
Bill (after brief pause): Can you tell me why you haven’t attacked the US recently with effective weapons? After all, shoe bombers and underwear bombers aren’t very effective, are they?
Abu Qatil-i-Khoonkharabi: But now everyone has to take off their shoes and pretty much take off their underwear before boarding a flight, don’t they? And once we carry out our next planned failed bombing...
Bill: Which is?
Abu Qatil-i-Khoonkharabi: They’re going to demand every passenger have dental X-rays and enemas before being allowed to fly. I’ll say no more.
Bill: Are you scared of assassination by drones?
Abu Qatil-i-Khoonkharabi: I love the drones. I love how I can have them kill my rivals and enemies. Only yesterday I... [passage redacted in order to protect identities of sources and preserve military secrets]. Besides, by wiping out kids and women, it keeps the population under control. You know what a problem overpopulation is.
Bill: Uh. OK. I have another question that you might want to answer. Why have you never thought to attack Wall Street?
Abu Qatil-i-Khoonkharabi: Why should we attack Wall Street? They’re doing our jobs for us. Hitting Wall Street would be like chopping off your worst enemy’s hand just as he’s about to cut his own throat. Not a good idea. [Stands] Well, I’ve some evil to do before supper.
Bill: One final question. How long do you think it’s going to take to destroy freedom and democracy?
Abu Qatil-i-Khoonkharabi: It’s already done. It was done for us.
Bill: It was?
Abu Qatil-i-Khoonkharabi: You haven’t been paying attention, have you? We’re proud to announce those things don’t exist anywhere any longer. [Gestures] Your escort is here.
Bill: My escort? What escort? [CIA men grab him] What the hell is this?
Abu Qatil-i-Khoonkharabi: You know too much now to let you go. Happy renditioning!
[I’ve just escaped from a secret CIA prison under Buckingham Palace. I am now crouching under the Queen’s chair, and am posting this interview in haste before I can be recaptured. Look out! Abu Qatil-i-Khoonkharabi’s secret hideout is in bhiohgoighgfh0-
Posted by Bill the Butcher at 10:34:00 pm