Today, my assistant's sister invited me for her seven-month-old daughter's weaning ceremony.

Yes, that’s what I said – weaning ceremony.
What’s that again?
Well, it’s a fairly typical ritual among Bunglee Hindus, known as onnoprashon in the original Bunglee. It marks the official first solid food that the kid is allowed – or, to be more accurate, compelled – to consume in its life. Before that, it’s not supposed to ingest anything except milk, water and medicines, if any. 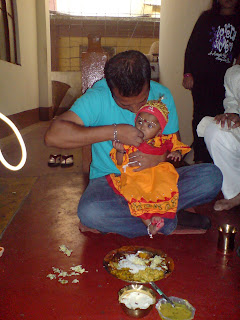 As you can see in the picture, which I took during the ceremony, the kid is dressed in a crown and fancy clothes and while a Hindu priest mumbles Sanskrit prayers over it, food (and not just any food either, they have rituals for that too; rice, clarified butter and I don’t know what else) is put/forced into its mouth.

No, I can’t explain further because I have no further knowledge on the subject.
I didn’t have any great desire to go, but my assistant requested my presence, so I went, marked attendance, took this picture for your elucidation, and came back.
There used to be another ceremony, called hatey khori (literally stylus in the hand) in which the older (five or six year old) Bunglee kid would formally begin its education. It was not supposed to be taught how to read or write before that. Not surprisingly, in a world where competition is intense and parents are pushing their children into the school system by the age of three or four, that is one tradition which is entirely and deservedly extinct. And that proves something else I’d always knew; traditions are far from sacrosanct.
If someone doesn’t junk a tradition, it’s only because they don’t want to, hard enough.

No other reason, whether "social" or "religious", holds water.
Posted by Bill the Butcher at 6:32:00 pm

Email ThisBlogThis!Share to TwitterShare to FacebookShare to Pinterest
Labels: people