More religious nutjobbery (and a candidate for Astra's Batshit Roundup) 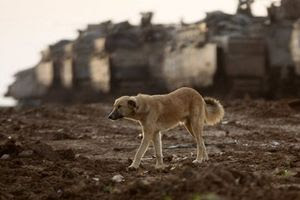 A Jewish rabbinical court in the Zionazi pseudostate (that's the so-called state of "Israel" for those new to my world) sentenced a dog to death by stoning.


What was the dog's sin? Apparently, it was the reincarnation of a lawyer who had insulted the court's judges twenty years ago. And the punishment for this behaviour was that the lawyer's spirit was cursed to be reincarnated as a dog.

(On a side note, as a dog lover, I wouldn't mind being reincarnated as a pit bull or a Tibetan mastiff.)

Now, how did our canine hero - this specific canine hero - get the honour of being identified as the carrier of the lawyer's spirit? To quote from the link:

According to Ynet, the large dog made its way into the Monetary Affairs Court in the ultra-Orthodox Jewish neighbourhood of Mea Shearim in Jerusalem, frightening judges and plaintiffs.

Maybe the dog just liked the look of all those rabbis? Just wondering.

Anyway, they decided to have the dog stoned to death. By children.

I don't know whether that was supposed to harden the children's hearts and make them more ready to throw bombs at Palestinians later. I don't see any other reason why the learned judges couldn't do the dirty work themselves, unless of course they were scared of casting the first stone.

Or maybe they were afraid the dog would curse them?

Fortunately for everyone, the dog escaped. I wonder though what would have happened to the dog's "spirit" if they had stoned it. Would it have become a rabbinical judge?

Another and more serious question. Just suppose it was some semiliterate mullah in an Islamic country which had done this. Can you imagine the shrill howls of righteous Islamophobic wrath all over the blogosphere, the protests from PETA and Holloweed Hollywood stars? Can you imagine the anti-Muslim sentiment disguised as the wrath of animal lovers?

You can, of course, because you've seen it all before.