This is one of those things online – like this other one that I discussed a few days ago – that I’ve grown tired of analysing each time I see it, or variations thereof. Like that other meme, I’ve got to the point where I need to get my opinion, and the facts, written down for everyone and get it over with once and for all.

Now, the Jesus of the Bible was not a real person. I am not going to go into the question of whether he existed or not – there are websites for that sort of thing; I’m just stating a fact. The Jesus of the Bible is a composite character, whose details vary between even the four official Gospels in irreconcilable ways.  Therefore, he is not a real person. There may have been no Jesus at all, or he may be an amalgam of different historical people with a leavening of myth, or he may have been a real person whose life was mythologised out of all proportion, just like we see happening before our very eyes with certain political leaders these days I could name.

But he was not the Jesus of the Bible.

Still, if there is one story people seem to like about Jesus – even atheists and agnostics, and especially people of the leftist persuasion – it’s the one where he chases the “money lenders” and “animal sellers” out of the Temple with a whip. It appeals to all their sentiments against the parasitical banking industry and the commercialisation of religion. It is the one Jesus story that some say makes them believe he actually existed.

They’ve turned it into any number of memes, of which a typical example is this: 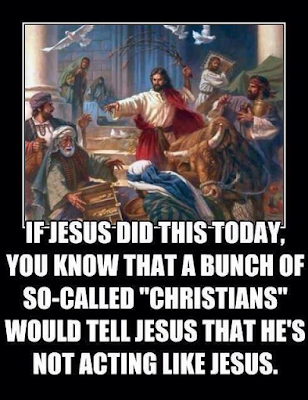 What a pity, isn’t it, that this is the one “fact” in the Jesus story which is utterly and totally impossible?

In the first century of the current era, Palestine – Judaea and Samarra – was a Roman possession. The Romans ruled, at the time, through puppet Jewish kings, but the power of Caesar, acting through the prefect, was paramount. [The prefect of the time, Pontius Pilate, actually existed. He was the fifth to occupy that position, and in real life was a blood-soaked war criminal implicated in several massacres, who wouldn’t have blinked at executing yet another Jewish rabble rouser. His “hesitation” in crucifying Jesus was an invention of the latter Gospels meant to make the new religion more acceptable to Roman converts.] Since Judaea and Samarra were Roman possessions, though the Jews living there were at that time allowed their own coinage, Roman coins were in wide circulation. Also, there were very large Jewish communities living elsewhere even then, in places like Alexandria and Asia Minor, and even further afield. They, naturally, used Roman currency exclusively.

But there was, by Jewish standards, a problem with these Roman coins. What was this problem?

The Emperor of the period was Tiberius Caesar, who ruled from 14 to 37 CE. These are his coins:


Like every other Roman Emperor, the coins bore the profile of Caesar, in this case Tiberius.

But remember that YHWH commanded “Thou shalt not set graven images before me”? That's the third of the ten commandments.

Now, the Temple in Jerusalem was the centre of the Jewish religion at the time. Pilgrims came from all over the Jewish-settled parts of the world to visit it, pray to YHWH, and offer sacrifices. Remember that YHWH wanted sacrifices? And, of course, like any and all other religious activity, they were to donate money to the Temple.

Why would the Temple want money? Simple. All organised religion is ultimately commercial activity. How, without money, could anyone even build a house of worship, furnish it, and maintain it, even without the expenses of the flowers, incense, or wine and crackers used in the services, without money? It’s only common sense, right? Those who go on about the commercialisation of religion today are simply avoiding the point that it’s been commercial since the first “priest” banged one stone on another, proclaimed the advent of the Great God Ug and demanded contributions of fruit and meat from everybody.

But the point is that these Roman coins, being engraved with the profile of Caesar, could not be taken into the Temple.

And that is where the money-changers – they were money-changers, not lenders – came in. They provided an indispensable service, by converting the pilgrims’ Roman coinage, at a commission, naturally, into Temple coins. As for the sellers of animals, remember the sacrifices YHWH demanded? Pilgrims coming all the way from Egypt or Rome, Turkey or Syria, couldn’t be expected to bring sacrificial animals with them. They would naturally look to buy them as close to the Temple as possible, just as Russian Orthodox Churches today have candles for sale within the church itself. How much closer to the Temple can you get than the Temple forecourt?

And, yes, they were in the Temple forecourt, not in the Temple. Apart from the High Priest, nobody was allowed to enter the inner sanctum of the Temple itself, let alone the money changers and dove sellers.

You see where I am going with this? As a Jew, how could Jesus not have known all this? This is even more true if you accept the idea that he was, as per some accounts, so learned in Jewish law that even as a child he could hold his own in discussions with the “doctors”.

But perhaps Jesus did not accept Jewish law? Well, then you have to explain away what he, himself, allegedly said:

“Think not that I came to destroy the law or the prophets; I came not to destroy, but to fulfill. For verily I say unto you, till heaven and earth pass away, one jot or one tittle shall in no wise pass away from the law, till all things be accomplished” (Mt. 5:17-18).

Therefore, these are the three possibilities:

First, it never happened. Jesus did not do any such thing. It is a story.

Second, Jesus was not a Jew. In which case the rest of the Bible becomes null and void, and raises the question of why a non-Jew would’ve wanted to go to the Temple anyway.

Third, Jesus was insane, like one of those religious fanatics who destroy things in the name of the voices in their heads – think ISIS, or the man who a few decades ago took a hammer to Michelangelo’s Pieta, convinced that God had told him to smash it. In fact, it is possible that some random unstable person did do something like this, and it got attached to the Jesus story later.

There is no fourth explanation.

You can decide which one you prefer.

Email ThisBlogThis!Share to TwitterShare to FacebookShare to Pinterest
Labels: religion