This knocking is irritating me. I’m serious. Stop knocking.
Look, let me try and explain things. Here I am, minding my own business in the nice cool wet darkness, and you people keep knocking up a row. It’s making it impossible for me to sleep. Worse, it’s giving me a headache. And when I have a headache, I get cranky.
What do you mean, who am I? You ought to know that by now. You don’t? Well, I won’t waste my breath by telling you – unless you force me to.
No, you can’t see me. But I’m close. Not far away at all, not far enough for you to get away, even if you run. You can't get away and you can't hide. No.
But I don't want to hurt you. All I want is -
What part of stop knocking don’t you understand?
All right, that was your last warning.
I’m coming, and when I get to you, wherever you are, I will eat you all.
I hate knocking. I hate all loud noises, actually, but most of all I hate knocking.
Too late now to run. I warned you. Go ahead and scream - I don't mind. You won't scream long enough for it to matter. And you'll stop knocking.
Not for nothing am I called the Knock Less Monster. 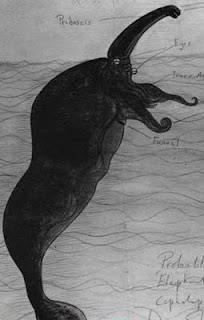 Romeo Must Die: The Nanavati Case.

As a lot of us know, a jury let off a woman in the US, one Casey Anthony, who was charged with murdering her daughter and whom a lot of people – including media bottom-feeders – seem to have tried, convicted, and executed in absentia, and whom the acquittal sent into conniptions.
Now, this article isn’t about Ms Anthony; I don’t know or care about the case enough to make any statement about it except to say that anyone victimised by a media trial has my full and entire sympathies, whether he or she is guilty or not. This article is about juries, or, more specifically, why India abandoned juries in 1959, and why I agree wholeheartedly with that decision.
There was a man named Kawas Manekshaw Nanavati.

In 1959 he was 34 years old, a Commander in the Indian Navy, a former military attaché to Britain, and had friends in high places, including the family of then Prime Minister Jawaharlal Nehru. He also had an English wife, one Sylvia (then 28) and two sons and a daughter with her. Sylvia and the children lived in Bombay, while Nanavati himself was usually away (he was posted on the cruiser Mysore at this time).

Strange Fancy For A Naked Ape

Have you forgotten what you are?

Let me remind you.

You are:
A collection of

And
You are
A gene's way of making another gene.
A naked ape crawling on the surface
Of a ball or rock and water, turning round and round
A minor yellow sun.


And you think yourself
Special
Made in the image
Of some deity.

If so, your gods
Can't be very important gods,

Today, the last Space Shuttle flight was launched, and a lot of people are mourning.
Well, I’m not among them.
The Shuttle isn’t, contrary to much uninformed opinion, the Greatest Thing Ever Built, or a testimony to American prowess. It’s also not as though no other nation had the technology to construct a space shuttle. So why didn’t they?
Here’s why: the Shuttle was always a propaganda device, a ridiculously uneconomical ego trip.
The reason no other nation built a working shuttle was simply because it was so expensive. The USSR constructed one, the Buran, used it on a test flight, safely recovered it, considered the costs and abandoned it. The vast majority of space launches, both manned and unmanned, during the Shuttle era remained disposable rockets like the European Space Agency’s Ariane and the Russian, Chinese, Indian and Japanese space programmes.
Nor is the Shuttle anything like safe. Compared to disposable spaceships, the Shuttle has a woeful safety record; recall how the Challenger was destroyed by a fuel pipeline leak and the Columbia by a couple of loose tiles, and how every launch since has had people at NASA in palpitations.
Notice that while the Shuttle has been deep-sixed, the old Russian Soyuz continues as the backbone of the manned space programme, and will for the forseeable future. With non-military NASA budgets dropping by the day, I for one won’t hold my breath about a successor anytime soon, not unless it’s capable of bombing innocent nations halfway round the planet from up in orbit.
Unsafe and horrendously expensive, not to forget merely a political statement, good riddance, Shuttle.
I for one won’t miss you.

Email ThisBlogThis!Share to TwitterShare to FacebookShare to Pinterest
Labels: space One day recently, while pondering on this and that, I had a sudden epiphany of sorts.
I thought how Hitler, if only he hadn’t been such an idiot, could have been called a beacon of economic freedom and free enterprise today. Camps and all.
In fact, especially because of the camps.
As those of us who care to have a smidgen of historical knowledge are well aware, Hitler, despite being the head of the National Socialist party, was extremely capitalist-friendly (as long as said capitalists weren’t Jewish, of course); and hired the camp inmates as cheap labour out to capitalist corporations, such as Krupp. And these selfsame capitalist corporations were treated with remarkable delicacy by the Allies at the war crimes trials.
Now, if Hitler had had a little sense, he’d have privatised the concentration camps, turned them over to corporations which sold stock on the international bourses, and you know what? The profit motive (alias “Greed is Good”, to quote Mr Gordon Gekko) would mean that he’d be praised as a pioneer of business efficiency, who got the maximum labour out of his workforce for the minimum expenditure. And the more Slavs and Jews he could lay his hands on, the more labour to be had, so the war in East Europe (against godless Communism, please remember) would pay for itself. Wouldn't it?
And of course there were the additional benefits, like medical trials (which pharmaceutical companies would pay to be allowed to try out, without anyone whingeing about ethics or informed consent), the gold teeth, the human hair harvested for felt cloth, and for the niche market the human skin lampshades and the soap from human fat...the possibilities are endless. And the grateful corporations would have flooded the Nazi party with contributions, so it's not as though Hitler would lose out, either. Right?
[As an aside: many Indian business schools use Mein Kampf these days to teach management techniques (no, I am not joking), so, believe it or not, there's contemporary relevance, right there.]
But even if Hitler would have done that, you say, he was a dictator, wasn’t he? Wouldn’t he have been repugnant to democracies?
That’s where the second part of Hitler’s stupidity comes in. As we who care to study history know, Hitler came to power in an entirely democratic election, and converted that into a dictatorship under emergency rule. If he’d had sense, he’d have arranged sham elections – openly sham, maybe, but elections – which would have kept him in power. You know, like so many freedom-lovin’ great leaders the democratic world loves to love, while ignoring the jails filled with tortured dissidents and the mass graves in the jungles.
We live in a world where “democracies” hold elections which make absolutely no difference to the policies followed, no matter who wins; and where private prisons pack their cells full of inmates who are used as virtual slave labour. So all I can say is that Hitler was probably a visionary.
He just didn’t go far enough.

My Grandmother and the Evil Eye

When I was a kid, maybe seven years old, my grandmother had this ritual she used to perform every Saturday evening. It was meant to remove all the "evil eyes" that were allegedly inflicting themselves on me all week long at school, you see.

So this is what she did:

She would take a handful of mustard seeds and a few dried red chillies, and wave it around my head and body as I sat doing my homework. Then she would go off and burn it.

If it gave off a stink, that meant that the evil spirits were being burned off and it proved that I'd been targeted by envious ill-wishers during the week. If there was no stink (I wonder how she determined that there wasn't a stink because anyone who's burned a dried chilli knows what it smells like) that meant that the next week she'd have to be doubly vigilant, because of course all those evil spirits would be even more anxious to permeate my body.

Then there was the thing about nail-clipping. You shouldn't clip your nails after dark, and you should never, ever, clip them on Saturday. Nor should you have your hair cut on Thursday. Why not? Even she didn't know. But that's what she'd grown up hearing, so that's what she internalised.

I don't mean to say she was a dyed-in-the-wool conservative. For her time (she was born in 1908 and lived till 2001) she was extremely liberal, to the extent that she was far more liberal than most members of my dad's generation. And long before she died, she accepted that all the rituals were horseshit. Of course, I'd made a point of deliberately disobeying all those commandments, to her face, years ago, without any ill-effect. She couldn't ignore that, and didn't try.

I still want to know how she smelt those evil spirits in the burning chilli, though.
Posted by Bill the Butcher at 8:57:00 pm 2 comments:

Email ThisBlogThis!Share to TwitterShare to FacebookShare to Pinterest
Labels: family