I am the Afghan child cowering in her mother’s arms when foreign men in uniform break down the door in the middle of the night guns pointing shouting
Things in a language I do not understand, orders my mother can’t comprehend, dogs barking, lights flaring in our eyes, blinding bright
My father knocked down to the floor, hands pulled behind him, kicked in the side till the blood pours from his mouth, then dragged out –
Dragged to a shed in Bagram, tied down to a plane to be sent to a cage in Guantanamo, year in year out, force-fed, and waterboarded twenty times a day
My brother not here to see it, because he’s dead, shot on a whim, his fingers hacked off as trophies and his head, blood mask, held up to the cameras.
I am that Afghan child.

I am the Iraqi man driving my wife to hospital, she cradling her big belly by my side, the baby on the way, no longer willing to wait, eager to see the world
The streets studded with checkpoints, the foreign soldiers watching as the cars come, one by one, stopping them to search them,
The soldiers who brought us freedom, who drive around in their cars shooting at us, and laughing, taking videos they post to the web to show the world what they can do
What they can get away with – and by my side, my wife gasping as another contraction hits, her dress going dark between the legs as her waters break
And the soldiers shooting, shooting, the bullets through my car like butter, through her, through the baby, and I touch my wife’s dead face.
I am that Iraqi man.

I am the Yemeni boy, at my sister’s wedding, the whole village gathered, friends and family, all come to see, and to celebrate, the groom from the next village
They’ve known each other all their lives, and they’ll be happy together, everyone says, and they urge me to sing, for they know my singing, that I sing well
I smile, and I sing and dance, forgetting for a while the charred cars in the street, the village school struck as if by lightning, burned walls and windows blasted out –
Then there is a buzzing in the air, above, eyes watching a screen in a far foreign land, toggling a joystick and presses a button
And my sister’s wedding explodes, blast breaking walls, shrapnel slicing through her, through her groom, through the guests one and all, and there is nothing left, and I can’t sing any more.
I am that Yemeni boy.

I am the Sudanese girl, held in my mother’s arms, suckling at a breast gone dry, the flies buzzing around my face
I have two days to live, the doctors said, even if I wasn’t starving, even if my mother had milk to give me, the disease eating me inside
The doctors at the hospital, who could help me if only they had the medicine, the syringes, but the hospital has nothing, the hospital is bare
Because a man in a foreign land had a sexual scandal, and thought bombing a medicine factory was a good way of diverting attention, a man who had the power to do that
As well as put sanctions afterwards, because someone didn’t like my country’s leader’s face, the leader I did nothing to choose, the country I did not choose to be born into, and that is why I must die.
I am that Sudanese girl.

I am the woman in Donetsk, cowering in the cellar, while the shells burst overhead, bricks crashing, the floor trembling under my feet
Wrapped in all the clothes I can get on, the air freezing, holding my neighbour close, telling her it will be all right, knowing that her home is rubble now
Watching the children’s faces, wide-eyed by candlelight, knowing I will have to go out in a while, to look for food, to look for water, to look for a way to stay alive
While my people are called beetles by swastika-waving democracy-lovers paid and trained, armed and supported, by someone on the other side of the planet
And my husband – who never hurt a fly before – goes with a gun in his hand, to fight, perhaps to kill and to die.
I am that Donetsk woman. 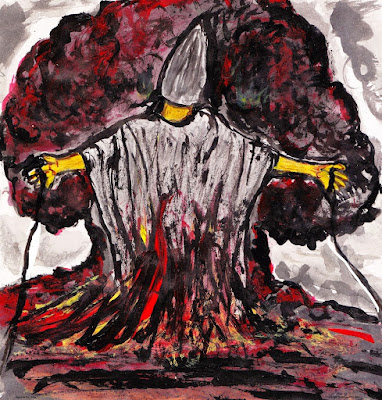