The Little Dragon of Medina: A Readymade Horror Story

You want to know why I’m an evil, evil person?

Take a look at this beautiful painting. It’s called "Fellaheen Women by the Nile" and is by French orientalist painter Léon Belly, painted circa 1856. 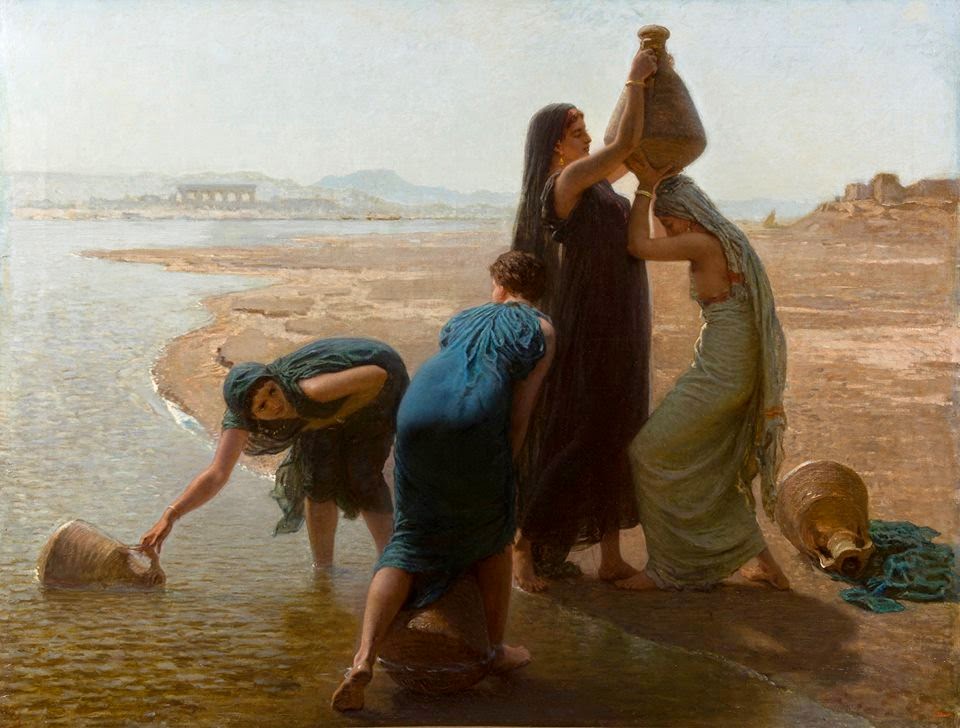 Lovely women, aren’t they? Graceful as they stand, barefoot in the water, filling their pots.

Well, I looked at this lovely painting, and the thing that came to my mind is not that the painting is so beautiful, or that the women are so graceful, but just a couple of words:

What is Dracunculus medinensis? It’s commonly known as the Guinea worm, and is a charming animal found across tropical Africa and Asia. It’s a nematode, a relative of the roundworm you might have had while you were a kid. And like the roundworm it lives inside your body.

Only, unlike the roundworm, it doesn’t hang around inside your intestines, waiting for you to eat, and then drawing off its share of the proceeds. Dracunculus medinensis is more sophisticated than that.

How? Well, to start off with, the worm doesn’t wait for you to accidentally swallow its eggs so you infect yourself at random. No, it goes out of its way to make sure you give its babies a chance of life.

Here’s how it happens. River and lake water have all kinds of tiny, tiny creatures in them – algae, protozoa, but also several kinds of tiny crustaceans called copepods, like miniature transparent shrimp, which feed on those protozoans and algae. And some of these, Cyclops for instance, can also swallow newborn Dracunculus larvae, which are very, very small, and give them an incubator and home.

How do Dracunculus larvae get into the water for Cyclops to eat? This is my story, so let me tell it to you my way. For now, just keep in mind that the little larvae will grow through two stages inside the crustacean, instead of, you know, getting digested and assimilated. And then they lie there, ready, waiting.

Waiting for what? For you, of course.

Suppose you get thirsty, and there’s no Evian in your fancy water bottle. So you drink water from the river or lake, just like that. If you do, you might swallow one or more Cyclops – you wouldn’t know it, they’re fairly small. And it’s just too bad if you’re a vegan, you just broke your vow.

Anyway, so you’ve drunk river water with a family of Cyclops. It’s not totally impossible that some of those Cyclops have larvae waiting inside them. And the Cyclops are now inside your stomach, where your enzymes, you know, digest the poor things alive.

Now this is what the larvae have been eagerly waiting for. Set at liberty from the copepod-shaped prison, they crawl into your intestines, bore through the wall – not a very difficult job, because at this stage they’re only about as thick as a hair – and find their way to your muscles. And there they rest, feed on your juices, and grow, and grow, and grow.

Boy, do they grow.

Now, the two sexes of Dracunculus look rather different. The male worms are only about four centimetres long at the most, but the females grow more than twenty times larger. That might give you guys with giantess fetishes a boost, but not the poor male Dracunculus, whose only purpose in life is to fertilise his immensely elongated girlfriend, after which she dumps him and he dies of a broken heart.

OK, OK, she moves off to fulfil the next step of her life cycle, and he dies. Fine?

Now, this sex they’re having is happening in the muscles of the body, as I said. You know, your body. The newly pregnant Ms Worm crawls off towards the skin, but not any skin. No, she’s not interested in your face or upper arm or back. Instead, she crawls down towards the lowest parts of your body – your calves, your shins, your feet. And once she arrives at her destination, she begins to fulfil her existence.

And this is how she does it – she bores a hole in your skin with her head end. Not unnaturally, having a hole in your skin hurts a little. No, make that it hurts a lot.  And the worm, by secreting chemicals which cause ulceration and intense inflammation, makes sure it hurts like all the fires of hell.

Hey, you know what Dracunculus medinensis means? The Little Dragon of Medina, that’s what.

So what’s the only way to get rid of this terrible pain? It’s to dunk the affected limb in cool, soothing water. Like, you know, the convenient river or lake nearby. And as soon as you do that, sighing with relief, your friendly neighbourhood parasite sticks her head end through that hole. Almost all her long length of body, all eighty centimetres of it, is basically one enormous uterus, and while she’s been crawling down to your ankle the uterus has been filling up with thousands upon thousands of babies. Now’s the time to set them free.

Yes, each time you soak your agonised feet in water, the larvae swim out in their thousands, doing the breast stroke and hoping to be found and eaten by some copepod. Most won’t succeed, of course, but they won’t need to. If only ten or fifteen of every hundred thousand manage to be eaten, and if only three or four of every thousand of those end up being swallowed with water, the life cycle continues, and the worm family lives happily ever after, amen.

Only it’s not so happy for you now, is it? Dracunculus can’t even be killed by anti-worm medication. You can’t yank the lady out either without her long body breaking, whereupon she’ll flood you with chemicals which might go and kill you with anaphylactic shock. No, that’s right out.

The only way to get rid of the worm is to undergo the same treatment as humanity has been following for thousands of years: Gently wrap the front end of Ms Dragon round a stick (a matchstick will do just fine) and, over a period of many, many days, twist her round and round the matchstick until all her nearly one metre comes right out. Exciting, isn’t it?

You bet it is.

So, it’s easier and better to try and stop the worm from infecting someone rather than cure the infection when it happens. Of course, if people would only drink purified mineral water priced at rates that touch the mountains they allegedly come from, nothing would happen. Or, you know, if they’d only boil the water they drank. But a huge number of people worldwide can’t find even firewood to cook food on, let alone spare it for boiling water. For them, some other solution is necessary.

Some other solution has been found. The WHO has launched a (highly successful - between 2009 and 2012 it caused a 96% drop in infections; what was that about socialised medicine being inefficient again?) scheme involving filters you can attach to the pots with which you gather water from the river. The copepods can’t get into the pots, which means their lives are spared, which is good news for them, and you can’t get the worm, which is good news for you. The only ones losing out are the worms, and yah boo sucks to them.

So – what has any of this got to do with this painting?

Look at this detail from it: 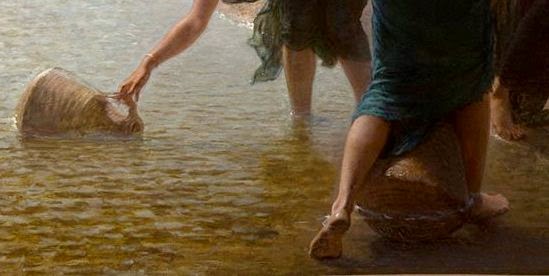 The women are standing with bare feet in the water, and drawing pots of it, presumably to drink. This was in 1856, long before the water filters, before the life cycle of Dracunculus had even been discovered. In fact, back then some “scientists” even refused to believe the creature was a worm (vide Parasite Rex, Carl Zimmer), calling it a lymphatic vessel. So, unboiled water from copepod-rich rivers at a time and place in history where Dracunculus was endemic.

I’m kind of glad the painter didn’t put any more detail in the paintings. The last thing I’d want to see is all the worm heads poking out of their dainty little ankles.

Oh, so I’m a sadist who’s ruined your enjoyment of this work of art?