As everyone knows by now, the Imperialist States of Amerikastan, under der Trümpfer, launched 59 cruise missiles at a Syrian airport last night. About two thirds of the vaunted Tomahawk missiles actually failed to hit their targets; a number were shot down while the rest fell on adjoining civilian areas. Even so, 23 out of 59 struck the airport, destroying or damaging fifteen aircraft, killing six soldiers and officers, and igniting a fuel depot.

It was perfectly obvious that this wasn’t a strike made up on the spur of the moment; this was the same air base which, according to the Zionist entity, had dared to retaliate with S200 missiles when zionazi planes had bombed Syria a few days ago. Also, this was one of the airports, in Hama province, which was actively engaging ISIS, rather than Obama’s – and now der Trümpfer’s – moderate cannibals.

Sure enough, just as they’d done earlier after America and its vassals deliberately bombed a Syrian Army base in Deir Azzor, ISIS followed immediately with an offensive. If one were of a nasty suspicious conspiracy-theorist mindset, one might almost believe that ISIS had known that the attack was going to happen and were all ready to exploit it. But that’s just paranoid conspiracy theorising, isn’t it?

The official excuse for the attack – retaliation for “Assad’s gas attacks on Syrian civilians” – is so farcical that it doesn’t stand examination for a moment. But it was, of course, an ideal excuse to start a conflict, and der Trümpfer needed this conflict. Why?

The first reason was to defang the worst, most pernicious hypocrites the world has ever seen, the Amerikastani liberal. These vermin, who had been clamouring for war with Syria all through the liberation of Aleppo, found another excuse to needle der Trümpfer for “not doing anything” when Assad was “gassing his own people”. Their deity, the blood soaked war criminal Killary Klingon, crawled out from under the garbage to bleat that she would have been “more aggressive”. Having bombed the Syrians officially – his predecessor, the mass murderer Barack Hussein Obama, had done so “by accident” - der Trümpfer took that particular wind out of their sails. Albeit for the moment only.

Why for the moment? The reason is Russia. Russia has a large military presence in Syria now, and is deeply committed to annihilating the jihadi cannibals as well as ISIS infesting the country. Russia isn’t about to let this go unpunished, and has already withdrawn cooperation from coordinating air sorties to avoid clashes over Syria. This means that if any Amerikastani plane intrudes into Syrian airspace from now on, it is fair game.

This in turn means that, whether der Trümpfer knows it or not, he is faced with a dilemma. He can either back down or continue to escalate the situation. If he backs down, the howls of outrage from the liberals will rise to the skies. “This proves he’s Putin’s puppet,” they will say. If he continues to escalate, there will be war with Russia. It’s a corner he’s painted himself into, and there’s no way he can get out of it.

Actually, there are other reasons he bombed Syria, and these are all in favour of escalation. One is to appease the zionazis, who are desperate to prevent the Syrian government from winning. The apartheid Zionist colonial regime in Occupied Palestine wants a divided, weakened Syria. It also wants a “Kurdistan”, ruled by one of the Kurdish factions it controls, so it can exploit its resources. And what the zionazi regime wants, in any Amerikastani administration since 1967 at least, the zionazi regime gets.

Then, it was to get the military industrial complex on his side. As long as der Trümpfer was claiming to want to not engage in regime change wars, the complex was deeply unhappy, because war is just about the only industry the Imperialist States of Amerikastan still has. Now, he’s as suddenly acceptable to them as George W Bush became as soon as he attacked Afghanistan. Overnight, I predict, the talk about “impeaching” Trump will disappear from the media, and he will be rehabilitated as a patriot doing the best for his country.

That’s the idea. The reality, as the first battles with Russia will amply demonstrate, will be somewhat different.

Bring on the Apocalypse.

Here are some cartoons. The first is a Statement of Gratitude. You'll agree al Qaeda has a lot to be grateful for. 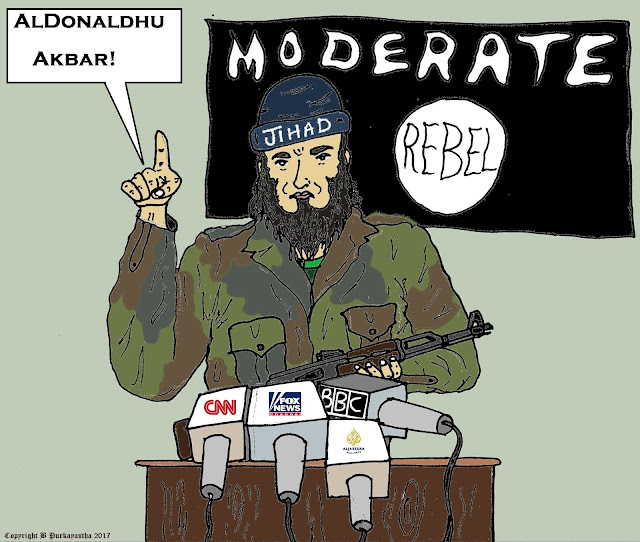 The second is actual and incontrovertible Proof Of The Syrian Regime's Chemical Holocaust. I'm sure you'll admit that we on the Assad side have no reply to it. 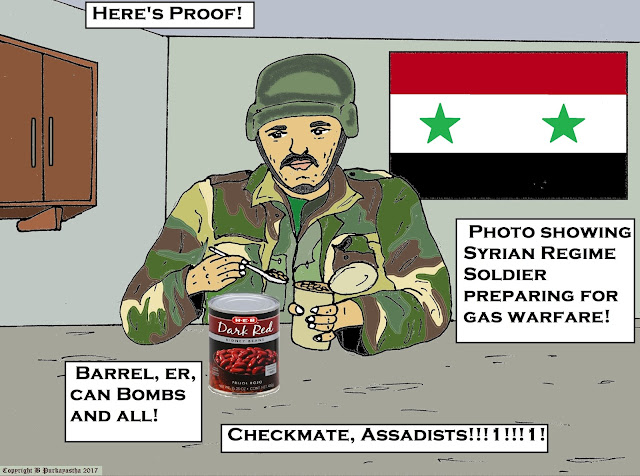 The third is the phenomenon of al Qaeda's Air Force, which in 2001 comprised four hijacked aeroplanes and now consist of the entirety of NATO. I hope Americans are happy and proud of this. I know al Qaeda are. 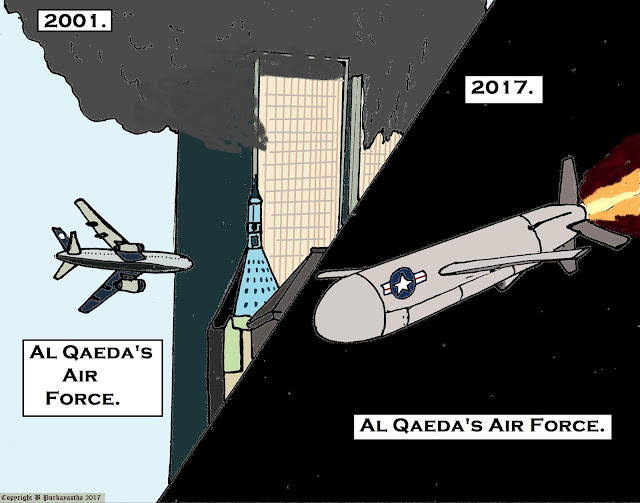 And the fourth is the Rescue Mission which the Emperor of the World had to embark on in Syria. You know how it is. 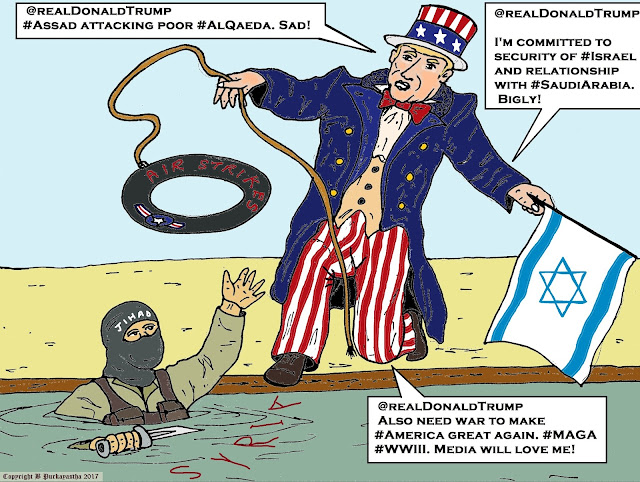