Imagine you’re at the rim of a deep, deep well – a well that’s almost bottomless, but not quite. It’s filled with sluggish, dank, liquid that is so dead that it has nothing in it, not even microorganisms – nothing so life-affirming as a bacterium. You can see this liquid if you look over the edge of the well, but you don’t want to.

The thing is, you don’t have a choice.

Oh, you know this well. You know it very thoroughly. You know what it’s like to sink into it, feeling yourself drop into the airless dark, struggling and yet knowing that the struggle will do no good. You know that in the end you’ll be at the bottom of an insurmountable shaft of darkness, filled with cold and despair.

You would do anything to not fall into this well again. You would do anything to turn round and walk away. But you can already feel the ground beneath your feet soften and turn slippery, like wet rubber; you can feel yourself slipping, sliding, falling, towards the edge. However hard you struggle, it does no good; you know you’re going to end up in the dank liquid, falling through it anyway.

Imagine. Imagine that you’re watching a movie, one of your favourites, on your laptop, let’s say; something totally innocuous, such as Run Lola Run or Monsters Inc. – and out of nowhere you find yourself sobbing your heart out, bent over with your arms tight around yourself, crying as though your heart will break, crying as though your heart has been broken into a million pieces and will never be put together again, crying until you can’t breathe, and then pausing for breath only in order to cry again.

Can’t imagine? Well, then, let’s  imagine you’re lying awake in the middle of the night, looking up into the darkness, unable even to blink or move, as though you’re a fly trapped in amber, only the amber is an airless block of silence and despair. Imagine playing back your life, thinking about scenes from your childhood, only the memories bring a bitter, aching pain at the back of your throat. Imagine wishing you had never been born, not just once in a while, but every moment of every day. Imagine wishing your suicide attempts as a teenager had succeeded, and how much better it would have been for you if you were dead. And then imagine your mother telling you, after you survived the last of those attempts, that you were “insane” and belonged in an asylum.

Imagine thinking about your achievements, such as they are; a couple of books, some stories, which those who read them said made them happy, sometimes; but not you, not you. Because you’ve done writing them, they’re in the past, they’re what you already did, not something that you can still do; because you know that you’re only as good as the last thing you did, and that it’s all down, down, into that pit, and that you can never come back all the way again.

Can you imagine this? Can you think of what it feels like to know – not think, not feel, but to know – that you’d be much happier if you could choose to die and set yourself free? And can you imagine, in this state, to have to talk to people, function like a normal human, and try and go on for days to weeks until you start to feel better again?

But, oh, that “feeling better” isn’t all it’s cut out to be either; because you know that you’ll never climb quite all the way back. Even when you’re out of the well and on to the plain, it’s all grey dust, not shining silver, and the sky overhead has not a single star; and the reason is, you know, as sure as the night follows the day, that you will fall into the well again.

Imagine. Imagine thinking over how you could have made your life differently, the choices you might have made, obsessing over them until you feel like tearing out your own throat in order to get rid of the pain of it. Imagine that the only comfort you can find is your dog licking away your tears and nuzzling you, troubled at the stink of grief coming from your body.

Are you done imagining yet?

I don’t think you can comprehend what it is to lie awake at 3 am, dreading the day to come, and telling yourself that you need to stay alive just a few more days, and then you’ll see. I don’t think you can understand the state of mind where you’re walking along the street and you have a flash of yourself with blood pouring from your shattered skull, and the only thing that distresses you about this is that you know that it wouldn’t be fatal.

Can you understand what it is like to find pain in every little thing?

Can you know what it is to wake from a dream in which you were made to kneel with your neck on a leather pad and then your head was chopped off? How about then seeing your own skull on display, and then wandering through your empty house, the rooms stripped bare, wishing you were anywhere else, and knowing you could never leave? How about having dreams like that over and over again, until even sleep held only despair for you?

If you don’t know what that means, if you have never felt that, I am happy for you, and I hope you never will.

So what can you do?

Just be there. We may not be like you, but we’re human too. We have needs, and a shoulder to cry on. We need a touch of a hand on our cheek, someone to listen even though they can’t understand, someone to cry when we do.

If you can’t do that, then just leave the depressed person alone. Because anything else you do will merely cause us even more pain. And, really, we don’t need that.

You know what the Hippocratic Oath says? First, do no harm.

How do we cope? We don’t, not really. We just hang on in quiet desperation, knowing that it won’t go away. But we hang on. Somehow.

Thank you for reading this. Normal service on this blog will resume tomorrow.

All the best to you all. 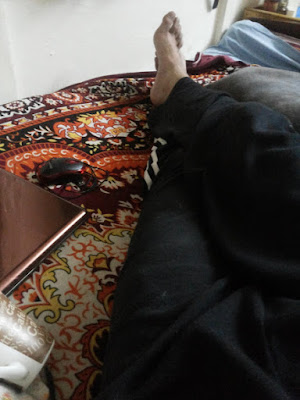